University researchers have found that early planting is critical to producing high soybean yields. Data collected from the first five years of the Michigan Soybean Yield Contest supports these findings. The average planting date for the top five producers from each of the past five years was May 4 – 13 days earlier than the average planting date for the low-yield producers. The ideal planting window for soybeans is basically the same as it is for corn – the first week of May for the lower half of the Lower Peninsula. However, if soil conditions are favorable and producers manage the crop carefully, soybeans planted during the last week of April can perform as well as beans planted during the first week of May. This article will focus on the benefits of planting soybeans early.

The most important benefit from planting soybeans early is higher yields. Researchers at the University of Wisconsin found that soybean yields decrease by 0.4 of a bushel per acre per day when planting is delayed past the first week of May. University of Nebraska research showed that yield losses of 0.25 bushels per acre occur in years with poor growing conditions and losses of 0.6 bushels per acre occur under good growing conditions each day that planting is delayed after May 1. Research conducted by Iowa State University found that the yield benefit of planting early is greater on highly productive soils.

Dr. James Specht at the University of Nebraska has identified the following reasons for the yield increases associated with early-planted soybeans:

Another advantage of early planting is that it provides a longer planting window for attaining maximum yields. If managed properly, soybeans planted during the last week of April can produce similar yields as those planted during the first week of May. This is important as some of our best planting conditions in recent years have occurred in April. 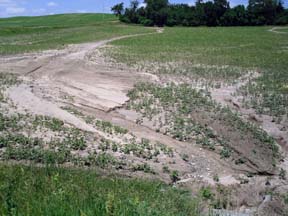 Since early-planted soybeans produce a larger and denser crop canopy earlier in the season, early planting can also play a critical role in reducing soil erosion and sedimentation. Photo 1 was taken after a significant rainfall event occurred in late June. Note the size of the soybean plants. If this field could have been planted around May 1, the larger crop canopy and root systems would have reduced the soil losses.

How does flooding affect soybean germination?