Potato leafhoppers are an important pest of chestnuts and can cause significant damage when left unchecked.

Like many plants, chestnuts are sensitive to the saliva of potato leafhoppers that is injected by the insect while feeding. Damage to leaf tissue can cause reduced photosynthesis, which can impact production and quality and damage the tree. Most injury occurs on new tissue on shoot terminals with potato leafhoppers feeding near the edges of the leaves using piercing-sucking mouthparts. 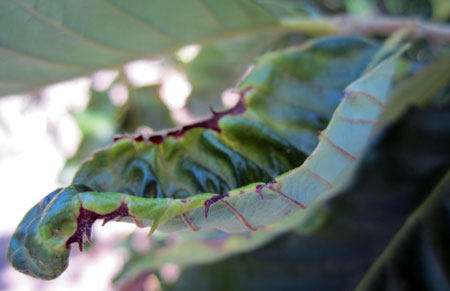 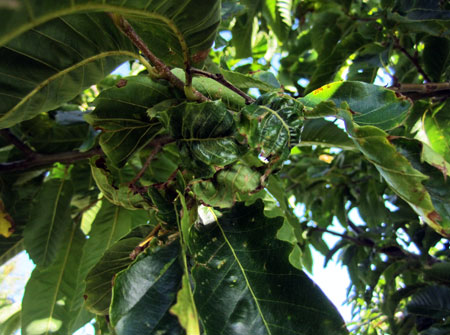 Adult leafhoppers are pale to bright green and about 1/8 inch long (Photo 3). Adults are easily noticeable, jumping, flying or running when agitated. The nymphs (immature leafhoppers) are pale green and have no wings, but are very similar in form to the adults. 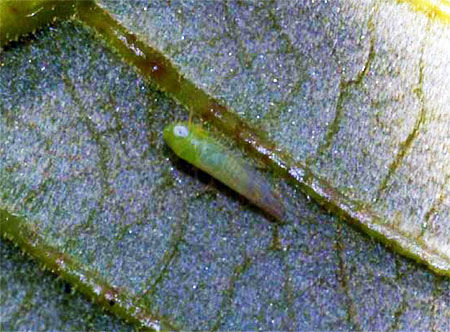 Potato leafhoppers move in all directions when disturbed, unlike some leafhoppers that have a distinct pattern of movement. Potato leafhoppers can’t survive Michigan’s winter and survive in the Gulf States until adults migrate north in the spring on storm systems.

Scouting should be performed weekly as soon as leaf tissue is present to ensure detection early and prevent injury. More frequent spot checks should be done following rain storms which carry the first populations north. For every acre of orchard, Michigan State University Extension says to select five trees to examine and inspect the leaves on three shoots per tree (a total of 15 shoots per acre). The easiest way to observe potato leafhoppers is by flipping the shoots or leaves over and looking for adults and nymphs on the underside of leaves. Pay special attention to succulent new leaves on the terminals of branches.

The most common classes of insecticides recommended for control of potato leafhoppers include the pyrethroids, carbamates, neonicotinoids and organophosphates (Table 1). Carbamates and organophosphates are broad spectrum and can disrupt natural enemies, so only use when necessary to rotate insecticidal mode of action or to target another pest at the same time. Pyrethroids are also effective at controlling potato leafhoppers and remain relatively inexpensive. However, pyrethroids have been shown to cause increases in mite populations in other crops and should be used judiciously, particularly early in the season when mite populations have time to build over the season. Neonicotinoids are longer lasting and narrow spectrum making them a solid choice for management.

** Products containing these active ingredients are classified as a restricted use pesticides and require the applicator to retain a pesticide applicator license.
1. Supplemental label subject to annual renewal.
2. For use on nonbearing trees only.

This document is meant as a starting point. Keep in mind that pesticide labels and registrations are constantly changing and always use the label as the final authority on proper use.