While it appears unlikely psyllids will bring zebra chip disease to Michigan, here is the background and management information on this pest

Potato psyllids have never been officially recorded or confirmed in Michigan. This insect is a native of North America and occurs principally in the Rocky Mountains from Colorado, New Mexico, Arizona and Nevada, north to Utah, Wyoming, Idaho, Montana, Alberta and Saskatchewan. However, it occasionally has been reported as far west as California, British Columbia and as far east as Minnesota and Quebec. They have also been documented in Oklahoma, Kansas, Nebraska, South Dakota and North Dakota. This insect also occurs in Mexico. It overwinters only in the southern most United States (Texas, New Mexico, Arizona, California) and in Mexico. Psyllids tend to migrate with the wind and high temperatures in late spring to northerly regions.

“Psyllid yellows” was previously thought to be caused by a toxin found in the insect’s saliva. It was recently discovered that this factor is not a toxin, but a bacterium that causes zebra chip disease and plant yellowing. Zebra chip disease has not been recorded in states east of the Mississippi. Zebra chip causes stripes in potato tubers that render processed fries unmarketable. Foliar symptoms include upward rolling of the young leaves, yellowing along the midrib and leaf margins, and stem elongation may be suppressed so plants look dwarfed (See Photo 1). Psyllids not infected with the bacterium do not cause potato chip discoloration. Potato seed is not known to be a source of zebra chip. 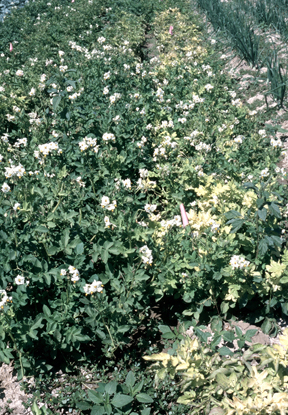 Photo 1. Potatoes on the left are healthy;
potatoes on the right are showing symptoms
of psyllid damage. Photo credit: Whitney Cranshaw,
www.bugwood.org

The Atlantic variety is particularly susceptible to potato psyllids, but all known varieties are susceptible to different degrees. Sampling for psyllids is usually focused on field edges. Adult potato psyllids are most often sampled with yellow sticky traps or sweep nets. Nymphs are relatively immobile and are sampled by randomly picking leaves from the upper third portion of the plant and looking at the underside of leaves.

Psyllids are very difficult to see with the naked eye so a hand lens is recommended for detection and identification. Adult potato psyllids can be separated from other insects caught in sweep nets because they are banded and readily jump much like potato flea beetles. Adult potato psyllids are small (2 mm long) and look like small cicadas with clear wings held roof-like over the body at rest. They have a broad, white band across their back (Photo 2). Psyllid nymphs (immature) feed on the underside of leaves; they are flat, green with a fringe of spines around the edges (Photo 3). 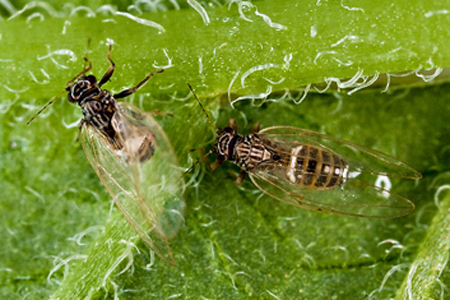 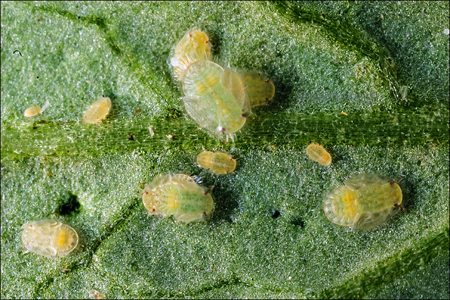 During the growing season, a treatment would be warranted if an average of one to two psyllids per leaf or 10 per plant is observed.

Several insecticides are available for the control of psyllids in potato. Agrimek (abamectin) is an insect growth regulator and has excellent activity on psyllids, but has a short residual. Abamectin also is effective and is not harmful to most beneficials.

Movento (spirotetramat) and Oberon 2SC (spiromesifen) are active on first to fourth instar nymphs and belong to the Group 23 insecticide (inhibitor of lipid synthesis and growth regulation).

The following website, (http://www.plantmanagementnetwork.org/edcenter/seminars/potato/ZebraChip/) has a 19-minute online presentation that explains how to identify and understand the basic aspects of zebra chip. It includes numerous color photos of disease symptoms, explains the field aspects including host range, pathogen and vector, and management practices.