Potato plants can become systemically infected with viruses following mechanical transmission or through vectors. Viruses decrease plant vigor and cause mottling, chlorosis and necrosis. Yields are decreased and some viruses cause internal tuber symptoms which can be seen after the affected tuber is cut or peeled. Such crops completely lose their value even though a small proportion of tubers are affected. Some viruses may rapidly kill plants, whereas others cause mild or no symptoms at all and the reaction of different varieties to the same virus can vary. Photosynthetic capability and yield is reduced, but more recently there has been a worldwide increase in viruses that cause tuber necrotic symptoms such as Tobacco rattle virus (corky ring spot) and PMTV (potato mop top virus). Corky ring spot has now been reported in Michigan, but PMTV is confined at present to China, Japan, Northern Europe and Canada but has been reported in Maine. A recent study from the United Kingdom has indicated that PMTV may be principally soil-borne. 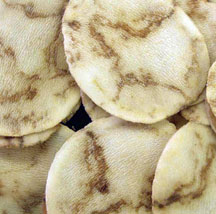 Arcs on potatoes caused by virus.

In Michigan, the most common virus problems are aphid-transmitted diseases such as PVY and its variants. Viral symptoms can be quite different in the year when plants become infected (primary symptoms) from those in plants derived from infected seed (secondary symptoms). For example PVY (severe mosaic), transmitted by aphids such as the soybean aphid, may nearly defoliate potato plants within four weeks after infection and decrease yield. These seed tubers become viral hosts for the following season. The percentage of tubers infected is established during winter grow-outs each year and seedlots can be downgraded if they fail to meet standards. In the following season, plants from infected seed are severely stunted, mottled and die early limiting yield with a high proportion of small tubers.

The primary symptoms of some virus infections are mild or, if infection occurs late, plants may show no symptoms. Infected tubers may produce plants with severe symptoms in the following season. Plants infected during the growing season with leaf roll virus transmitted by aphids may show slight rolling of upper leaves, often only on one stem. In the next season, leaf roll infected tubers produce stunted plants with rolled lower leaves that are thickened and brittle. In Michigan, a reduction in leaf roll has occurred due to the use of neonictinoid insecticides that has effectively controlled viruleferous aphids.

Some viruses produce mild symptoms or none at all in both seasons. Virus X transmitted mechanically by leaf contact, machinery or on clothing, may produce no symptoms whereas in some varieties it causes leaf mottles but does not affect plant vigor or yield. Plants infected with Virus A, also transmitted by aphids, show mild symptoms but in association with Virus X or Y can cause crinkle symptoms. The co-infection of plants with some of PVY and PVO or PVS has resulted in complex reactions that have lead to the appearance of some tuber necrotic strains of PVY known as PVTntn, which can cause necrosis in tubers.

In Michigan, when tubers were removed from storages in 2007, substantial internal necrosis was observed in 1-2 percent of the tubers. Symptoms included arcs similar to those caused by TRV (Figure 1). This virus is a member of the genus Tobravirus and is transmitted by a number of species of stubby-root nematodes (Paratrichodorus or Trichodorus spp.). Stubby-root nematodes have been previously reported from Michigan. Corky ringspot can result in substantial losses, with entire potato fields being rejected due to internal tuber damage. Once found, fields are considered permanently at risk to this disease due to the large host range of both the virus and the nematode vector. This disease has been previously found in the United States in California, Colorado, Florida, Idaho, Washington, Oregon and likely in Indiana.

Management of virus diseases in potato is complicated due to the various vectors that are involved in transmission. Management practices include exclusion and sanitation. Planting of certified seed is generally accepted as the best practice for potato production and growers planting non-certified seed are at risk from virus diseases. Varieties that are immune to a particular virus should be planted, but there is limited knowledge on varietal responses to many of the viruses although Eva, Dark Red Norland, Belrus, HiLite Russet, Kennebec, Monona, Norwis, and Sebago have some resistance or tolerance to PVY. Some varieties of potatoes are susceptible to particular viruses but do not show clear symptoms (Shepody and Russet Norkotah are symptomless carriers of PVY). This can cause problems in susceptible varieties that express symptoms such as leaf necrosis, internode stunting and tuber necrosis. Where possible seed stocks with the lowest virus counts should be planted, PVY is nonpersistent but is transmitted quickly by aphids and insecticides are generally ineffective. Frequent application of mineral oils can be used to reduce spread of PVY by aphids. Reduction of human and mechanical traffic through the field can limit mechanical spread (especially for PVX). Roguing of symptomatic plants and removal of Solanaceous plants such as nightshade and ground cherry with herbicides can help reduce disease.

Nematode vectored viruses such as TRV may be transmitted at the root tip into potato plants, then move to the tubers. The use of a nematicide such as oxamyl (Vydate L-CV) at planting followed by further post-emergence applications; (max 2.5 gal/season) are recommended in western states where the nematodes and virus are established. Soil should be sampled to determine presence of nematodes that transmit TRV. TRV can survive in dormant nematodes for two to four years and nematode populations increase on cereal crops, so rotations should not include them. The use of rotational non-host crops (spearmint and alfalfa) has had limited success in western states. Shepherd's purse and chickweed are viral-reservoirs therefore applications of effective herbicides can limit viral increase. We are currently developing a research program for TRV management in Michigan and will be able in the future to test stubby root nematodes for presence of TRV.

Who is eating the produce that I grow?

Dealing with water for irrigating