Eastern or Canada Hemlock is a unique and important tree species in regards to its visual beauty, wildlife habitat and environmental benefits in Michigan.

Hemlock trees – when properly cultured and cared for in the landscape – are unique, attractive specimens. They can be planted as solitary trees or can be grown as shrubs and hedged. In fact, noted horticulturist Dr. Michael Dirr (University of Georgia) describes Canada hemlock (Tsuga canadensis) as one of “the most graceful and beautiful of large evergreen conifers” and “one of our best evergreens” for landscape use.

In more forested settings, Canada hemlocks can be found growing amongst sugar maples and beech trees in hardwood forests. The dark-green foliage of hemlocks offers a visual contrast to the lighter green foliage of hardwood trees around them. In winter, when the hardwood trees have shed their leaves, hemlocks stand as evergreen sentinels – offering some “color” versus the grays and browns of the dormant forest.

In the Upper Peninsula, hemlock can often be found growing in more pure stands on wetter sites. In this setting, hemlocks may blend in color-wise with other “swamp conifers” such as

balsam fir or northern white cedar. But on these sites, hemlocks play a significant role in providing wildlife habitat and other environmental benefits within streamside areas or riparian zones along lakes and streams.

Consequently, Michigan residents should be concerned about the impact that an invasive forest pest known as hemlock woolly adelgid can have on hemlocks growing in Michigan. Loss of this tree species would indeed be significant in Michigan – where over 170 million native hemlocks are growing. This invasive insect has already killed thousands of hemlocks in the eastern United States. 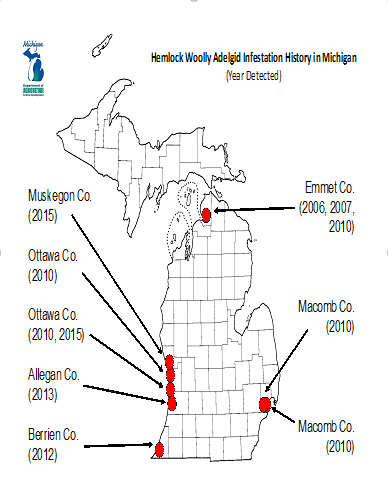 Prior to 2015, hemlock woolly adelgid was not known to be in Michigan. Despite numerous scares over the last decade from accidental introductions on infested nursery stock, plant pest officials in Michigan believed that in each case that the infected nursery stock had been intercepted and dealt with before the insect could escape from the infected stock into adjacent areas.

So Michigan residents – especially in on the west side of the lower peninsula – are encouraged to keep an eye out for the hemlock woolly adelgid. The most typical symptom is the presence of small, cottony masses at the base of needles on the twigs of hemlock trees. 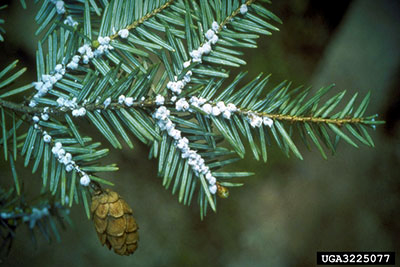 These small adelgid insects suck on the sap of hemlock trees causing a tree to slowly lose its vigor over time. As the insect continues to feed and spread throughout a tree, the needles will turn gray and begin to shed. From a distance, a tree will look very stressed and unhealthy as its foliage thins out and bare branches are exposed. Over time, severely infested trees will die.

One way that Michigan residents can help monitor for the presence of hemlock woolly adelgid is to become a Michigan Sentinel Tree volunteer under the Michigan State University Extension Eyes on the Forest project. The Sentinel Tree network is an easy way for volunteers to report on-line (through MISIN) what they are seeing in their own yards or woods. Under this project, Sentinel Tree volunteers can also sign-up to watch and report upon any number of tree species in which they have an interest in monitoring.

Invasive species are costly in economic and ecological damage, further introductions must be avoided