One of the most exciting things about spring arriving is that farmers can get out in the field and frost seed red clover into their wheat stand. As I write this (March 5, 2013), we are in the midst of a major snowstorm in southwest Michigan, so while you’re bundled up, you can plan on when to frost seed.

The Michigan State University Extension cover crop program has had excellent results frost seeding both mammoth and intermediate red clover in wheat. We have evaluated several different seeding rates from 6 to 18 pounds per acre. The most consistent stands of red clover have resulted when we have seeded 12 pounds to the acre. Many farmers now are using ATVs with spinners to seed red clover into wheat. Since the ATVs are lightweight, you can cover a lot of ground without causing compaction.

It is important that the snow melts prior to frost seeding. Deep snow will cause the seed to move to the lower areas in the field which could result in poor stands of red clover. Another important component is to inoculate your red clover seed. This will assure that you have good nodulation. Good nodulation is important to maximize nitrogen production from the red clover.

As seen in Figure 1, having wheat in your field crop rotation enhances corn yield. Diversifying by including wheat in the rotation has been shown to provide a 25-bushel yield benefit to corn. 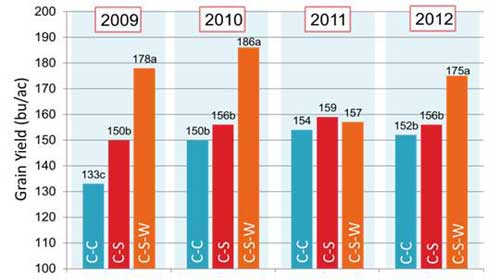 When red clover is frost seeded into wheat, the same University of Guelph study found on average an 8 bushel per acre increase in corn yield (Figure 2). 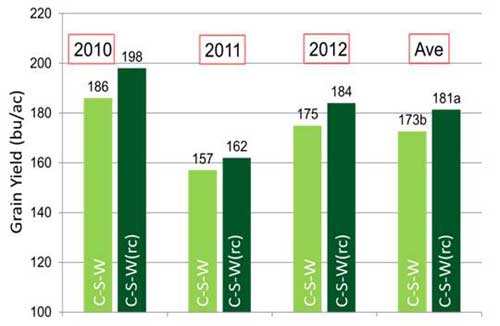 Red clover can enhance corn yield without reducing wheat yields. We have seen up to 120 pounds per acre nitrogen credit by frost seeding red clover into wheat.

For more detailed information on red clover, read the publication “Using red clover as a cover crop in wheat.”