Knowing the host range and pattern of symptoms of needlecast diseases in conifers is critical to their accurate diagnosis and management.

Preventing needlecast and tip blight diseases in the nursery or landscape requires regular scouting sanitation, proper planning and overall best management practices. When planting a new field, consider increasing your spacing between trees. If trees are planted too close, it decreases air circulation and increases the conditions that are favorable for disease development. Also, consider if the new area is prone to flooding, drought or if the soil is compacted. Plants that are more stressed under these conditions are more prone to diseases, as well as other pest problems.

Knowing the range of hosts that fungi can infect and examining the pattern within the specimen can be the first key to diagnosing the problem. Sphaeropsis, Rhizosphaera and Dothistroma have different hosts. Sphaeropsis tip blight, for example, affects species in the genus Pinus. It most frequently and severely infects Austrian pine (P. nigra). Likewise, Dothistroma needlecast also infects pine species. In contrast, Rhizosphaera needlecast affects spruces, especially the Colorado blue spruce (Picea pungens). Knowing the type of tree expressing the symptoms will help narrow down which is the culprit disease.

Sphaeropsis, Rhizosphaera and Dothistroma are expressed by the host differently. Sphaeropsis will infect the new growth as it begins to grow in the spring. This growth or tips of shoots will eventually turn brown and die (Photo 1). Dothistroma needlecast disease often causes the browning on individual needle tips as opposed to the whole shoot. Needles remain green towards the shoot stem (Photo 2). In contrast, Rhizosphaera causes the browning and needle drop in the older growth closer to the trunk of the tree, especially on the lower limbs (Photo 3). 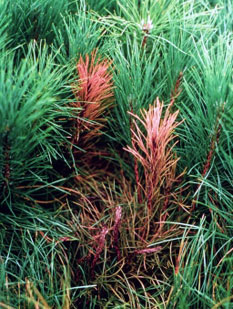 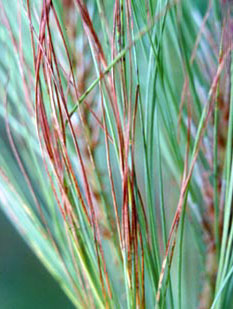 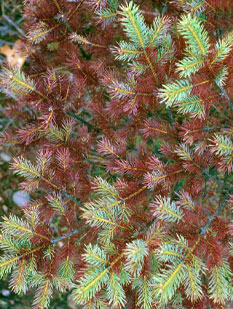 If you find a needlecast or tip blight disease in a nursery, evaluate the extent of the problem. If the damage from the disease is in a relatively small area, prune out the infected branches when the foliage is dry. Be sure to sanitize the pruners before using them on healthy limbs of other nursery stock. In order to get an accurate identification, be sure to send a sample to a diagnostic clinic such as MSU Diagnostic Services. Knowing the disease type will allow you to choose a chemical management strategy, if necessary, to best deal with the problem. Spray regimens with active ingredients, such as chlorothalonil, mancozeb, copper or thiophanate methyl, prevent the further spread of disease on the new growth and to other trees in the nursery.