In recent years, obliquebanded leafroller (OBLR) has been observed more commonly in both sweet and tart cherry. These insects are not internal feeders in the fruit, and although they can cause some damage from defoliation, the greater concern is the threat as a contamination pest if they are found in cherry tanks at harvest. Despite the fact that the larvae are easily visible either in the tank or at the processor, growers need to take precautionary measures to prevent these insects from infesting the harvestable fruit. Growers with problem orchards risk having tank-loads rejected at the processor if OBLR larvae are present.

The likely reason for the rise in obliquebanded leafroller’s in cherry orchards is organophosphate resistance. Organophosphate-resistance was documented in OBLR in Michigan in the early 2000s, primarily in apple orchards. Because of OP-resistance in OBLR, as well as in codling moth in apples, most apple growers have moved away or minimized OP use in their pest management programs. On the other hand, OP’s are still the backbone of the insecticide program in most sweet and tart cherry orchards. We hypothesize continued OP use is the reason for increasing OBLR populations in cherry orchards over the past three to five years, while we have seen no increase in population in apples as growers have moved to other classes of insecticides, and as a result, are controlling OBLR.

Fortunately, there are several new insecticides that have been efficacious against OBLR, labeled for both apple and cherry. However, optimizing the timing of insecticide applications to effectively target these pests in cherry can be a challenge. There are two optimal times for control: spring and just prior to harvest. Obliquebanded leafroller overwinter as small larvae – within a hibernaculum – in cracks and crevices of the tree. In spring, when temperatures warm, overwintering larvae move out to feed on buds and emerging leaves, and as leaves expand, larvae web and roll leaves where they remain concealed except when feeding.

Targeting this overwintering generation is an effective strategy, particularly as these larvae are small, hence easier to kill, at this time. At early petal fall, growers should scout their orchards by looking at 20 clusters per tree in five trees per orchard for larvae or feeding sites. An insecticide should be applied if they observe more than two larvae or feeding sites per tree. The materials that target this life stage are Delegate, Belt, Altacor, Voliam flexi, Entrust and Bts (Table 1). In most cases, growers should not expect OP’s or pyrethroids (due to OP-cross resistance) to provide effective control because of insecticide resistance. If there is evidence of OP resistance in your area, the insect growth regulator Intrepid may also have some level of cross resistance and will not be effective. 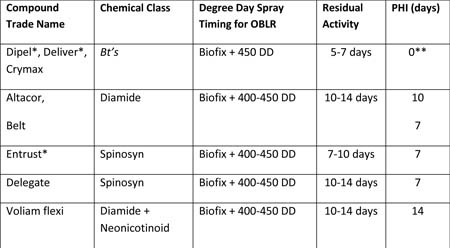 * OMRI approved.
** Not recommended for pre-harvest sprays to prevent OBLR contamination
because of slow action.

If larvae are not controlled in early spring, they will roll leaves and pupate. Summer generation adults will emerge from mid-June through mid-July. Growers should be scouting for adult flight with pheromone traps. However, because of OBLR’s wide host range, trap catch interpretation can be difficult due to the sheer number of moths caught. Nonetheless, MSU has developed some rules of thumb for OBLR trap catch:

Growers should use traps to set a biofix by using MSU’s Enviroweather system. After adult emergence, growers should begin monitoring the ripening crop for summer generation larvae. These larvae have the potential to infest the crop during harvest. Growers should look at 10 fruit clusters and 10 terminals on five trees per orchard each week and should apply an insecticide if three larvae per tree are found. Monitoring should intensify as harvest approaches to help ensure larvae-free cherry tanks. The insecticides that we recommend for use at pre-harvest time are Delegate, Altacor, Belt and Voliam flexi. For organic growers, we recommend Entrust. All of these insecticides have shown to be excellent against OBLR. Because of their slower activity, the Bts may not eliminate canopy infestation sufficiently to prevent contamination from a pre-harvest spray. OP’s should not be used to control the summer generation, just as with the overwintering generation.

This insect has been on the rise in Michigan cherry orchards and growers should be able to identify both the larval and adult stage of this pest. The larvae are caterpillars with a dark head capsule that appears flattened while the body can be green to brown in color (Photo 1). Adults are tan and striped and have a distinctive bell shaped appearance to their wings (Photo 2). Again, we recommend all cherry growers be on the lookout for OBLR this season, particularly in light of some infestations during 2010. 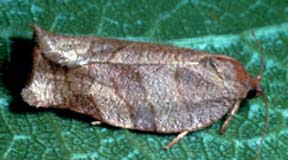