An affliction to river birch trees (Betula nigra) growing in the landscape was noticed in Cheboygan and Emmet counties this summer. The trees appear to have what has been described by others, including John Ruter (Univeristy of Georgia), as mouse ear, squirrel ear, little leaf or leaf curl. His description of symptoms are similar to the ones now appearing, “The leaves are small, wrinkled, often darker green in color, commonly cupped and have necrotic margins. Interveinal chlorosis is generally lacking in symptomatic leaves. New growth also has severely shortened internodes which gives a witches-broom appearance.”

In 2003, this was apparently an important problem in nurseries of southern states. At that time, it was rarely seen in landscape trees. In fact, potted plants showing the symptoms of mouse ear generally grew out of the problem once they were removed from pots and planted in native soils. This summer, I have seen this problem on both older landscape trees (8 to 20-years in place; Photos 1, 2, and 3) and five gallon potted one-year-old nursery trees (Photos 4). In both landscape and potted trees, one, two or all three of the stems may be afflicted. There is evidence that some landscape trees have had the problem for more than three years. Stems appear to vary in severity of symptoms. Some stems may be completely overtaken by the problem or the stems may have only a few branches involved.

One 19-year-in-place clump in the courtyard of a house in Cheboygan County showed moderate symptoms, while several other trees along the foundation of the house and in the back near a lake showed no symptoms. At another house nearby, most of the river birch showed moderate to severe symptoms. A survey of river birch at a local nursery in the mid-Michigan area indicated that many stems of the one-year-old plants in five-gallon pots had symptoms. As in the field, sometimes all the stems were involved but more often only a few branches on a couple of the stems showed symptoms. The pH of all soils tested from symptomatic plants was close to or above pH 7 and many were closer to pH 8. The potted nursery material had been treated with elemental sulfur to reduce the pH, and the pH of the potting medium at the surface was 5. However, just half way down the pot and at the bottom of the pots, the pH was above 7 indicating the sulfur was having little effect around the roots.

In 2003, Ruter announced that treatment with nickel brought the potted stems back to normal growth, but that was not attempted with landscape-grown plants. Diseased plant materials have been sent to MSU Diagnostics Services and we will attempt to determine the cause of the problem. At this time, we believe it is too early and unwarranted to treat with nickel-based products. 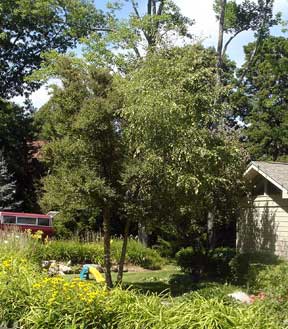 Figure 1. River birch afflicted with new
problem. Two stems on left have a witches-
broom appearance and the stem on the right
is normal in appearance. 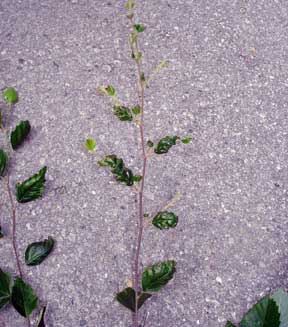 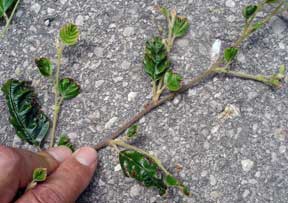 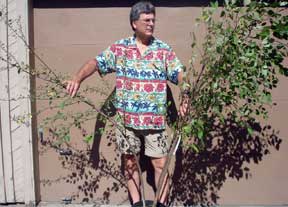