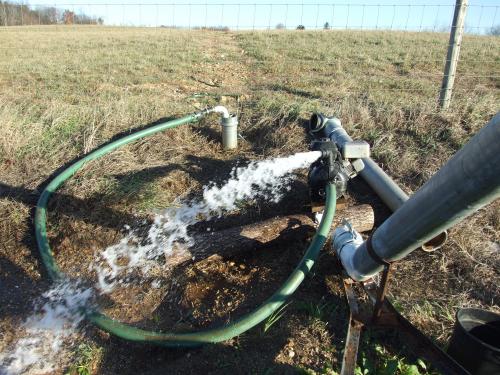 Irrigation risers from underground lines often cost $200-$300. Z pipes, pivot elbows and center pipe can cost the farm more than $600 each and all are common irrigation freeze damage repairs. Often next year’s irrigation startup problems are winter damage that can be prevented. Time spent now will prevent damage and lead to a better start on next year’s irrigation season. Inspection of the system now allows you to make improvements and repairs in the less costly off season and get irrigation problems out of the way for spring planting season when everyone is busy. Steel pipes up in the air may freeze solid days before we think of freezing weather on the ground.

Park pivots in a safe location

When choosing a location to park the system for the winter, consider the three most common potential sources of winter damage: Wire theft is less likely in a visible but inaccessible area of the field; Wind damage is less likely if pivot points into or away from the wind direction rather than perpendicular to wind direction; and squirrels and other rodent damage to span wire is rare when pivots are a few hundred feet from the tree line.

Get rid of the brush and branches near equipment

Squirrel and chipmunk damage to span-wire and gasket can be minimize by removing limbs near equipment parked for the winter preventing animals jumping between trees and the structure. Trimming trees and removing brush near control panels and disconnect boxes reduces the chance of rodent damage. Removing woodchucks from the vicinity of pivot and pumping plant pads or electrical box can also help prevent damage.

Most of the currently designed pivots have automatic frost drains that drain the main overhead pipe. Solid set systems may have automatic drains but you should always inspect that water has been eliminated from the pump to the furthest ends of the system. Plugged automatic frost drains can lead to major repairs if not caught in a fall inspection. Rock traps need to be cleaned and drained, some designs may accumulate water condensing in the pipe over the winter leading to freeze cracks in rock traps that are emptied and put back in place. To avoid this issue many producers install a piece of hardware cloth held in place by the lock ring to allow condensate to leave the system. Pivot supply lines, end gun supply and hydro control hoses are often installed to allow drainage but the hose may sag and trap water which can lead to damage. Remember to cap all large openings into the system to prevent bird nesting.

Few underground piping systems require complete draining to protect from freezing in most of Michigan and Indiana. Lowering the water within the system so that the water is two to three feet below soil surface will prevent freeze damage in most situations. Water can be pushed out of the system by compressed air pumps available from most irrigation dealers or may be pumped from the underground pipe system using a common fertilizer style transfer pump. As a Michigan State University Extension and Purdue Extension irrigation educator, I have found an easy way to do this is by using a gas powered transfer pump at the lowest access point in the underground piping system. A one and one forth inch tube slid down inside a riser or two inch access in the manifold where air relief is, can be piped to the intake of the pump.

Travelers and stationary big guns often have portions of their system that hold water. Drain and roll-up hoses, unhook and drain ends couplers and drain water drive piston and motors/impeller drive systems that may be damaged by freezing.

Trickle and drip lines and tape

Trickle and drip lines and tape are designed to be self-draining but manifolds and supply systems need attention to make sure no water pockets remain to freeze. Winter rodent damage can turn usable drip tape and trickle line into junk rapidly. Lines that are to be moved for next year are best stored in the barn. Lines over wintering in the field stand less rodent damage if not covered by plastic, plant material or mulch.

Most underground pipe lines are buried deep enough to prevent freeze damage but they often require pumping or draining enough water from them to empty the upper portion of Z-pipe risers and pump manifolds. This is typically done by purging the system with air or modifying a fertilizer transfer pump to pump system at its lowest outlet or inlet points. Remember to cap all pipe inlets and outlets to prevent animals from entering.

Drain pumps and manifolds to the lowest point they can hold water. Replace brass drain plugs if damaged. Good designed pumping installations will be easy to drain without striping drain plug threads or the need for air purging. Inspect gauges, supply and control wires for needed repairs. Service the engine with attention to engine oil, bearing and seal lubrication. Check the cooling system for adequate anti-freeze level and concentration. Drain the fuel tank to reduce water accumulation in fuel tank and potential theft.

Inspect each electrical box in the system from power supply to the last pivot or disconnect on system line for damage and holes that may be accessible for rodents. Sealing small holes helps keep rodent damage to a minimum. Both snakes and mice have even been known to crawl into electrical boxes and control panels through small hole or underground conduit with unprotected ends resulting in electrical fire and damage. Locking down electrical power supplies helps prevent vandals from turning wells and pivots on midwinter and minimizes potential electrical system damage. Now is an excellent time to inspect grounding, system test resistance and make repairs.

While it is fresh in your memory list the improvements and repairs needed for each system. As you are inspecting and winterizing your system, add any other areas needing attention to the list of repairs needed. Assign the repair to someone whether it is your people or the local irrigation dealer repair crew, the sooner it gets into the plan the better and more efficient it can be.

Climate, weather and farming: What is history telling us?