Timing and method are important when considering pruning hops for disease management and yield benefits.

An important agronomic practice in established hop yards, generally at least two years of age, is spring removal of plant and crown material. This is generically referred to as pruning, which can be conducted using mechanical or chemical means. Because many of the terms are used interchangeably, it is useful to define the different methods that growers use to remove bines, buds and new young shoots (Mahaffe et al. 2009). Mechanical pruning generally refers to removal of shoots from the current or previous season and associated crown buds by physical means. There are multiple ways of mechanical pruning, such as crowning or cutting, or a less aggressive form referred to as scratching. Crowning involves removal of the top 2 to 5 cm of the new wood, part of the crown, formed in the previous season with an offset implement. See Figures 1 to 3.

Scratching involves the use of a harrow-like implement with spinning discs and tongs to remove material above or just below the soil line. See Figure 4.

Historically, hop producers in regions of Europe and the western U.S. that experience high disease pressure usually crown in late winter to early spring to reduce downy and powdery mildew inoculum. Depending on variety and weather, producers may follow up with a chemical or mechanical pruning operation later in spring after the first shoots emerge. Growers who crown typically have hilled-up soil on the crowns the previous growing season, usually in mid- to late June. Less aggressive mechanical pruning methods such as scratching do not require annual hilling of soil. While both crowning and other forms of mechanical pruning are useful for reducing mildew disease inoculum, viruses can be spread to adjacent plants through mechanical transmission. Chemical pruning with a desiccant herbicide such as carfentrazone-ethyl (AIM) can help limit the spread of virus, but any green tissue and/or infected parts left behind, may shelter inoculum if disease pressure was severe the previous year (Gent et al. 2016, 2018).

In 2012, researchers analyzed survey data from 149 hop yards in Oregon and Washington to assess the association between the thoroughness of spring pruning, timing of pruning operations and the severity of downy and powdery mildews (Gent et al. 2012). The most common pruning approach was chemical desiccation (48 percent of yards), mechanical pruning (23 percent), or a combination of these practices (15 percent). Pruning quality was rated as excellent, moderate or poor based upon the amount of foliage remaining post-pruning. Producers who indicated that they pruned twice were much more likely to receive an excellent rating compared to growers who only pruned once. Downy mildew severity in Oregon increased twofold as pruning quality dropped from excellent to poor. While pruning quality had no significant effect on powdery mildew in Oregon, increased seasonal severity of powdery mildew on leaves and incidence on cones was greater in yards with 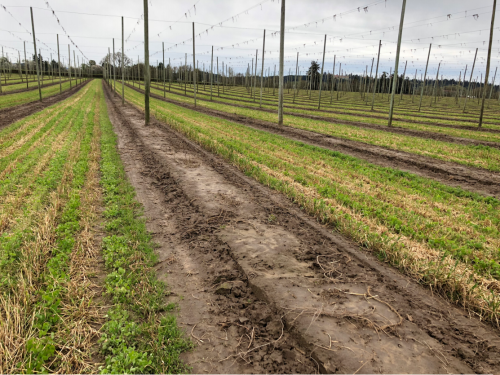 poor pruning in Washington. Depending upon timing and quality of pruning, growers may be able to eliminate one fungicide application per year. Gent et al. conclude that “…early spring sanitation measures are associated with reduced primary inoculum and are critically important for managing both downy mildew and powdery mildew.” (Gent et al. 2012, p. 1,343).

More recently, Probst et al. (2016) studied the effect of pruning timing and method on powdery mildew development, yield and hop quality in a commercial hop yard of Tomahawk in Washington.

They found that a 4-week delay in pruning reduced powdery mildew incidence on leaves from 46 percent to 10 percent and on cones from 9 percent to 1 percent.

There was no significant differences in powdery mildew incidence on leaves when chemical and mechanical pruning methods were compared. Delayed pruning for multiple years did not negatively affect cone yield, quality or appearance.

Another advantage of chemical or mechanical pruning to remove young shoots is uniformity of secondary growth in the run up to training. Because the pruning date affects training date, which is of utmost important for yield, pruning at the appropriate time is critical. To complicate matters, pruning date is cultivar dependent (Table 1). In general, hop plants can be trained approximately 3 to 4 weeks after pruning depending on how pruning was conducted. Slower growing cultivars and yards with poor vigor may need to be pruned earlier, or not at all, to ensure adequate growth and maximum yield. 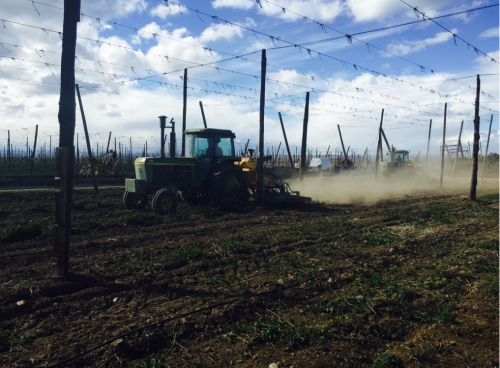 Pruning is an important agronomic practice that can have a major impact on hop yield and quality. Methods and timing of pruning will depend upon grower preference, irrigation placement and practice, cultivar, vigor of the yard, yard age, latitude and location, timing, disease severity from the previous season and seasonal growing conditions after the operations. There is no substitute for local trials and experience to determine the optimum method and timing of pruning operation. When producing a new variety, it is advisable to experiment with varying pruning dates, and by consequence then, training dates, over a period of several weeks to observe how plants respond.

2017 Agriculture Census has been extended

Pruning for disease management and yield benefits in hops