Nearly all the soybeans produced in Michigan are processed into two products: crude soybean oil and soybean meal. The oil can be further refined into a variety of marketable products including cooking oils, salad oils and industrial lubricants, and the meal is primarily sold as a high protein livestock feed.

More than 50 percent of the soybeans produced in the United States are exported and nearly 60 percent of these are imported by China. In fact, China buys nearly 45 percent of the world’s soybean exports and Chinese processors have expressed concern that soybeans produced in the United States don’t always meet the 19 percent oil and 35 percent protein standard. This has the potential to affect our share of the Chinese import market in the future because soybeans exported from Brazil average nearly 1 percent higher protein and more than 1 percent higher oil than soybeans exported from the United States. The best way to ensure that U.S. soybean producers will continue to have access to the rapidly expanding Chinese import market is to produce soybeans that consistently meet or exceed the 19 percent oil and 35 percent protein standard. For some areas of the country, this can be challenging. 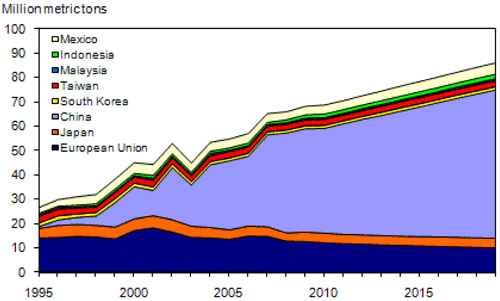 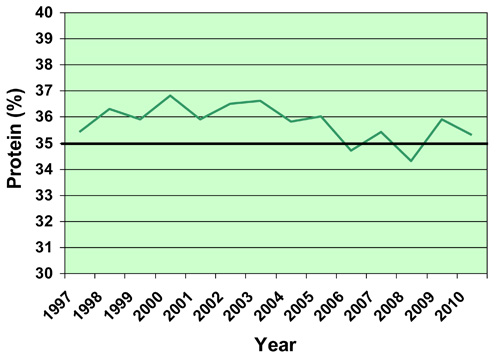 Source: The United Soybean Board.

However, oil content is another matter. Figure 3 clearly shows that soybeans produced in Michigan consistently contain less than the 19 percent oil that the Chinese market is demanding. 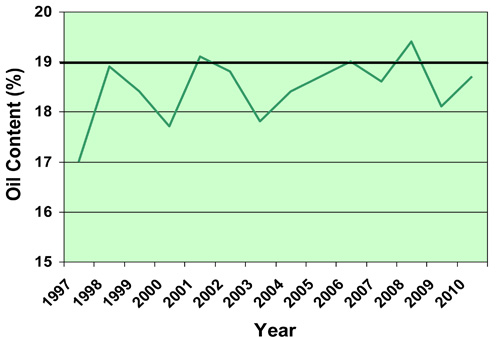 Source: The United Soybean Board.

Armed with this information, Michigan soybean producers can take the initiative in maintaining their access to the Chinese import market by selecting varieties and implementing management practices that are known to increase oil content. Variety selection will have the greatest impact on oil content so producers are encouraged to consider this characteristic along with yield, pest resistance and standability when selecting varieties for 2012. Information regarding the oil and protein content of soybean varieties is available from seed company literature and the Michigan Soybean Performance Report. Crop rotation and tillage have also been shown to affect the oil content of soybeans. The highest oil contents have occurred in no-till systems and when soybeans are planted after corn.