Recent, abnormally warm weather is putting us at least two or more weeks ahead of schedule, bringing most perennial crops and vegetation out of their protective dormant states.

Recent abnormally warm weather has resulted in a very early start to the growing season across the Great Lakes Region and much of the central and eastern USA. The trend towards warmer than normal conditions is not new, with above normal mean temperatures observed across Michigan during much of the period back to the middle of last November. The winter of 2011-2012 (December through February) was the fourth mildest on record.

The prolonged warm spell is the result of a very persistent jet stream configuration across North America that generally prevented cold, arctic-origin air masses from moving out of their high-latitude source regions southward into the central and eastern USA. This left the area under the influence of relatively mild Pacific-origin air masses. The current jet stream pattern, with deep troughing across the western USA and ridging across the east has accentuated the pattern. The result is record-breaking warmth brought northward from the Gulf States on southerly winds.

Characterizing the current warm spell as highly unusual is an understatement, both due to the magnitude of the warmth (recent high temperatures have exceeded 70ºF over many areas of the state) and due to its length. For climatological comparison, normal high temperatures during the third week of March range from the mid-30s far north to the middle to upper 40s south with lows from the mid-teens north to the upper 20s south. Thus, recent temperatures have been running in the range of 20 to 30°F or more above normal.

Short- and medium-range forecast guidance strongly suggests a general continuation of the current pattern with warmer and possibly wetter than normal weather likely through the end of the month. A map depicting forecast conditions across North America early next week is given in Figure 1. The upper air trough over western sections of the country, ridging across the Midwest and east, and strong southerly flow all suggest maximum temperatures into the 60s and 70s statewide through at least the middle of next week. Use of the latest forecast information suggests at least the potential for mean temperatures this March to exceed the existing record (1945 in most locations) for warmest on record in the state. 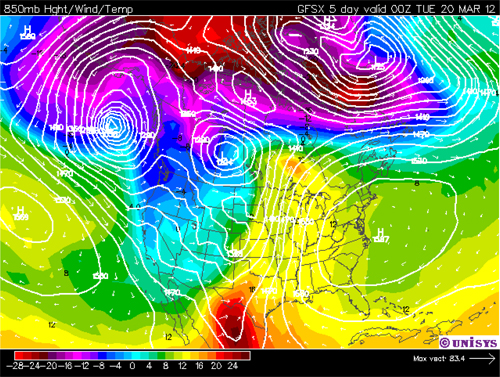 Base 50ºF growing degree accumulations during the ten warmest Marches on record at Benton Harbor, Mich., plus the current month are shown in Figure 2. A projection of accumulations through the end of March 2012 data was obtained with temperature forecasts from latest short- and medium-range National Weather Service forecast guidance, including the assumption that mean temperatures during the last week of the month averaged 10ºF above normal. With these assumptions, the GDD total by the end of the month exceeds 200 units as well as the old historical record of 146 set in 1945 and the normal value of 45. The abnormal warmth already has or will shortly bring most perennial crops and vegetation out of their protective dormant states. Given that this is taking place at least two full weeks or more ahead of normal, and that the relative susceptibility of plant tissue to frost and cold damage generally increases with increasing growth stage, there is an overall elevated risk of cold injury this spring season. 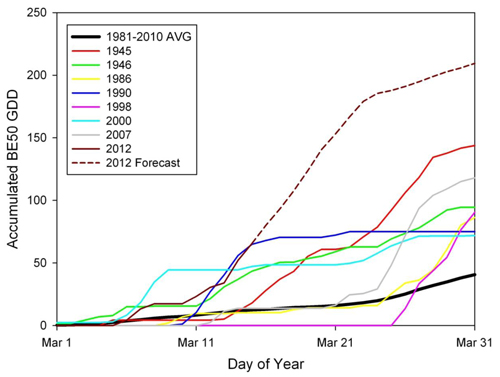 What are the chances of a hard frost?

Relative risks of spring freezing temperatures across Michigan are given in Figure 3. Even though current long lead outlooks for April and the spring season call for more of the same warm pattern across Michigan, further cold weather at some point in the next several weeks is virtually a certainty (see Figure 3). The climatological average number of daily spring freeze events (32ºF or less) after March in a given season ranges from about eight in the southwest and southeast corners of the state to more than 20 in interior northern sections of the state. In terms of hard freezes, the average number of low temperature events of 28ºF or less for the same period ranges from four to more than 15. Very cold temperatures are still possible during the month of April, with lows below 10ºF in the south to the single digits below zero in the north. 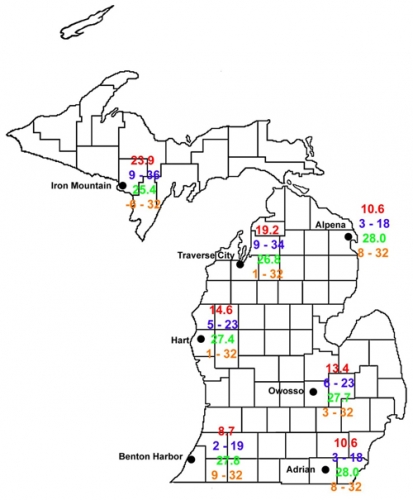 It is also worth noting that there is some minor reduction of frost and freeze risk in years with very warm Marches. When only the top 10 warmest Marches were considered, there is an approximate reduction of 10 to 20 percent in the frequency of subsequent freeze events. This is very likely associated with the persistence of the upper air pattern that led to the abnormally warm March weather into April or longer.

Finally, there may also be some positive impacts of the unusual weather. Warm temperatures will accelerate soil evaporation rates and may allow some early fieldwork opportunities, but this will depend greatly on upcoming rainfall frequency and intensity (the forecasts generally call for wetter than normal weather). Similarly, depending on weather conditions later this year – especially rainfall patterns – there is at least the possibility that seasonal yields of some crops (e.g., forages) could be higher due to a potentially longer than normal growing season.