Red turnip beetles may be a beneficial insect in Christmas tree fields, but may be a pest in vegetable gardens.

Occasionally, we receive calls about a small, red and black striped beetle feeding on weeds in Christmas tree fields and gardens. This beetle is known commonly as the red turnip beetle, Entomoscelis americana (Coleoptera: Chrysolmelidae) They are not a problem on Christmas trees and are typically found feeding on plants (weeds) from the mustard family such as wild mustard, shepherds purse and hoary allysum. In Christmas tree fields, these may even be considered a “beneficial” since their feeding can result in significant damage to these weed species. In gardens, they may be a pest. 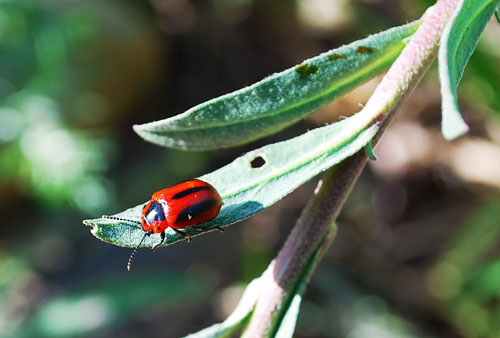 This brightly colored leaf beetle appears to be primarily a northern insect that has been reported as causing injury to vegetable crops in Wisconsin and western Canada. The beetles are bright red with black patches on their head and three black lines running down their backs. They are just over 0.25 inches long. Both adult and larvae feed on many types of crucifers and other vegetable crops. Commonly injured plants include turnips, rutabagas, cabbages, cauliflower, kohlrabi, radishes, horseradishes, mustard, cress, lettuce, beets, beans, sweet clover and potatoes. Evidence of beetle feeding is large, ragged holes in the leaves and circular patterns on the pods and flowers. In Wisconsin, the beetle is reported to be more of a problem on sandy soils. Adult beetles begin to appear in mid-May in Michigan. 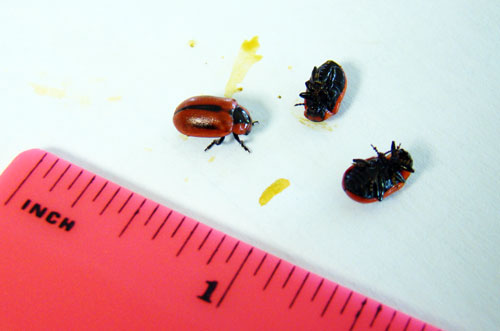 In the late summer, females lay their eggs in masses under clots of earth. The winter is passed as eggs that hatch the following April. The larvae are nocturnal feeders and are not typically encountered. The adults emerge from bright orange pupae in May and begin feeding on mustard and weeds in the crucifer family. After two to three weeks, the beetles dig their way back into the soil where they wait out the hottest part of the summer. They reappear in August to mate and lay eggs. There is only one generation per year. 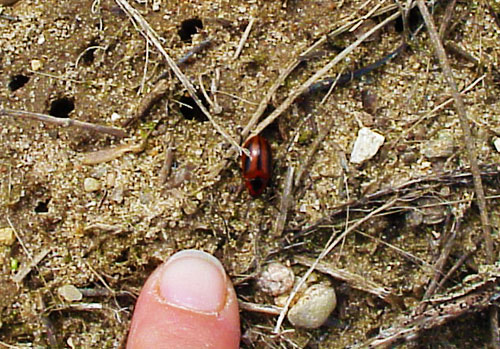 The red turnip beetle is more a novelty or a nuisance than a serious pest in Michigan. Most people who have sent the beetles to the lab have been primarily concerned about the large number of beetles around their homes and in their yards than they are about plant damage. Controlling mustard and other weeds in the crucifer family will help reduce numbers of the red turnip beetle. Sprays containing Sevin or Malathion will prevent feeding damage to susceptible garden plants. Be sure to read and follow all instructions and safety precautions found on the label before using any pesticide.

Frost and freezing temperatures and ways to protect plants

Mutation examples and how they happen