Temperatures were generally near normal with highs from 81 to 91°F and lows from 57 to 69°F. The area received 0.7 to over 1 inch of rain. Most came on July 11 and was associated with a strong line of thunderstorms. The storm front also had strong winds with gusts over 80 miles per hour that did cause damage to vegetable plantings. Corn was blown over with some plants being snapped off. Squash and pumpkin fields also had plants snapped off at the soil line or damaged leaves. Pepper plantings had plants blown over and some blasting of flowers.

Planting for the season is essentially done.

Cucumber, summer squash and zucchini harvest volume continues to increase as more fields come into production. Squash vine borer activity has increased from one last week to 23 per trap this week.

Tomatoes, peppers and eggplants continue to put on growth and set and size fruit. Harvest from tunnel-grown plants is about 10 days away. Staking and tying continues. Bacterial diseases continue to show up.

Collards and mustard greens are being harvested.

Despite some localized thunderstorms and high winds in the region, growing areas received no more than 0.5 inches of rain on Monday, July 11, and most mineral soils are in need of moisture. Weed pressure is high, in younger plantings particularly, and machine and hand cultivation is ongoing. Temperatures in the high 80s and low 90s are pushing degree days and crop development. Herbicide injury symptoms I saw earlier are disappearing, but there is some spotty hail and wind damage. Aphid pressure may be high on susceptible crops.

Sweet corn planting wrapped up this week. European corn borer numbers, being monitored in one sweet corn field, are now close to zero, but there may be enough moths still laying eggs to get into the ears on sweet corn at the young tassel stage and beyond. In 10 days to two weeks we can expect the second generation to begin to fly and lay eggs.

Be aware that peppers are beginning to set fruit and these fruit need to be protected from European corn borers, as do snap beans. Japanese beetles are beginning to emerge and frustrate home gardeners, but they can be a headache in a number of vegetable crops as well.

Melons are nearing full size in some fields and watermelons are setting fruit. Summer squash harvest is underway. With downy mildew identified in this region and powdery mildew reported from a home garden, protective materials need to be considered on cucumbers, at least. Honeybee activity looks light to me but they seem to be getting the job done.

Tomatoes are filling out and beginning to set a heavy fruit load which always seems to signal more susceptibility to foliar disease on the lower leaves. Environmental conditions have not favored foliar fungal disease, but I did notice some bacterial speck on foliage in one area of one field.

Cole crop growers continue to watch for the damage from imported cabbage worm and diamond back moth. Research tells us that crops at various stages can tolerate more or less pressure from these pests and over-spraying can lead to less control, rather than more. 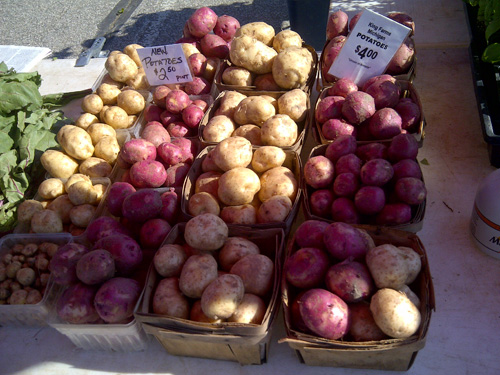 The weather has been very summer-like in west Michigan this past week. Daytime highs were mostly well into the 80s, with lows usually in the mid- to upper 50s. On Monday, July 11, a storm with wind gusts up to 80 miles per hour caused sporadic crop injury, along with downed trees and structural damage. Rainfall varied from only a few tenths to more than 2 inches. Seasonal heat accumulation from an area extending from southern Newaygo County to southern Van Buren County finally exceeds that of the exceptionally cool, 2009 season by 5 to 10 percent.

Celery development is about two weeks behind normal. Harvest is underway for some and soon to begin for others. Transplanting will end very soon. The crop condition is good overall with light to moderate insect and disease pressure. Aster leafhopper pressure was light overall, with a few fields having greater infestations. The one aster yellows infectivity test result from leafhoppers in celery was negative. Aphids and tarnished plant bug populations are beginning to rise in some locations. Celery anthracnose is present at modest levels in many fields, including all popularly grown varieties.

Onions appear to be growing well. Again, overall disease and insect pressures are low. Harvest and establishment of radish and lettuce fields continues.

The vine crops, as well as potatoes, tomatoes, eggplants and peppers that I have seen look good overall, except for the delayed maturity. Phytophthora has appeared in the wetter areas of fields having a history of the disease. Reports from growers harvesting zucchini have been positive.

Rain showers on Monday (July 11) yielded only 0.1 to 0.6 inches of rainfall across the central region, with most of the area receiving between 0.1 and 0.2 inches. Soil conditions are dry with irrigation systems running. High temperatures have been in the 80s and low 90s

Pickling cucumber growth stage ranges from just planted to setting and developing fruit. Like many other crops in central Michigan, heavy spring rains affected some fields more than others due to timing and intensity. Fields are variable with some having poor stands, drowned-out areas and a wide range of plant development within the field, while others have excellent stands and uniform growth.

Downy mildew was reported in Bay County and is suspected but not confirmed in at least one other county in central Michigan. Growers are advised to follow MSU pathologist Mary Hausbeck’s fungicide recommendations and begin fungicide applications. Read her article, Downy mildew outbreaks in southeast Michigan on cucumbers, for more information.

Dry bean growth ranges from unifoliate to bloom. Root rot due to slow emergence is a concern in many fields. Western bean cutworm traps are catching two to eight moths per week, similar to last week.

Temperatures have continued warm over the last week. Our area received widespread rain Monday morning, July 11, with large hail reported in a few places especially west of Shelby. Rain amounts varied from 0.75 inches up to over 2 inches. Most of that rain fell in less than an hour, causing widespread erosion in many places. However, with the University of Wisconsin reporting evapotranspiration rates of over 0.25 inches per day, we really needed the rain.

Asparagus fern in full-season, harvested fields is still in the developmental stage. Where Tom-Cast sensors are set, they are racking up some pretty impressive numbers. Purple spot and rust are both active in fields on the disease side and common asparagus beetles are also working in fields already in full fern. Weed control applied after harvest looks good, except for a few places where glyphosate-resistant weeds such as marestail are popping up. However I am seeing more herbicide damage to new asparagus fern than I would like.

Vine crops continue to flourish, male blossoms are a little sparse so far, which has led to abortion of the first fruit sets, but harvest has begun on the earliest planted zucchini fields. I do have a couple of plants to send to the lab today (July 13) that are suspected virus plants, but it is by no means certain that they have a virus, and to date, soybean aphids have been pretty scarce. We do have the first powdery mildew lesions showing up a month earlier than normal.

In carrots, last week’s aster leafhopper index in Oceana County dropped back the infectivity rate substantially and we are back up to a threshold of more than 30 per 100 sweeps. The sample I took in Newaygo County had no infectivity at all and so the threshold there is at more than 40 per 100 sweeps. Foliar diseases, either Cercospora or Alternaria can be found in most fields and Tom-Cast numbers are at the point of triggering another fungicide spray.

I caught one European corn borer moth in my traps and caught three corn earworms. I have yet to catch any western bean cutworm adults in my sweet corn trap, and I caught only three in another trap I have in field corn.

A tale of two cutworms: Cutworm control in asparagus

Farmers and homeowners should be prepared for spring flooding