Temperatures were above normal with highs from 81 to 92°F and lows from 61 to 75°F. The area received 0.1 to over 3 inches of rain. Rain came as scattered thunderstorms, so some areas are still dry and irrigation is being applied.

Cucumber, summer squash and zucchini harvest volume continues to increase as more fields come into production. Squash vine borers are still active, but numbers have decreased from 23 per trap last week to eight per trap this week and damage should be noticeable soon.

Tomatoes and cantaloupes grown in tunnels are being harvested. Tomato hornworm larvae can be found.

Peppers and eggplants continue to put on growth and set and size fruit. Harvest will be in about 14 days. Bacterial diseases continue to show up.

Potatoes are being dug for local, direct market sales.

Sweltering heat and high relative humidity has prevailed for the past four days (although it seems longer) and growers are very busy maintaining irrigation systems and schedules. Newer transplants such as cole crops are most at risk and likely to show drought-stress. A series of localized thunderstorms moved across the region on Monday afternoon (July 18), and while some of these were accompanied by high winds, others were brief downpours bringing anywhere from 0.1 to 0.7 inches, more or less. Some areas received none. Despite dry conditions and uncomfortable weather for us, vegetable crops are making good progress, particularly under drip irrigation systems.

The heat has eliminated degree day deficits for the most part. One can see early fields of sweet corn with silks beginning to dry. European corn borer numbers may be on the rise and into the second generation as trap numbers are up from last week. This is disappointing for crops such as peppers and snap beans, however corn earworm trap catches remain at zero.

Downy mildew has been confirmed on cucumbers from southern St. Clair County, so it is highly probable that it can be found in surrounding counties. Cucumber harvest is well underway. Quality on dry ground is suffering from dry soils and possibly poor flower fertilization (crooked fruit). Watermelons and cantaloupes are beginning to take on mature color.

On other vine crops such as pumpkins and winter squash,vine borer is still active and laying eggs and will be for another two weeks or so. Summer squash is highly susceptible to this pest as well. Tuber development on potatoes is rapid and outgrowing the quart baskets used for new potatoes for retail.

Japanese beetles, which cause injury to many fruit and vegetable crops, are increasing in number, depending upon where you are. Bell peppers are setting fruit along with earlier specialty types. Snap beans and cabbage are on the wholesale market.

Rainfall was modest, with most of the dozen Enviro-weather stations in my area indicating a few tenths to a half-inch of rain. The exception was southern Van Buren County, which received about an inch in the last few days. Temperatures have soared into the 90s. Cumulative base-50 degree days are now approaching the recent five-year average. Growers are being or will soon be challenged to keep up with irrigation needs. The current heat and humidity is also likely to increase pressure from a number of diseases and insects.

Celery transplanting is complete and harvest continues. Variegated cutworm and aphid populations are increasing. Aster leafhopper counts vary from modest to significant, but samples sent to our lab are negative for aster yellows infectivity. However, leafhoppers from local herb fields have been positive. Celery anthracnose is found at modest levels in many fields. Last week (July 10-16), I visited a farm where seedlings growing outside in flats exhibited anthracnose symptoms (see Photo 1). The diagnosis has been confirmed by MSU Extension specialist Mary Hausbeck's lab. 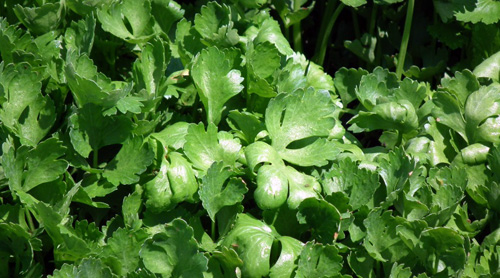 Scouting reports indicate pest pressures in onions to be modest overall. Thrips numbers have been low up until now. Botrytis is fairly common and bacteria soft rot is occasionally found.

Cabbage transplanting should be complete by next week. Harvest reports are positive. Vine crops look good overall, with positive reports of the current zucchiniharvest. Harvest of some spaghetti squash acreage should begin soon. The tomato and pepper fields that I have seen appear to be healthy and growing well.

Sweet corn has been developing rapidly. Harvest will begin next week for some. Pest pressures are low. All three pheromone traps in southern Kent County show no European corn borer moths. Only one corn earworm moth was found.

It’s hot. High temperatures in the mid-90s yesterday (July 19) and mid- to upper 80s last week, with lows in 60s. Rain showers over the past week have left between 0.1 and 0.9 inches, with most areas receiving 0.5 inches. Evapotranspiration rates are high and irrigation systems are running.

Western bean cutworm activity is ramping up this week. Pheromone traps in Montcalm caught between 26 and 142 moths. One trap in northeast Kent County caught nearly 200 this week. In field corn, egg masses are easily found in several locations in central Michigan, indicating that female moths are depositing eggs. Growers of sweet corn should take note and scout for egg masses, especially if a regular insecticide schedule is not being used for other pests such as corn earworm or European corn borer. Western bean cutworm egg masses are typically deposited on the upper leaves of corn plants and normally hatch in five to seven days; we are seeing egg masses hatch in as little as four days this year. This pest is also of concern to growers of common beans such as dry beans. See DiFonzo, Springborn and Chludzinski’s article, Western bean cutworm special alert, for more information. 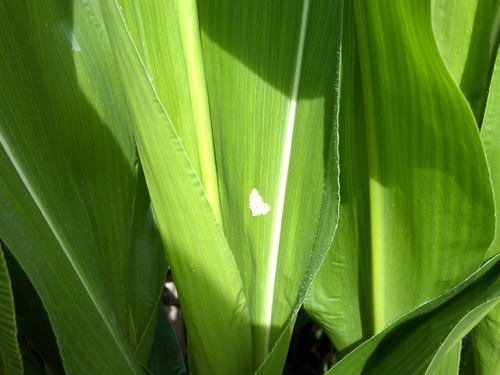 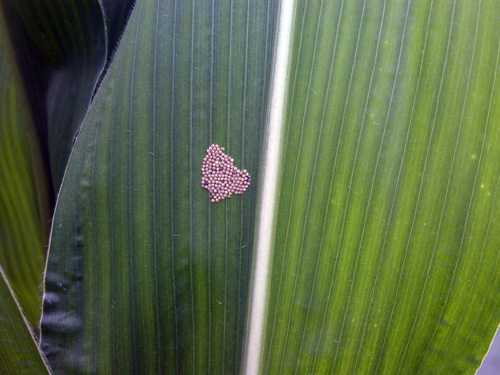 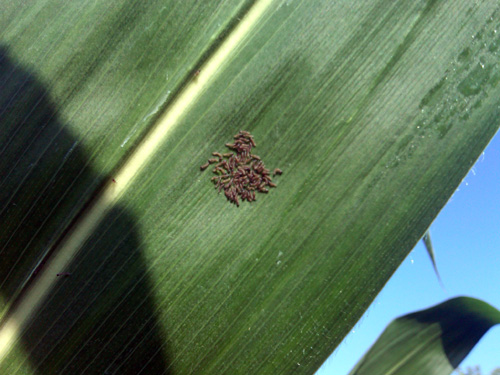 Two separate road accidents involving farm equipment this weekend in Montcalm are a reminder to all to be cautious when approaching farm equipment on roadways, and for growers to check and be sure all equipment that is transported on public roads has a visible SMV emblem and appropriate warning lights.

Temperatures were well above normal this last week. Rains have been spotty, with Tuesday’s (July 19) rain ranging from about 0.2 inches up to a high of 0.6 inches. With evapotranspiration rates as high as they have been, people have continued with irrigation right through these showers.

Asparagus ferns in full-season harvested fields have developed very rapidly in the last week. Asparagus growers are now struggling to get a first fungicide cover on these fields. Our Tom-Cast sensors have racked up some pretty impressive totals in the last week and I am afraid that some farmers were a little on the late side in making those applications. Japanese beetles have emerged here and while I see large numbers in some asparagus fields, I haven’t noticed any feeding.

Vine crops continue to grow rapidly and processing zucchiniharvest is now in full swing. Unfortunately, the plants I sent down to MSU Diagnostic Services last week were confirmed as having watermelon mosaic virus. Historically, this has been the least damaging of the viruses we get here, but since it is early, we will be living with it longer than in a normal year. Angular leaf spot is also running wild in many winter squash fields, but I don’t think there is much that can be done about it other than the copper sprays we are already using.

In carrots, last week’s aster leafhopper index in Oceana County was a lot more infected (7.2 percent) than the week before. That level of infection moves our threshold to five to nine per 100 sweeps. Alternaria and Cercospora blights are also active in carrot fields and, because of irrigation, the Tom-Cast numbers in that crop are even higher than in asparagus.

I caught one European corn borer moth in my traps, but for the first time in a few weeks, caught no corn earworms. I did catch two western bean cutworms in my sweet corn trap, but had 25 in my field corn trap.