To use the Resistance Management Insecticide Compatibility chart, find the cell that intersects the row and column from two compounds of interest.

" thus is NOT a good rotation partner, because of a history of known cross-resistance between these two classes of insecticides.)

The following codes are relevant for lepidoperan pests of fruit crops, including codling moth, Oriental fruit moth, and obliquebanded leafroller: 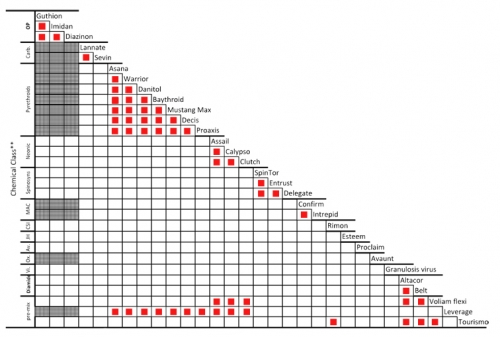 * - Recommendations are based on current published resistance studies from Michigan pest populations.
** Insecticides within a given chemical class have the same or similar mode-of-action (MOA).

Key to names of insecticide classes and associated MOA: