Blueberries have a distinct growth habit. Each spring new shoots emerge from the crown at the base of the plant. These shoots grow quickly the first couple years when they are young. They then start to bear fruit. In the fall, flower buds for next year form at the tips of this year’s growth. Last year’s shoots fruit at the tips and branch below. Every year the new shoots fruit and branch again. In a few years, you have an old, gray cane with many short branches. These small shoots have one or two flower buds and a few leaf buds on each shoot. The fruit and leaves on these older, less vigorous canes are smaller and the cane gets weaker and weaker each year. These older canes produce a lot of flowers at the ends of all the small branches, but do not produce a lot of new growth. Eventually the cane dies.

The trick for blueberry growers is to know when to remove these older canes. I feel that blueberry stems are most productive when they are three to six years old and should be removed in the seventh or eighth year if not before. A good balance for a blueberry bush is to have 20 percent of the canes as one- to two-year-old shoots, 60 percent as three- to six-year-old canes and 20 percent as canes older than six years old slated for removal. 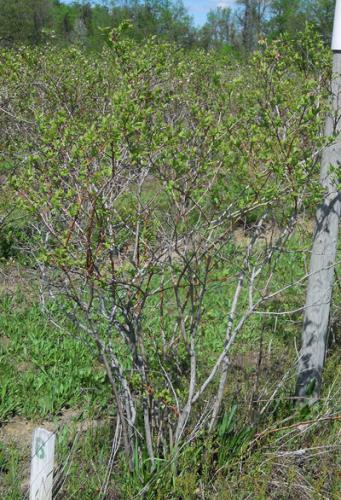 This 30-year old Bluecrop bush shows many older, weaker canes and no new growth from the crown. Bushes like this are an excellent candidate for renovation.

A lot of growers are reluctant to prune and remove fruiting canes that will fruit next year. Over time the bush has more older canes and fewer newer shoots. The older canes often die during the winter, and experienced growers will say, “We should have pruned harder,” and new growers will ask, “Why did all those canes die?” What is needed is a drastic removal of old canes to force the bush to grow new shoots and replace the old, weak, aging canes. I also often speak to people who have bought or inherited an old blueberry farm or planting. They have the same question, “How can I revitalize the blueberries?”

The labor involved in pruning out most of the canes on a large planting of blueberries is daunting and everyone asks, “Isn’t there a cheaper, quicker way?” Yes, there is. Cut off all the canes and grow a whole new crop of canes. Many people then ask, “Won’t that kill the plant?” No, blueberries are bushes, not trees. Their natural habit is to grow new shoots from the crown every year. If you cut off the top, the crown will send up new shoots as it is programmed to do so. Increasing fertilizers will result in some more growth and perhaps some new shoots from the crown, but the older canes remain and they are not going to be revived by more fertilizer. 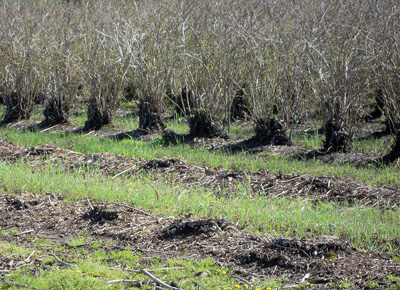 Blueberry crowns soon after they were ground down to a height of several inches. 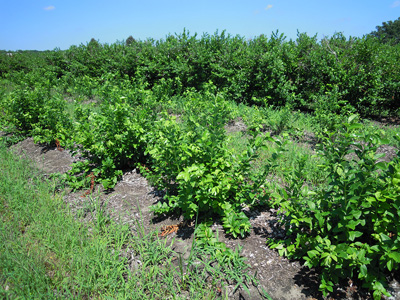 Blueberry shoot growth from the crowns in early spring. 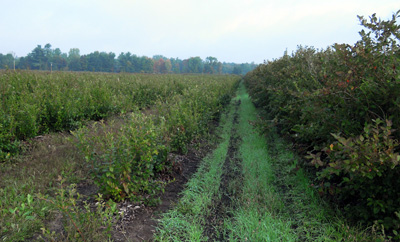 Renovation should be done as early in the spring as possible. Don’t wait for growth to start in the spring. The later you do the cutting, the less time is availble for the plant to change gears and get a good start on annual growth. You are not finished after removing the bush canopy because they will produce many more new canes during the next year or two than are needed. Several years of increased pruning is needed to the abundant new shoots. Generally, I recommend growers remove two-thirds of the new shoots the first year and then about half the new shoots the second.

An alternative to cutting the whole bush down is to remove one-third or half the canes one year and then the rest over the next year or two. This approach may allow for some fruit harvest during the process, but often the canes that are left are weak and not very productive. This approach requires more pruning time than cutting all canes at once.

Unfortunately, renovation is not a cure all for old blueberry fields. Renovation can work well if a healthy planting has been neglected. It can be especially useful if newer plantings are out of balance with many older canes and few new shoots. It is not a panacea for older plantings. Renovation is likely to expose hidden problems in the field.

After renovating older fields, growers may discover virus diseases they did not know were in the field. This is because grinding the crowns can spread isolated viruses throughout the planting. The vigorous new growth of infected plants will often show virus leaf symptoms in the first season after the stumps are ground off. Plants that were infected during renovation will not show symptoms immediately. Generally, it takes several years for virus symptoms to appear after infection. Since many older plantings already have viruses in the plantings, Michigan State University Extension does not recommended renovation for these plantings. The only treatment for virus-infected plants is to remove and destroy the plant. If viruses are suspected in the field, infected plants should be identified and removed before renovation.

Renovation is only a short-term stimulus for some fields. These older, problematic fields on good sites are probably the best candidates for replanting. 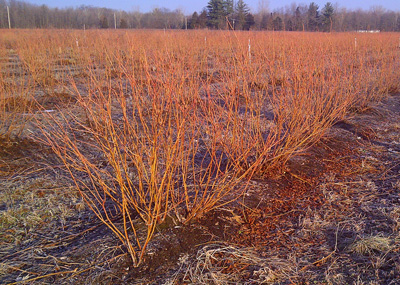 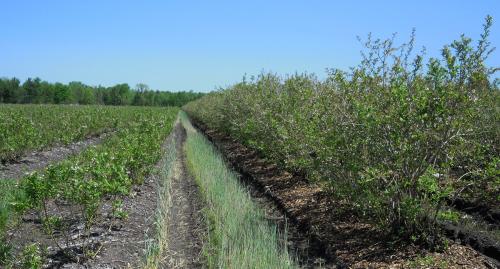 Spring growth the following season. Note that most of the canes that grew the previous season have been removed and more new shoots are growing from the crown. 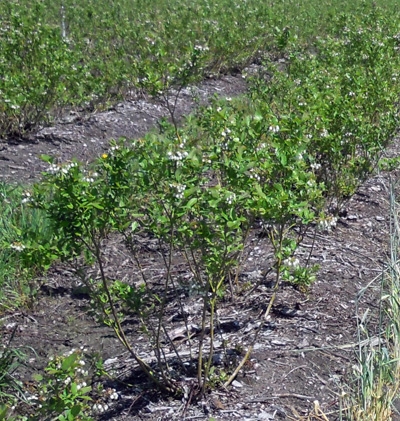 Close-up of renovated plants. Note that plants were cut back to a half-dozen shoots. Last year’s shoots are blooming and putting out new shoots.

Soil test before you plant blueberries

Phytotoxicity: When an application appears to do more harm than good