Rose chafers have been seen throughout the chestnut producing regions of Michigan. Growers should consider that mature trees can sustain a substantial amount of feeding before any negative impacts are realized and be conservative with chemical treatments.

Rose chafers are considered a generalist pest and affect many crops, particularly those found on or near sandy soils or grassy areas conducive to grub development. The adult beetles feed heavily on foliage and blossom parts of numerous horticultural crops in Michigan and can cause significant damage to chestnut orchards. Rose chafers can be particularly damaging on young trees with limited leaf area. Like Japanese beetles, rose chafers skeletonize the chestnut giving them a fine, lace-like appearance. Unlike potato leafhopper, that cause a phytotoxic affect due to feeding, rose chafers cause simple mechanical damage. Growers should consider that chestnut trees can sustain a significant amount leaf feeding from rose chafers with no negative implications to the tree or crop; this is particularly true for larger established trees. However, growers should be aware of potential flower damage as that could have potentially substantial implications on yield.

The rose chafer is a light tan beetle with a darker brown head and long legs, and is about 12 millimeters long. There is one generation per year. Adults emerge from the ground during late May or June and live for three to four weeks. Females lay groups of eggs just below the surface in grassy areas of sandy, well-drained soils. The larvae, or grubs, spend the winter underground, move up in the soil to feed on grass roots and then pupate in the spring. A few weeks later, they emerge from the soil and disperse by flight. Male beetles are attracted to females and congregate on plants to mate and feed. 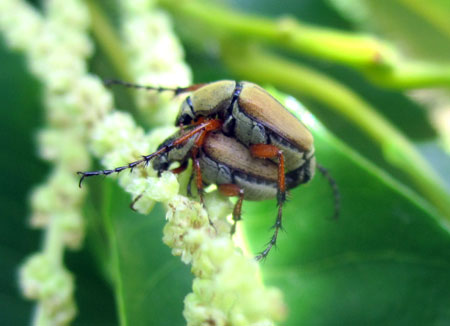 Managing rose chafer can be a frustrating endeavor, as they can reinfest from surrounding areas quickly. This reinfestsation is often misinterpreted as an insecticide failure, but efficacy trials have shown that a number of insecticides remain effective treatment options. Carbamate, organophosphate, pyrethroid and neonicotinoid insecticides all have good activity against rose chafer and can provide some control. Organic options including azadirachtin products and surround are marginally effective. Growers choosing to use kaolin clay should remember that good coverage is key and those considering pyrethroids or neonicotinoids should be aware that these products may potentially increase pest mite populations. For a complete list of pesticides in these classes currently registered, refer to the Michigan State University Extension resource “Pesticides Registered for Edible Chestnuts in Michigan, 2014.”