These damaging beetles are being reported around the state.

Rose chafer beetles have been spotted in the last few weeks, so vineyards should be scouted for these beetles to make sure they aren’t feeding on leaves and clusters. Populations of the rose chafer beetle, Macrodactylus subspinosus, have been abundant in some vineyards across the state of Michigan and beyond during the past few years. With this history, it is a good time to review the biology and life-cycle of this pest and to review the available options for control.

The rose chafer is a light tan beetle with a darker brown head and long and spiny legs. It is about 0.5 inch long. The adult beetles have only one generation per season, with emergence from the soil starting in late May and June, and the beetles live for up to a month. While grape is a preferred host there are also many other plants it will feed on including rose, strawberry, peach, cherry, apple, raspberry, blackberry, clover, hollyhock, corn, bean, beet, pepper, cabbage, peony and many more plants, trees and shrubs.

This vineyard pest is distributed throughout the eastern U.S., with greatest abundance in areas with sandy soils and grass. This is because the female beetle, once mated, selects grassy and sandy areas for laying her eggs. Those eggs hatch into larvae that feed on grass roots through the summer, moving down away from the frost line during the winter. In spring they feed again, pupate and then emerge in late May and June. Emergence of adult beetles typically coincides with bloom of grapevines. The beetle's ability to skeletonize leaves until only the midribs are left and consume the young tender clusters makes it an economically-significant pest of grape production. 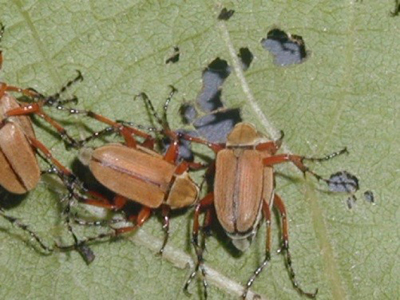 Rose chafers feeding on a leaf.

The rapid arrival of rose chafer beetles and the potential for high populations in hotspots underscores the need for regular vineyard monitoring. Michigan State University Extension recommends to scout areas that have had this pest in the past so growers can protect clusters when the beetles start emerging rather than waiting until severe damage has occurred.

Establish a route for checking vines and travel this route looking for the beetles on vines, ideally twice a week. The beetles are easy to see and direct counts on vines are possible. There is also a trap developed and marketed for rose chafer monitoring or trapping-out but MSU Extension does not recommend using this except as a single trap for monitoring in a location away from vineyards, as the trap can draw beetles to the vineyard.

There is no formal economic threshold developed for this pest, but The Ohio State University recommends an average of two rose chafers per vine as a working action threshold for initiating a control program. Below this there is likely to be only a small amount of damage that doesn’t warrant the expense of a spray.

However, as mentioned above, the population of this pest can rise rapidly and I have observed over 200 rose chafers per vine in one winegrape location in northwest Michigan. This is clearly going to cause damage to that vine. Rose chafers can also be very locally distributed, especially along the edge of vineyards adjacent to a grassy area. This highlights the need to sample different areas of a vineyard to know the pest distribution. If there are hotspots, a targeted spray may be sufficient to control the beetles without needing a blanket application across the whole vineyard. 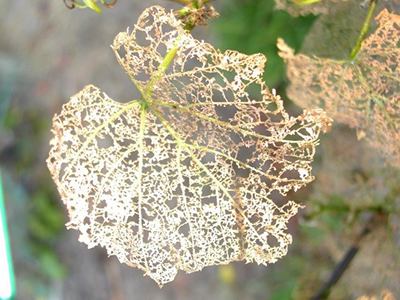 Rose chafer beetles are attracted to sandy and grassy areas during their egglaying period. It may not be feasible, but if areas that are obvious sources of the beetle can be changed into a non-grass cover crop or can be fallow for the period of late May until early June, this might force the beetles to seek egglaying sites elsewhere. Small numbers of beetles can also be hand removed and placed into soapy water, if you have a small enough vineyard that this manual control is possible.

For chemical control, there are a number of options to consider. Assail, Sevin and Danitol are all ranked as providing excellent control of this pest. These have some different properties, with the neonicotinoid insecticide Assail providing protection due to it knocking down the beetles and also because it is a systemic insecticide that is taken into the vine making is resistant to washoff and providing good residual activity. In a 2003 MSU research trial in Leelanau County, we found that Assail provided longer control than Sevin.

The carbamate insecticide Sevin and the pyrethroid insecticide Danitol both have contact activity against rose chafer, providing knockdown of the beetles on contact, and with Sevin also having some activity as a stomach poison after being eaten by the beetles. Additional broad spectrum insecticides such as the pyrethroids Baythroid and Mustang Max are expected also to have good activity, as is the organophosphate Imidan. Under the high temperatures we have been having recently, the residual control of pyrethroids is expected to be shorter than under cool conditions. However, we also expect there to be a shorter period of rose chafer activity during hot conditions, allowing for a reduced period for vine protection against this pest.

The timing of rose chafer activity also can overlap with early season grape berry moth activity and also early potato leafhopper infestation. The insecticides mentioned above will also provide some control of these other insect pests at the same time.

There is also a biopesticide product, BeetleGONE,that is active on scarab beetles such as Japanese beetle. This is certified for use in organic production and is based on a Bacillus thuringensis strain that is active against beetles. MSU will be conducting some trials this summer to evaluate its activity against rose chafer so that can hopefully be added to the label.