Samples needed of Goss’s wilt of corn, a new disease for Michigan

Samples of Goss’s wilt of corn can be tested for free through a grant from the Corn Marketing Program of Michigan.

Goss’s wilt is an emerging disease across the Corn Belt. For a long time the disease was restricted to western states of the Corn Belt. However, more recently the disease has been confirmed in Wisconsin, Illinois, Indiana, Canada and even Louisiana. Over the last couple of years, Goss’s wilt has been found in seed corn production fields in Michigan.

Goss’s wilt is a bacterial disease of corn caused by Clavibacter michiganensis subsp. nebraskensis (Cmn). As Goss’s wilt is caused by a bacterium, fungicides will have no efficacy against this disease. Symptoms of Goss’s wilt include a leaf blight phase which can look similar to other foliar diseases. However, Goss’s wilt can be distinguished by water-soaked lesions with freckles around the margin of the lesion. A shiny exudate is also formed on the surface of the infected leaf.

Management of Goss’s wilt relies on accurate identification, which can be difficult. The Corn Marketing Program of Michigan is supporting a study to examine why this disease is becoming more prevalent, and we need your help in the collection of samples. Samples or images of possible Goss’s wilt can be sent to Martin Chilvers, 578 Wilson Rd, CIPS104, East Lansing, MI 48824, or contact me at 517-353-9967, chilvers@msu.edu or @MartinChilvers1 (Twitter). 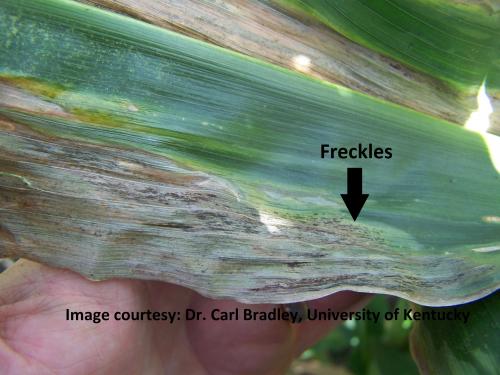 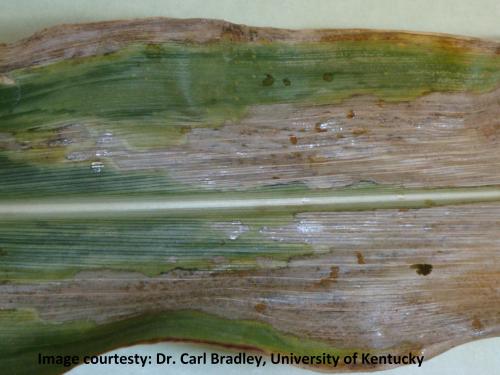 If you do have Goss wilt, management consists of rotating fields away from corn to help reduce the inoculum load and controlling grass weeds which can harbor the pathogen. No corn hybrid is completely resistant to Goss’s wilt, but hybrids do differ in their susceptibility, so select hybrids with a high level of partial resistance. As the Goss’s wilt pathogen survives on corn residue, cultivation can help by encouraging breakdown of corn debris.