Look for sweet cherries showing sporulation due to American brown rot infection. These fruit will be sources of disease inoculum that can result in excessive infected fruit at harvest. 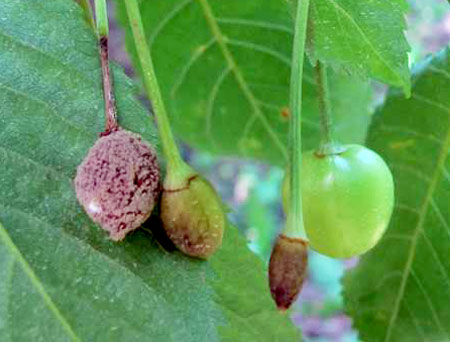 These sporulating fruit were present at very low numbers in the affected orchards; for example, one fruit per 25 trees. However, our experience with American brown rot infection in 2011 indicates that this current level of inoculum is significant and can result in heavy fruit infection at harvest. This fungus can move quickly under warm and wet conditions, so an early infection now can set the stage for a real challenge to control this disease as fruit sugars increase near harvest.

Sweet cherry fruit are typically initially infected by the American brown rot fungus as they begin to ripen and their sugar content increases. This infection window usually opens about three weeks prior to harvest. The optimal temperature for infection is between 67 and 77 degrees Fahrenheit, and spore production is greatest between 59 and 74 F. Although fruit injury may lead to increased infection or entry sites for the American brown rot fungus, this disease can cause infections on ripening fruit when no wounds are present. Other factors influencing increased infection are fruit-to-fruit or fruit-to-branch contact on trees.

It is critical to scout now for the presence of green sweet cherry fruit showing sporulation due to American brown rot. We would expect these fruit to be present at very low levels at this time. If growers are scouting and observe fruit infected with American brown rot, it is likely that there are other fruit that are infected, but not showing symptoms yet. Even if growers find these sporulating fruits in small numbers, the likelihood of more infected fruits are located high up in the tree and cannot be seen from the ground or truck window.

An American brown rot spray program should be initiated about one month prior to the expected harvest date, and we suggest that the fungicide combination Gem 500SC (3.8 fluid ounces per acre) and Captan 80WDG (1.75 to 2 pounds per acre) should be applied. Gem has been shown to have anti-sporulation properties against the American brown rot fungus in studies conducted on peaches (about a 70 percent reduction in spore production from an infection source) conducted by Norm Lalancette in New Jersey. This fungicide combination will have the anti-sporulation effect and also protect un-colonized fruit from infection. The Gem + Captan spray will also provide effective control of cherry leaf spot and powdery mildew. This combination is a good choice for the next applications, and Indar should be saved for sprays made closer to harvest.

This Gem + Captan application should be followed by an aggressive Indar + Captan program involving multiple applications closer to harvest. With the Section 24(c) label for Indar use, the amount of Indar applied for brown rot fruit protection should be 9 to 10 fluid ounces per acre. If we are experiencing weather with temperatures in the 67 and 77 F range, Indar + Captan sprays should be applied prior to rain events.

As we approach harvest, growers should take the time to scout their orchards for American brown rot. If the orchard has this disease present, it will not be difficult to locate fruit with the typical gray-brown fungus growing on the cherry. Blocks with bacterial canker, hail damage or problematic orchards should be the first stop for scouting. If American brown rot is detected, growers should move to an every row spray regime for fungicide applications, particularly if the trees are large. Growers should also slow down the tractor speed to obtain adequate coverage. Efforts should be made to apply fungicide applications with ample water to ensure that the entire tree is properly covered.

Controlling obliquebanded leafrollers is also of utmost importance as we approach harvest. These larvae web cherry clusters together and prevent fungicide penetration inside the cluster. If growers know they have had an obliquebanded leafroller problem in the past and did not control them at the overwintering generation timing, they will decidedly need to apply an insecticide for the summer generation as these insects could ultimately impact American brown rot control at or near harvest.