This demonstration is a continuation of the 2015 project initiated with local farmer input to compare the results of moderate annual lime application (1 ton per acre, surface applied) and various annual fertilizer rates including no fertilizer, fertilizer at “nutrient removal” rate and fertilizer at “build-up” rate based on a Michigan State University soil test. MSU Extension conducted the demonstration in cooperation with host farmers Bruce and Wayne Berkompas from Rudyard, Michigan.

Six strips were established in 2015 on a typical timothy/birdsfoot trefoil hay field on clay soil under a single cut harvest system. In 2016, these strips were each divided into two treatment sections. One section of each strip did not receive any additional lime or fertilizer in 2016. The other section of each strip was soil tested and given a lime and fertilizer treatment as in 2015, with the exception that the build-up fertilizer rate was calculated based on the new, 2016 MSU soil test report for each strip. The yield goal was set at 2 tons per acre, as it was in 2015. These treatments were intended to duplicate the approach used in 2015 on a part of each area, and leave part of each area treated in 2015 as an untreated area in 2016 to observe any carry-over effect from the 2015 fertilizer and lime treatments. 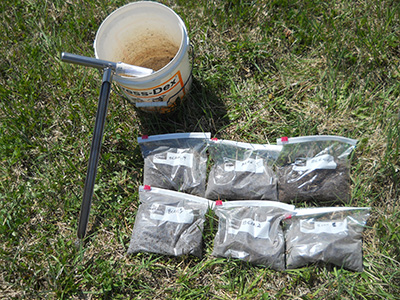 There were two main differences between the 2015 and 2016 lime and fertilizer applications. 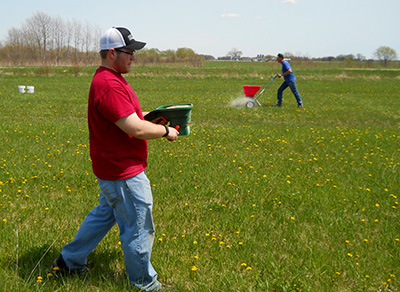 Using a ballpark figure for fertilizer cost of $540 per ton, a simple economic estimate can be made to compare yield increase based on fertilizer application over 2016 only, and over 2015-2016. Fertilizer spreading cost of $7.50 per acre is included. Because the treatments were not replicated, the economic estimate should be considered as a “snapshot” for this year and location only. Yield check data will be collected from these plots in 2018 without further applications of lime and fertilizer to demonstrate the carryover impact of single-year and two-year fertilizer and lime application. Build-up rates are expected to reach the critical level in three to four years, so they are not expected to break even in the first two years.

This demonstration suggests fertilizing at crop removal or build-up rate every other year may provide a more economic approach to increasing hay yields than annual application in this type of system and environment. Including 50 pounds nitrogen per acre when fertilizing may improve yields substantially at a relatively low cost.

To read more about the 2015 project, see “Hay fertilizer and lime demonstration in Chippewa County.”