Sensitivity of American brown rot to sterol inhibitor fungicides in 2008

During the 2008 growing season many factors contributed to the high level of brown rot observed in sweet cherry orchards around the state. Pollination problems, unusually long retention of unfertilized cherries, and wind and hail damage combined with ideal conditions for disease development leading up to harvest creating epidemic levels of brown rot infection in many sweet cherry blocks around the state. Due to the high levels of brown rot, the efficacy of sterol inhibitor fungicides, such as Indar, Orbit and Elite, was called into question. Field trials testing Elite and Indar were conducted at the Northwest Michigan Horticultural Research Station in Traverse City, Michigan during 2008. Disease pressure was extraordinarily high because we inoculated trees with the brown rot pathogen. Despite this high pressure, Indar adequately suppressed brown rot (Table 1). Elite was not as effective as in previous trials and will be tested again in 2009 to confirm these observations. 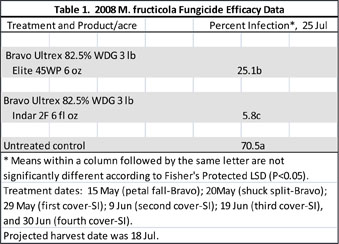 None of the orchards screened confirm resistance to propiconazole (Orbit) but many orchards, particularly sweet cherry orchards are approaching 50 percent relative growth, characteristic of resistant M. fructicola isolates in peaches (Figure A). Currently, this screening process cannot confirm or reject the presence of fenbuconazole (Indar) resistance as practical field resistance has not been conclusively proven (Figure B). Indar sensitivity levels can be used to gauge changes in sensitivity over time and to compare the average sensitivity of orchards based on the history of sterol inhibitor use.

Monilinia fructicola sterol inhibitor-sensitivity based on history of use in abandoned, organic and conventional orchards.

What methods can be used to limit further shifting in the brown rot populations that will lead to resistance to sterol inhibitors? Tank mixing and fungicide rotation are a must to preserve SI efficacy for as long as possible. Full rates and good coverage are also very important. Iprodione (Rovral® 50WP) may be applied for the spring, blossom-blight application to help limit the number of sterol inhibitor sprays used in a season. Iprodione is a protectant fungicide that affects the fungus differently than sterol inhibitors and may help reduce the speed at which sterol inhibitor resistance is developing. Pyraclostrobin and boscalid mixtures (Pristine®) and trifloxistrobin (Gem) are also rated as providing good control of American brown rot under lower disease pressure and can be utilized as a rotational partner during some seasons. We are also awaiting word on a special Section 24(c) label for Indar which will increase the allowable rate used in orchards from 6 fl oz per acre to 6-12 fl oz per acre. Since differences in sterol inhibitor sensitivities are quantitative in the brown rot population, increasing the rate of Indar should be effective in controlling strains with shifted phenotypes.

The most important factor in limiting further shifting in brown rot populations is to effectively kill the fungus in orchards and limit exposure to sterol inhibitors. This can be best accomplished as stated above by rotating modes of action (especially to Iprodione during bloom). In addition, increasing the rate of Indar initially to at least 8 fl oz per acre would increase the effectiveness of the best tool for killing American brown rot fungi. We will pass word along of the Section 24(c) label when it becomes available.

The relationship between plant disease management and pollinator conservation