Observant walkers may have noticed silver spotted skipper caterpillars on soybeans. Although more of a curiosity, they do feed on foliage.

There seems to be more than average of silver spotted skippers this year in soybeans. Silver spotted skippers fold leaves over and tie them into a shelter for feeding. The caterpillar is very distinctive – it is smooth-skinned with bands of green and yellow with a red, constricted prothorax (“neck”) and a big, orb-like, brown head. Larger skippers (0.5 inches or more) have two large, orange eye-spots on the head. They can grow to 1.5 inches or more. Silver spotted skippers are, for the most part, a curiosity, although they do feed on foliage. The damage should simply be counted in the general defoliation threshold in the field: 50 percent seedling stage or 25 percent at pod set/fill.

The “little guys” – 1/8 inch. At this stage, the silver spotted skipper will cut two segments on the leaf edge, fold it over, and stitch together with silk. They abandon smaller shelters as they grow (may see two to three on a leaf). Their body is alternating with green and yellow stripes. They have a constricted red “neck,” (orange arrow) and a dark brown, orb-like head (black arrow). 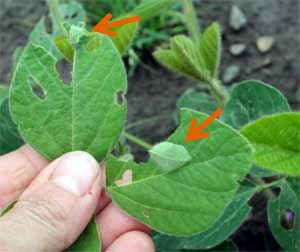 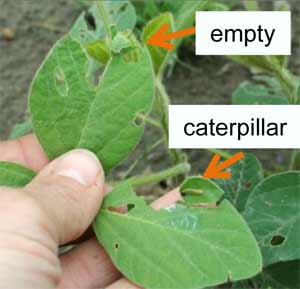 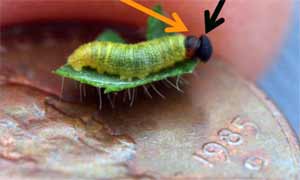 The “teenager” – 1/2 inch. At this stage, the silver spotted skipper will roll the leaf edge over and stitch together with silk. They have a constricted red “neck” that is now more apparent, and their dark brown, orb-like head now has orange eye spots. 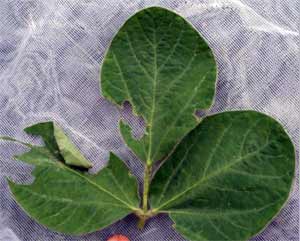 The “big dudes” – 1 to 1.5 inches. At this stage, the silver spotted skipper will stitch multiple leaves together as a shelter. They have a constricted, red neck, a big head with orange spots, and yellow prolegs. The middle of their body is thicker than the ends. 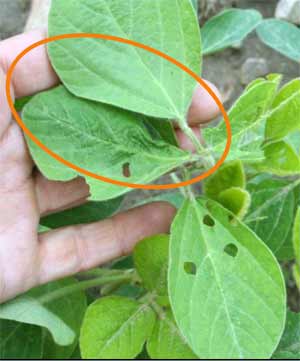 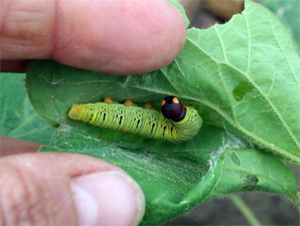 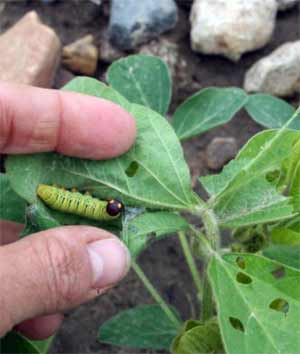