Sooty blotch, caused by the fungi Gloeodes and Leptodontidium and flyspeck, caused by Schizothyrium pomi, are two fungal disease complexes of apples and pears common in the humid fruit growing regions of the United States. The diseases can cause significant economic losses due to the unsightly appearance of affected fruit. Fruit with significant symptoms cannot be sold as fresh fruit. Both pathogens colonize the waxy surface of pome fruit but do not penetrate lower layers. Severely affected fruit tend to dehydrate more rapidly in storage compared to unaffected fruit.

The two fungi are found on a wide range of perennial hosts commonly found in the woods, including wild brambles. Spores of the two pathogen groups are available in orchards beginning approximately from late pink bloom growth stage throughout the summer and fall. 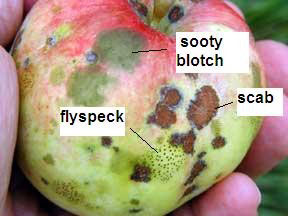 Sooty blotch colonies are olive green to black on mature fruit (Figure 1). They may be round or have feathery, diffuse margins, and infection may cover the entire fruit. Symptoms of flyspeck are appropriately described by the name of the disease. Colonies have up to 50 small, shiny black fungal fruiting structures grouped in an irregular to circular pattern.

The fungi that cause sooty blotch survive from one season to the next on apple twigs as well as other perennial vegetation with a waxy cuticle. The fungus is dispersed by wind and in windblown rainwater to developing fruit in the spring and early summer. Secondary spread from these primary colonies occurs throughout the summer. Growth of sooty blotch on fruit can begin two to three weeks after petal fall and a week or two later for flyspeck. Growth of these fungi are favored by temperatures between 65°F and 80°F, and wet, humid conditions. Growth does not occur at temperatures above 86°F. It usually takes 20 to 25 days for colonies of sooty blotch to appear on fruit after infection occurs and three to six weeks for flyspeck.

Control of sooty blotch and flyspeck is achieved through dormant and summer pruning and tree training, which opens trees and facilitates drying and fungicide deposition, and through preventive fungicidal sprays. Removal of wild blackberry from the border of the orchard can help by eliminating a potential reservoir host.