Downy mildew is confirmed just across the Canadian border, so get protectants on vine crops now.

Many areas across southeast Michigan received rain in the last week, with up to 3 inches reported. Looking ahead, a chance of rain and maybe some severe weather is forecast for Friday, June 30. The wind, which has delayed sprays, is the result of weather front movements that are typically uncommon this time of year.

The table below presents rainfall (in inches) for the Michigan State University Enviroweather stations in southeast Michigan with the amount of change from last week reported. Growing degree-days (GDD) starting March 1 are calculated using the Baskerville-Emin Method.

Carrots are coming along well. There have been issues with even germination on some small operations. Carrot seeds are small and finicky, and are especially susceptible to soil crusting. With the recent hot weather and the dry (until recently), clay soils can easily form a crust that carrot seedlings cannot penetrate. Small amounts of daily irrigation can aid in preventing crusting. Another possible cause is planter depth—if a planter places seeds at varying depths or if a field has a lot of residue in the beds, carrots can have trouble germinating.

Cole crops are growing well and being harvested on some farms. Broccoli and cauliflower have nice looking heads and are being harvested. Cabbage harvest continues. Kale and turnip greens are being harvested. Swede midge damage has been found in large conventional fields. The maggots were likely feeding a couple of weeks ago, and now the resultant “blind” plants with multiple heads can be found. 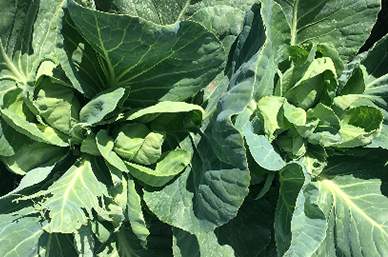 These cabbage plants have had their growing point fed upon by swede midge, causing the plant to go “blind.” Instead of producing one large head, numerous, irregularly-shaped heads are produced. Photo by Marissa Schuh, MSU Extension.

Cucumber growers should be aware that downy mildew has been confirmed in field cucumbers in Essex County, Ontario, a county over from Monroe County. The time to protect your plants is now.

MSU plant pathologist Mary Hausbeck’s downy mildew recommendations for 2017 recommends fungicide sprays include at least three product in rotation, with Ranman SC and Orondis Opti SC included, especially when downy mildew is in neighboring counties. Rounding out a spray program, other useful products include Zing!, Zampro and Gavel. All of these products should be mixed with chlorathnilol (e.g., Bravo Weather Stick) or mancozeb.

If you suspect there is downy mildew in your field, contact the Hausbeck Lab at 517-355-4576 and they can send a student out to pick up the sample for confirmation.

I’ve also seen some bacterial wilt in cucumbers this week. This disease is vectored by cucumber beetles and will kill cucumbers slowly, with vines dying over the period of a week. A quick way to determine if this is the reason your cucumbers are wilting is to slice a wilted vine near the base and pull it apart slowly. If you see viscous liquid being stretched between the two segments, bacterial wilt is the likely culprit. Removing these plants from the field and working to reduce cucumber beetle numbers will reduce the amount of infection. 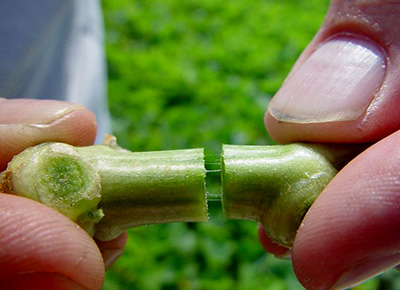 Pea harvest is wrapping up on some farms.

Potato plantings continue to grow and flower. Potatoes I’ve dug up are 1-2 inches in diameter. Specialty and small potatoes (not even necessarily of a specialty variety) continue to sell well at markets.

I’ve seen some pumpkin stands with uneven emergence, which looks to be due to issues with the planter and not a disease like damping off, or insects like seedcorn maggot. Digging in areas where a plants should be emerging to find the seed (or lack thereof) can help you determine if you’re planted needs to be adjusted or if you need to be on the lookout for pest issues during next year’s planting. Emerged pumpkins look good, though those planted into rye covers have been torn up by the cover on windy days.

Squash vine borer adults are out according to the squash vine borer Enviroweather model. I haven’t caught any in Lenawee County, but captured one adult in Washtenaw County. This moth looks more like a wasp than anything else, with clear wings and hairy legs. In the next week or two, keep an eye out for wilting plants, then check near the crown of these plants for frass piles that indicate a borer is feeding inside. 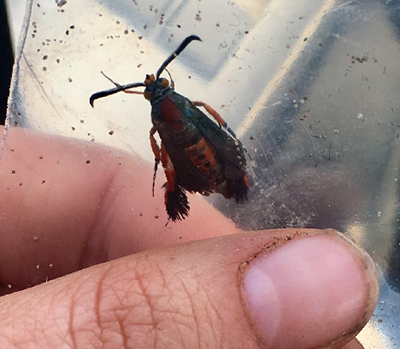 Summer squash harvest is ongoing, with harvest occurring every day. There have been some reports of unevenly-sized zucchini. This is often due to inadequate pollination during bloom.

Sweet corn plantings in successional plantings has generally wrapped up. Early plantings are tasseling and silking, with silks starting to brown in the earliest fields. European corn borer is still out in fields, and the next flight is approximately 354 GDD away. Insect Forecast weather models suggest corn earworm were brought in with storms on June 22.

My corn earworm trap in Lenawee County captured 18 corn earworm moths in a week, so earworm pressure is low. For those interested in trapping for corn earworm, brush up on trap assembly and placement with video tutorials on using pheromone traps to monitor corn earworm in sweet corn. Plantings that had high incidence of Stewart’s Wilt have recovered well.

Processing tomato planting has wrapped, and more plantings are beginning to flower.

Market tomato plantings across our region look very good, with the largest fruit roughly 2-3 inches in diameter. I have seen some lower leaves with some necrosis, which I believe is related to nutrient deficiency rather than disease.

Tomato growers of all kinds should be on the lookout for late blight, which has been confirmed in Canada.

Muskmelon and watermelon continue to flower and set fruit. Downy mildew was confirmed muskmelon in Essex County, Ontario, so protective fungicide should be applied to these crops. See the cucumber section of this report for more information.

Contact me at any time for pest and disease sampling, either at 517-264-5309 or schuhmar@msu.edu. I make updates regularly on Twitter at @SoutheastMIVeg.

I will be out of the office next week and there will be no report for our area.

Hotels are filling up for the Great Lakes Fruit and Vegetable EXPO, Dec. 5-7 in Grand Rapids, Michigan. The combination of grower-focused, research-backed presentations and an amazing exhibit hall make it a can’t-miss event.

Process exemptions within the Food Safety and Modernization Act