Corn and soybean plants have been showing signs of drought stress from hot and dry conditions.

The old adage that if you don’t like what you see in the weather, wait five minutes and it is likely to change has not been much the case in the southwest Michigan region this year. We have seen longer duration condition changes that have tended to stick around this season. Our current trend has been hot and dry. While sub-soil moisture levels and surface water resources remain near all-time high levels, precipitation has been very limited over the last two weeks. Corn and soybean plants have been showing signs of drought stress from these conditions. It is not unusual to see irrigation systems to be running in fields that still have standing water in a portion of the field.

The extreme wet conditions have led to wild variations in crop maturity in southwest Michigan. There are large numbers of acres in the heavier soil areas in Van Buren County that were unable to be planted until very late June or early July. Most of these will be prevented planting acres, although an amazing number of acres of soybeans were planted during this period. The fallout from this is that we have corn fields that range from V4 to tasseling, soybeans that range from just short of R3 to V1, and harvested wheat all in the same neighborhoods.

So far, the higher than normal temperatures have been favorable for the rapid development of later planted corn and soybeans. We will likely need to keep these on track, as well as maintain favorable precipitation levels, for the later planted crops to reach high yield potentials.

Advanced fields are in full pollination. Latest planted are around V4, the average around V8-V9. Growers have overall done a very good job at trying to manage nitrogen on corn in very challenging conditions this spring. The depth of corn color on most fields has been excellent. Dry conditions going into the most critical period for corn moisture stress, pollination and early grain fill, are worrisome for the earliest planted dryland corn.

Western bean cutworm moth flight is underway across the region. It is unclear what impact the flooded soil conditions had on larval survival. Moth catch numbers have been very low to this point in my traps. However, trap counts near Sturgis (23) and Union City (48) showed activity is ramping up. I have not seen egg masses in the few fields I have walked.

Remember, pre-tassel corn is the most likely fields female moths will find attractive for egglaying should western bean cutworm numbers increase in the next couple of weeks. Treatment threshold is reached when 5 percent of the plants have egg masses (cumulatively over the two-to-three-week egglaying period).

Asiatic garden beetles have emerged and are moving from corn fields to soybeans. Adult movement occurs primarily at night and the beetles will be often burrow underground near favored food sources during the day. Adult Asiatic garden beetles can be found in soybean fields, particularly under marestail and giant ragweed plants that escaped control this spring.

We do believe this pest was impacted by flooded soil conditions, as larvae were observed on the soil surface following heavy rainfall in May. Michigan State University Extension entomologist Chris DiFonzo has been conducting research on Asiatic garden beetles with support from the Michigan Corn Growers Association in several areas across southern Michigan. She will share some of her findings in meetings this winter.

Armyworm has been active in pockets this spring, and we have seen a much longer duration of moth flight this year than normal. A field in central Van Buren County was severely impacted by this pest over the last week. Late instar armyworm can defoliate fields quickly. While sporadic armyworm has been observed in many fields this spring, this outbreak level event appears to be isolated. These larvae were large, and should pupate soon, bringing the damage from these pests to a close. See armyworm control options.

Soybean crop stage of development is all over the board.

Weed escapes are prevalent across the region this year. Marestail remains the most prevalent, although many producers have begun using Liberty Link and or Extendimax technology to provide post emergence options for season long control. We have seen several fields that have had increased numbers of giant ragweed challenges this spring. So far, post-emergence programs in addition to glyphosate have cleaned up these populations. Be on the lookout for pigweed species that escape control.

We have been seeing increases in glyphosate-resistant common waterhemp across southwest Michigan. Palmer Amaranth continues to be a challenge, especially in portions of St. Joseph County.

Dry conditions are increasing concerns about typically what we consider to be later season pests, spider mites and soybean aphids. I have not observed either of these pests in fields this season. However, dry and dusty conditions tend to suppress fungal pathogens that keep these pests numbers low. Monitor dry corners on irrigated fields or areas along gravel roads or driveways for initial infestations.

Soybean sudden death syndrome symptoms are becoming visible in southwest Michigan fields. Wet feet in soybean plants in early spring often increases chances for root rots. This springs prolonged wet conditions in May and June set the stage for sudden death syndrome infection. Up until recently, I have not seen substantial incidence of visual symptoms of the disease. However, the telltale yellow spots and yellowed areas with brown necrosis in soybean leaves are beginning to become visible in infected areas in fields.

There is no rescue treatment for the disease, only the opportunity to keep good field notes so you can select partially resistant varieties in future years when soybeans are being raised on the field again. It is also important to note that the disease can be spread by movement of soil from infected fields. Tillage equipment or other means where soil gets moved from field-to-field can spread sudden death syndrome to other fields in your operation. Power wash equipment as it comes out of fields to reduce the potential spread of this hard-to-control disease of soybean production. 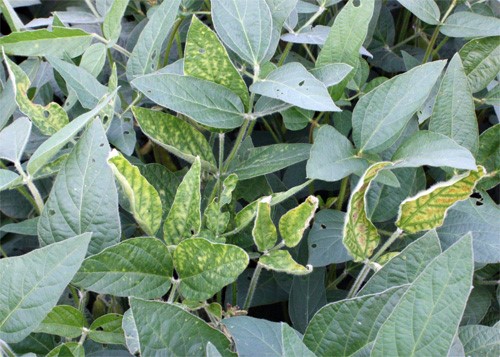