The last week has been a roller coaster ride across the southwest region.

The last seven days have been a bit of a roller coaster ride across the region. Warmer temperatures and drying conditions encouraged a few growers to get started planting in earnest last weekend. However, heavy thunderstorms Monday evening, April 25, produced heavy rainfall and some instances of golf ball-size hail stones. Luckily, the intensity of the hail was not that great and damage seemed to be limited. Rainfall was most intense in a line that roughly bordered the Cass/Van Buren-Kalamazoo/St. Joseph County lines, which then dipped south into central/southern Branch County. The Bronson, Michigan, area was particularly hard hit with wind damage.

NOAA’s 6-10 and 8-14 day outlook is predicting a bit of relief from the persistent wet conditions that we have seen over the last couple of weeks. Both outlooks are calling for drier than normal conditions. Temperatures are expected to be below normal in the near term, rebounding to normal in the 8-14 day period. 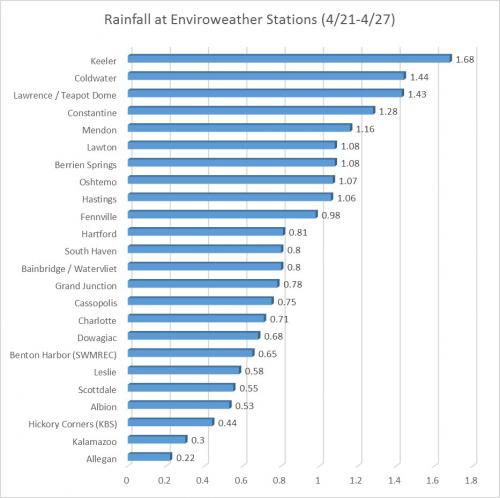 Rainfall at Enviro-weather stations in southwest Michigan during April 21-27.

Seed corn planting has progressed somewhat slowly given the field conditions through last weekend – less than 5 percent of commercial corn and less than that (if any) seed corn. Winter annual weeds are growing rapidly where tillage was not completed early this spring or sprayed. This may come into play as numbers of armyworm and black cutworm moths caught in traps in Indiana and other places to the south have been quite high this spring. The last storm front pumped warmer air up to southwest Michigan, potentially moving moths from both species up to our area. We have just put out traps, so numbers will be coming in our next report. Growers may want to evaluate the status of green material in their fields as of this week to think about where egglaying may occur. Grassy covers are more attractive to armyworms and winter annual weeds are more attractive to black cutworm. More to follow on development of these pests if significant moth numbers are found. The only other thing to note is that several annual weed species, including giant ragweed, have begun emerging this week.

Winter annual weeds sometimes help white grub populations survive during the early growing season. When you are tilling or planting, keep an eye out for high numbers of grubs being turned up by the tillage operations, row markers (if you are still using them) or planting units when you are starting to plant a field. This can be an indication of high grub numbers in a field, and potentially that you should be using a soil insecticide to protect the crop. We continue finding extremely sporadic infestations of Asiatic garden beetle larvae in the region. They are so hit or miss that it is impossible to predict where we might see damage unless you happen to notice high grub numbers before or early on when planting a field. There are no rescue treatments, so you would have to add soil insecticides at the time of planting for the best chance for control.

Some soybean planting also began over the last two weeks. I have not seen any emerged beans yet. Make sure to keep track of soil temperatures when planting to try to avoid imbibitional chilling injury. The winter annual bonanza that is playing out in fields last fall and early spring can also help soybean cyst nematodes maintain high numbers. Henbit and chickweed are alternative hosts for this chronic pest of soybean production in southwest Michigan. 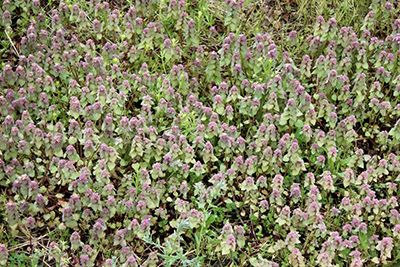 Winter wheat, while still showing some signs of cold weather we saw earlier in the month, has really began perking up and growing nicely across the region. The color is beginning to improve with nitrogen applications completed. Excellent early fall growing conditions have led to nice stands. Early planted wheat in southwest Michigan is now at Feekes stage 6 with the first node visible. Later planted wheat is probably at Feekes 5.5.

There are lots of winter annual weeds in nearly all of the wheat fields I have walked. Wheat that has reached Feekes stage 6 or is more developed is out of the 2,4-D and Banvel/Clarity (and some other products) application window, so evaluate your weed control options carefully. Michigan State University Extension’s weed specialist Christy Sprague’s Small Grain section of the 2016 Weed Control Guide can help you accurately check the growth stage of your wheat and decide what herbicide options are still available for your wheat fields if they need treatment. Refer to page 11 of 15 for the growth stage chart. This chart is located on page 121 in the print version of the 2016 Weed Control Guide for Field Crops. So far I have not seen much powdery mildew or other leaf diseases in fields I have walked. 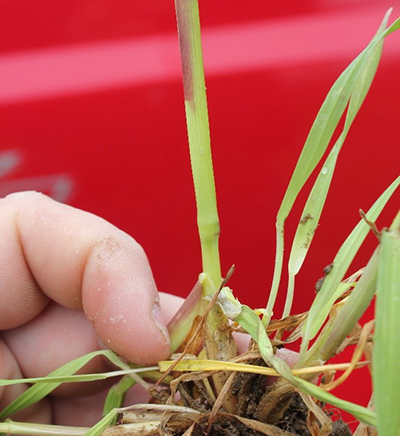 Wheat plant in Feekes growth stage 6. The bump on the stem is the first visible node, which denotes that growth stage and marks the end of some important herbicide options.

Alfalfa growth has been generally very good in fields across the southwest region. Almost all of the fields would benefit from warmer conditions. Growth is between 8-10 inches. I have not seen any evidence of early instar alfalfa weevil larval feeding. MSU field crops entomologist Christina DiFonzo generally thinks that a good time to begin looking for early instar alfalfa weevil feeding is around 250 growing degree-days base 48 degrees Fahrenheit following a period of days in late winter/early spring where it was warm enough for adult activity to have been sustained. In 2016, this occurred in early March in southwest Michigan. We have just reached this heat accumulation earlier in the week. 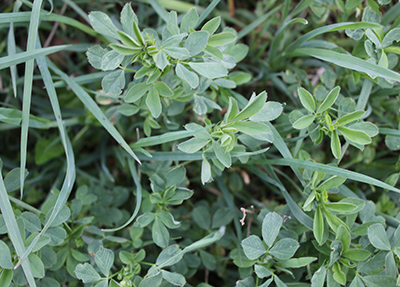 Alfalfa growth has been good in southwest Michigan. 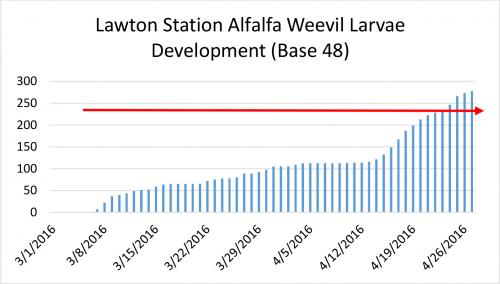 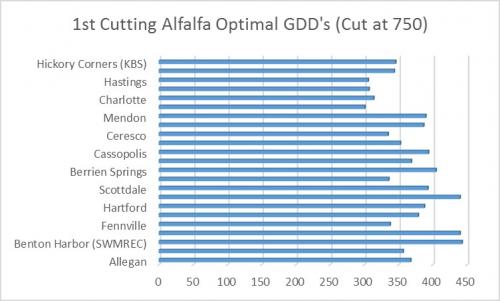 The St. Joseph County IPM Breakfast Meetings will be held each Tuesday starting May 3 through June 28 at the Royal Café Restaurant, 701 E Main Street, Centreville, MI 49032, from 7-8:30 a.m. Breakfast is on your own, but there is no registration for the program. RUP and CCA Credits (1) are offered for each program. For more information about this program, call the St. Joseph County MSU Extension office at 269-467-5511.

Resources available for reducing impacts of the 2014 cool, wet spring and planting delays