Boring is good at this point with regards to crop pests, but increased chances for heat/drought stress during tasseling and soybean flowering/early podset will increase risks of yield loss.

Rainfall this week has continued to be spotty across the region. Rainfall amounts have ranged from 0 to 0.81 inches (Fig. 1). Most of Michigan is experiencing a soil moisture deficit, particularly from late spring through the present. Figure 2 shows rainfall deficits for select Michigan State University Enviro-weather stations from May 15 to the present. Most of the Lower Peninsula is suffering from dry conditions with several counties in the southwest being abnormally dry (Fig. 3). The next good chance of rain will be Sunday night and Monday, July 17 and 18. The NOAA models are predicting only a 60 percent chance of rain at this point, but according to Jeff Andresen, MSU climatologist, if we do get rain, there is a good chance that it will be more widespread rather than the hit-or-miss showers we’ve had recently.

Temperatures will be lower over the next few days, closer to the 30-year averages, with highs in the upper 70s and lows in the 50s and 60s. After the current trough moves through, temperatures will return to the 80s and 90s by next week. The National Weather Service is predicting warmer and dryer than normal conditions for southwest Michigan for the remainder of July. 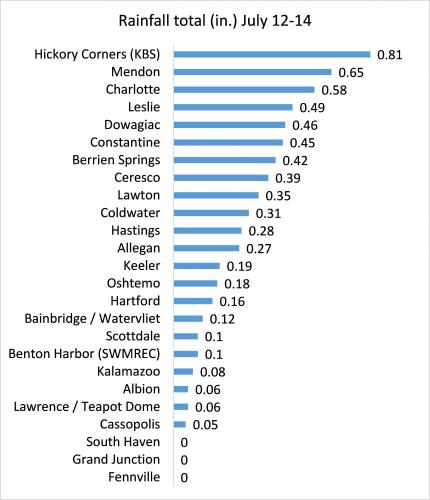 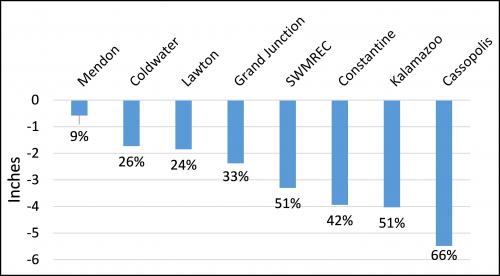 Figure 2. Rainfall deficit from May 15 – July 14, 2016, for select Enviro-weather stations in south central and southwest Michigan. Numbers denote the numerical (y-axis) and percentage (data label) deficit compared with the average of the previous five years. 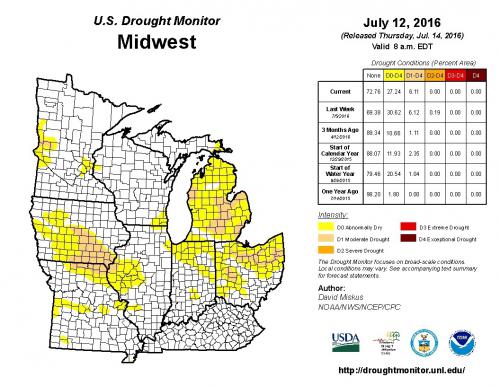 You can receive text alerts and/or email alerts from MSU Enviro-weather for reference potential evapotranspiration (RPET) at the MSU Envrio-weather RPET Alert Service sign-up page. Because the alerts are customized, you need to create an Enviro-weather account, then select the station(s) that you want the alerts for. The alerts come in daily at about 5:20 a.m. You can specify text alerts, email alerts or both, and you can have alerts for as many stations as you’d like. If you just want to download RPET values rather than receiving regular alerts, you can select “Potential Evapotranspiration” under “Water-use tools” on the menu for a given station at the Enviro-weather website.

Early-planted corn in irrigated fields is beginning to tassel, and detasseling crews are getting geared up in seed corn. Corn in non-irrigated fields and dry corners is showing signs of drought stress with rolled leaves and some stunting. Aside from water stress, the crop looks good with no major insect or disease issues reported. Irrigation is the most crucial for the three weeks following tassel initiation, so if corn is not receiving approximately 1.5 inches per week from either rainfall or irrigation, significant yield losses are expected. Seed corn foliar fungicides are being applied to protect against rust. Japanese beetle and other silk clipper insects can be found, but numbers are relatively low this year in most fields we have walked that are in pollination.

Most soybean fields are looking good and have reached R1 or R2 (at least one flower anywhere on the plant and at least one flower at one of the top two nodes, respectively). Some fields not under irrigation appear stunted and, although they have begun to flower, have only produced three or four trifoliates. Yield potential in these cases may be significantly reduced as the number of possible pods decreases as number of nodes decreases. White mold tends not to be as much of an issue in hot and dry conditions unless irrigation is applied often. Weed control in most fields has been good although there are a few fields around that are still weedy. Lambsquarters has been more challenging to control this year as it tends to produce a thicker cuticle under dry conditions making herbicide penetration more difficult. Remember that R2 is the last stage when glyphosate products can be safely (and legally) applied; plants at R3 have a pod three-sixteenth inches long at one of the four uppermost nodes on the main stem with a fully developed leaf. Christy Sprague, MSU Extension weeds specialist, is receiving more and more calls about waterhemp and horseweed escapes in fields and recommends that growers with fields having a history of problems with these weeds should consider planting LibertyLink soybean next year.

Because of the highly variable rainfall this season, growers in areas that have missed more rain events than most should keep an eye out for spider mite infestations. Spider mites exist in virtually every field. However, during extended periods of hot and dry weather, populations of this pest can increase rapidly. While we primarily think of spider mites as a soybean pest, they can cause leaf tissue damage to corn as well. Monitor dry areas of fields that are close to gravel roadways or heavily used farm lanes. The dust can drop the relative humidity in these areas, further reducing the effectiveness of pathogenic fungi in controlling the pest. Initial leaf symptoms appear as stippled yellow areas on the leaves. More advanced symptoms are leaf bronzing, followed by leaf necrosis or leaf drop. MSU Field Crops Entomologist Dr. Chris DiFonzo recently published a resource of spider mite scouting and treatment options. If caught early enough, spider mites can sometimes be spot treated along field edges and hotspots. If the dry weather persists, everyone should include scouting for spider mites on their to-do list.

Manganese deficiencies in soybean fields with soils higher in pH or organic matter are becoming quite evident over the last couple of weeks. Apply foliar Mn early and perhaps more than one time to help alleviate this deficiency for best yield results. Mike Staton, MSU Soybean Educator, provides an excellent article on how to address Mn deficiencies in soybean production.

Wheat harvest is underway, and initial observations are promising. Test weights have been good with numbers as high as 61 pounds per bushel (60 being the standard). Moisture levels have been generally 13–15 percent. Vomitoxin (deoxynivalenol, or DON) levels have been mostly under 0.3 ppm, well below the levels at which grain will be discounted (1 ppm for soft white wheat and 2 ppm for soft red). See MSU Extension article “Testing wheat for DON levels” for more information. Yields have also been very good with most reporting 70–80 bushels per acre, a few over 100 bushels per acre, and one grower reporting between 120 and 130 bushels per acre. Now if the prices would just edge up a bit.

As was reported in a recent MSU Extension article “Late blight found in potatoes in Michigan’s Branch County,” late blight has been spotted in potatoes in the Bronson, Michigan, area. The fungus strain was confirmed to be US-23, which is known to be sensitive to Ridamil, and no other cases have been reported in the area. Other diseases affecting potato have also been found in several fields in Michigan (see “Blackleg and tuber soft rot disease reported in some Michigan potato fields”). The tuber bulking stage in early-planted fields has begun, and weed control efforts have finished in most fields. Aphids would normally begin appearing about this time but have not yet been seen this year. This time, boring is good.