Uneven rain has brought a mix of crop and pest effects.

Rain events over this past week have helped to alleviate water stress in crops, but rainfall was not uniform throughout the region (Figure 1). Rainfall deficits persist even in areas that received higher precipitation this past weekend (Figure 2), with a regional average of 30 percent less rainfall since May 15 when compared to the previous five years. Corn on dry corners and non-irrigated ground had rolled leaves that were easily seen from the road, although we have noticed that rolling was not as bad as would normally be expected under these dry conditions. The U.S. Drought Monitor shows that though much of the Lower Peninsula is either abnormally dry or under moderate drought (Figure 3), the southwest region is no longer included. Again, this generalization does not reflect the uneven rainfall patterns this spring and summer.

The 8-14 day outlook from NOAA predicts normal temperatures but lower than normal rainfall in southwest Michigan. The corn growing-degree days (GDD) base 50 degrees Fahrenheit / max 86 F for the region since May 15 – when many fields got planted in the region this year – are about a day ahead of the 6-year average (Figure 4) with another 160 GDD predicted for the coming week. 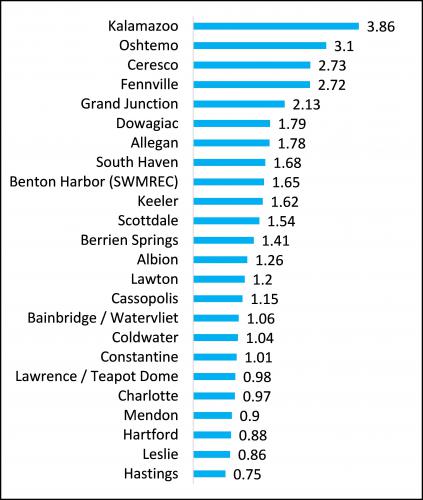 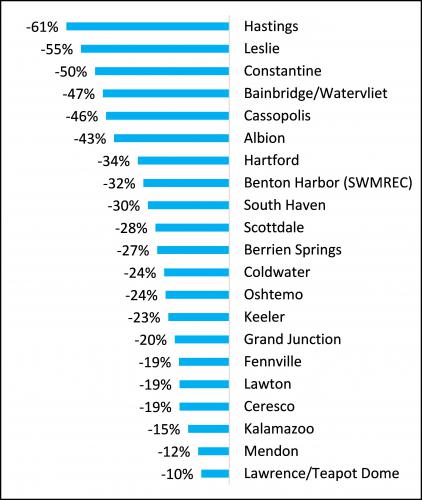 Figure 2. Rainfall deficit from May 15 – July 28 in 2016 compared with the five previous years at several Enviro-weather sites. 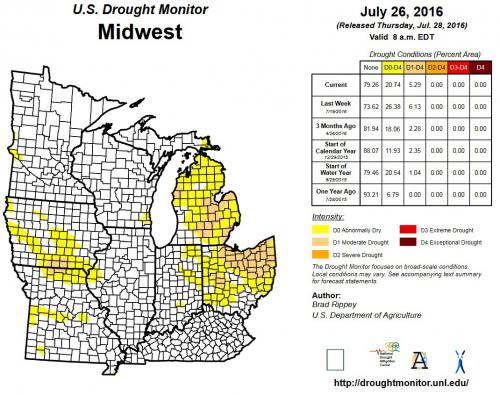 Figure 3. The U.S. Drought Monitor for the Midwest as of July 26. 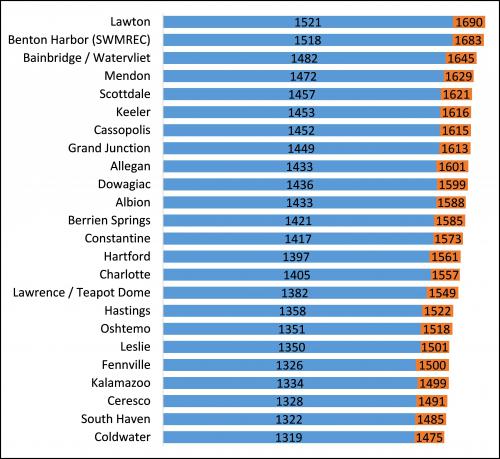 Figure 4. Corn growing-degree days (base 50 F/max 86 F) accumulated from May 15 through July 28 (blue) with predicted totals through August 3.

Corn is near tasseling in some fields and has finished pollinating in others in the region. Dryland corn in moisture deficit areas has been under severe moisture stress. Even heavier soils have just about exhausted soil moisture reserves. The USDA Crop Progress Report released July 25 showed 54 percent of corn in Michigan had reached silking. 56 percent of corn in the state was rated as good or excellent with an additional 31 percent rated fair. Several reports were received of corn leaves unrolling almost as soon as fields received rain this past weekend. With evapo-transiration rates as high as 0.3 inches per day, additional rainfall will be critical across the region if yield losses are to be avoided. With extreme heat and widely scattered rain in the forecast, Michigan State University Extension advises to keep up with the irrigation to the best degree possible.

Early planted soybeans are approaching R3. Later planted beans are at R1. Pest and disease challenges vary widely depending upon the amount of moisture that have been received. Areas that have experienced drought conditions have been having challenges with spider mites. Most fields where I have seen spider mites have had elevated populations along field edges, especially along gravel roads. I have found a few spots where we have seen “blow ins,” which are small groups of plants that have high levels of mites. Spider mites spin webs and move on wind currents. Growers that have fields with spider mites at populations high enough to consider treating field edges should be on the lookout for these blow in spots in fields. If the temperatures remain hot, usually organophosphates insecticides work the best. See “Potential for spider mites, especially in southern Michigan” by Chris DiFonzo for more information. 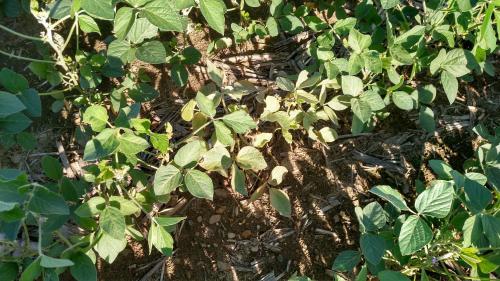 Spider mite "blow in" hotspot in irrigated soybean field in Cass County. While irrigation can help pathogenic fungi to help keep spider mite populations lower than surrounding fields, once the pest is in the field, hotspots represents a risk for further spread of the pest.

In areas where rainfall has been adequate, especially under irrigation, we are beginning to become concerned with white mold development. Excessive heat is often thought to reduce the incidence of the disease, but is not a sure thing. Irrigation followed by heavy rainfall can often trigger the germination of sclerotia. Fields with heavy white mold history are likely at the most risk.

We are seeing some evidence of soybean sudden death syndrome in fields. The most common visible symptom at this point is the circular yellow spots on some leaves. This can be quite subtle and does not represent a yield loss risk at this point, but can be something to watch for further development.

I have not seen many soybean aphids at this time. There are some potassium deficiency symptoms in light texture fields, which I almost always check for aphids.

Alfalfa has been impacted by drought conditions in many fields. Potato leafhoppers are also really taking a toll on second and third cutting alfalfa. Given the number of fields in southwest Michigan that have been impacted by this pest, I think growers should just consider treating their early regrowth alfalfa to control damage from this pest (this year).

Are we done planting in central Michigan?