While some areas were lucky enough to experience recent thunderstorms, many areas were not as fortunate.

West Michigan was treated to a spectacular light show courtesy of Mother Nature during the overnight hours of June 15-16. Overall average rainfall totals were around 0.75 inches, with wide variations in these numbers.

We have extreme variations in crop development due to planting date. Early planted corn (April) is now at V8 (30 inches) at the maximum end of the spectrum. Late planted corn is V2-V3. Since a lot of corn went in during the May 15-20 window, the second graph below denotes Growing degree days (GDDs) since May 15, 2016. Corn planted in this window is V5-V6. With warm temperatures and bright sunshine in the immediate forecast, these totals are expected to shoot up quickly over the next seven days. 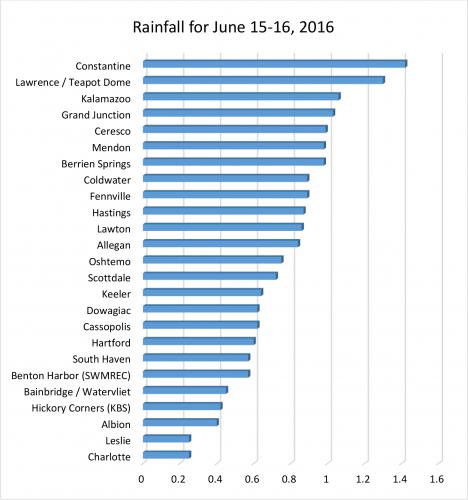 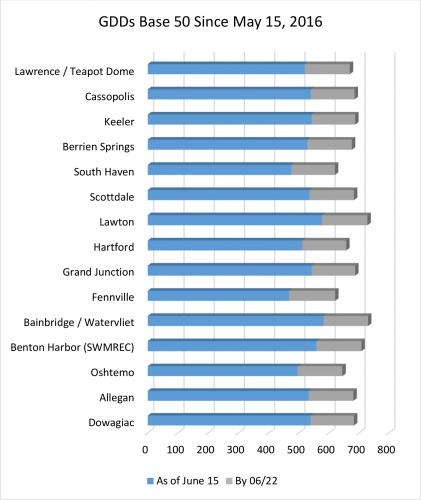 We have seen good growing conditions for irrigated corn, and corn on heavier soils. Corn on lighter soils that has size has went through a little moisture stress period in a few locations, but overall still looks good. Recent rainfall should help. Last week we continued to find sporadic fields where armyworm was above threshold. Almost all of these had a terminated grassy type cover crop in the field. We encourage growers to monitor fields where grassy covers were established. In all cases (so far), the infestations were confined to a single or pair of fields. If you end up having to treat, consult your herbicide and insecticide label to check for possible interactions or avoid any insecticide containing organophosphates. There are lots of choices for insecticides to use, so this should not be a challenge. I have found some fields with low to moderate numbers of white grubs, both Japanese beetle and Asiatic garden beetle. Continue to watch for fields that seem to go backwards in terms of stand height uniformity. No rescue treatment is available, but it can help you to think about what you may want to do in future years. We should also be in the time frame when Western and northern Corn Rootworm larvae will be feeding on roots. They also can cause this uneven plant growth and stand height going backwards. The white grubs will begin to pupate and emerge as adults fairly soon. Slugs also remain active, especially in fields that were no-till or had heavy killed cover crops. Most corn will grow beyond the window of vulnerability of damage from these pests soon.

Herbicides and nitrogen have been going on quickly on most fields. We should not have lost much nitrogen to leaching or de-nitrification this spring, so you may want to factor that into you sidedress application rates (if you are not done already).

There continues to be stripped corn in fields across the region. We suspect that the majority of this is being caused by Sulphur deficiency, especially on the lighter soils. Many folks are including Sulphur in their corn fertilizer programs. Usually 20-25 pounds per acre (actual) will provide sufficient S for corn growth. In visiting with Dr. Kurt Steinke, MSU Fertility Specialist, he says that there is little difference between sources of Sulphur. Many folks have used ammonium sulfate. Gypsum can also work, but it is hard to apply gypsum at rates low enough to apply Sulfur at rates equivalent to that provided by the ammonium sulfate. If you are seeing stripes, check your soil test for pH and Magnesium levels. If they are adequate, Sulfur is likely the culprit. Zinc deficiency can also cause striping, but this is much less common. Zinc deficiency is most often seen early with cold and wet conditions or on soils with high pH and/or high P levels. 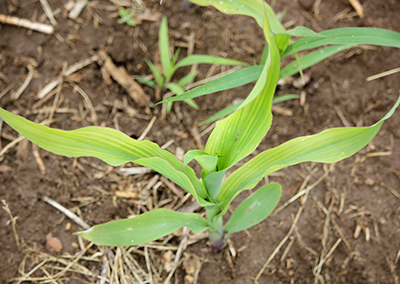 As MSU Extension soybean educator Mike Staton has noted, stand issues where beans were planted during wet conditions is the most common problem seen. Thin stands that were crusting as a factor are the most problematic. Other than that, soybeans look pretty good over the region. 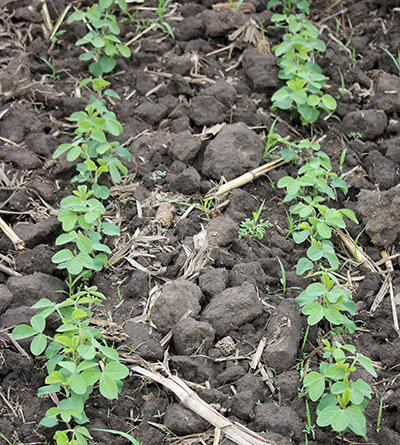 Soybeans planted in some less than favorable conditions. Despite clods, the stand is quite good.

Pests. There is some activity from bean leaf beetles on later planted soybeans but it remains well below the defoliation threshold. I have not seen soybean aphids.

Weeds. This may be a year to be prepared to spray post emergent weeds sooner rather than later. Competition from weeds for moisture on dryland fields with sparse rainfall can occur faster than normal for the later planted soybeans. If you are applying roundup, be sure to keep rates up on drought stressed weeds and use spray grade ammonium sulfate at 17 pounds per 100 gallons to give the product the best chance to succeed.

Irrigation. While we needed irrigation to help smaller soybeans get up and running, be cautious about irrigating them too much early in the growing season. We often see challenges with white mold on fields where plants get too much early season vegetative growth. There seems to be a fine line between providing enough water to promote early growth and creating a low air flow situation on irrigated soybean fields with white mold history.

SDS and SCN. We are moving into the growth stages where we should begin seeing early onset symptoms of SDS on early planted soybeans. Early SCN symptoms can also often be seen in later June and early July, and again more towards the end of the growing season. Look for yellowing and stunted plants. SDS will often show the yellowing leaf mottling symptoms. Areas of fields that have heavy SDS pressure may show stodgy growth during this stage.

Wheat is in the later grain fill stages. More advanced fields are starting to lose a bit of the deepness of their color. It is unclear if this is due to moisture stress or if it is the early stages of maturity, but we are getting close in some fields.

Early harvested alfalfa is nearing second cutting. Potato leafhopper numbers have been on the increase over the last week. Keep an eye on early regrowth or fields where first cutting was delayed or harvested recently. 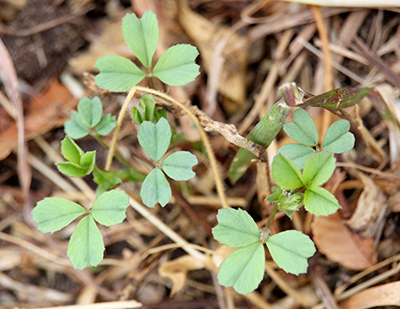