The western part of our region has been dry for the last seven to 10 days.

Weather turning dry in the western portion of the region has been the bigger story over the last seven to 10 days. Rainfall in the eastern portion of the region helped to provide some relief with totals of around 0.5 inches or so, but areas to the west of US-131 and south of I-94 remain largely dry. Cooler than normal temperatures slowed the growth of corn and soybean that rocketed out of the ground in many cases. That was good, because in general, planting was two weeks behind normal due to wet weather and cold temperature this early planting season. 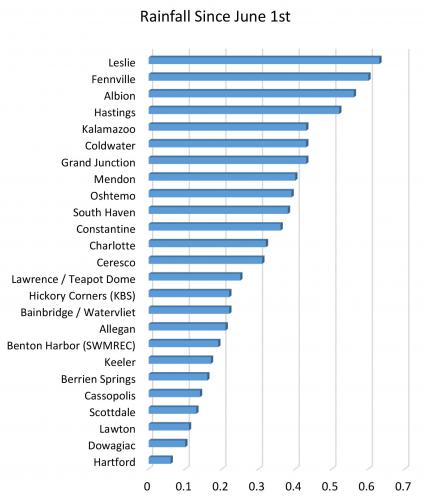 Rainfall since June 1, 2016 in southwest Michigan.

Early planted corn is around V5-V6, with sidedressing operations going on quickly in early planted corn. Pre-emergence weed control programs worked reasonably well for corn planted in late April. The majority of corn was planted around May 20 and later. This corn is V2-V3. Pre-emergence weed control programs are variably effective depending upon timing of spray, rainfall received and availability of irrigation to activate the herbicide. We expect some challenges to persist and post-emergence sprays to be applied in many areas.

Some growers have asked about going to a straight, early post-emergence program to control weeds. Michigan State University Extension weed control specialist Christy Sprague and the MSU weeds crew published the results of their 2015 early post-trials, which can provide some guidance in how the programs they evaluated last year performed. In general, evaluate the weed species you have in the field, make sure the product you choose can address the weeds you have, and choose accordingly. MSU Extension’s “Weed Control Guide for Corn” (Table 1B, page 3) can help show the relative effectiveness of the herbicide components.

We have also gotten a few questions on Roundup-Atrazine as a post-emergence. There are a couple of things to consider in these delayed planting seasons. The later atrazine is applied in the season, the more potential there is for carryover effects in soybeans next spring. Be cautious with the rate at which it is applied. On the positive side, there is better potential that common lambsquarters will have germinated by now, which means the triazine-resistant lambsquarters may be controlled by the glyphosate being applied, and if and when we do get rain, the atrazine may hold back other broadleaf weeds.

There are a lot of good, effective post-treatments available for use in corn. This is why it is a great time to look at what is predominant in the field and choose a program that works well with the weeds you actually have in the field, as well as weeds you know have been challenges in the field in the past. As temperatures warm, the crop and the weeds will hit high gear, so be prepared to spray and make sure the crop and weeds are in the window where they can be controlled.

There was a field up in Van Buren County that had high levels of armyworms found June 1. The larvae were 0.75-1 inch in length. The eggs were laid on a ryegrass cover crop that had been terminated in early April, but presumably took quite a while to lose color. Larvae this size still have significant time to go before pupation and can really cause damage quickly. In this instance, they were discovered crawling on the drag hose of a manure application system and the corn had not yet been planted.

Other fields that I knew had significant amounts of “green” in late April or early May in the area were walked over the weekend and revealed very little armyworm feeding damage. Look for the “ragged” leaf margin feeding symptoms or leaves eaten down to the midrib (severe). At this point, it is definitely worth walking fields but not automatically attempting to spray fields with foliar insecticides because of the highly sporadic nature of armyworm outbreaks. This grower walked all of his other fields, including a nearby wheat field (most susceptible to egglaying from these pests) and found virtually no damage.

Several commercial Bt corn events can help protect against armyworm feeding. Most notably, those with the Cry1F event (Herculex, SmartStax) should be protected to some degree. There are others. This is a great time to refer to MSU entomologist Chris DiFonzo’s Handy Bt Trait Table for more information. The grower treated the field and field margins on adjacent fields, and the problem was solved quickly. If it was not caught, it would have been a real problem for emerging corn.

If you walk corn fields, you can find sporadic levels of cutworm clipping. Some fields may be around 0.25-0.5 of a percent. This can present a challenge in seed, but is not worth chasing for commercial corn, and realistically probably not in seed either. You will notice this easier if you get patches where several moths laid eggs. Nothing approaching the 3-5 percent that we normally consider threshold for treatment in commercial corn. However, due to the sporadic nature of this pest, it is prudent to continue watching for clipping in fields and be prepared to spray.

This prehistoric two-legged “cutworm” is active and in high numbers in many fields. Look for damage down the row with excised plants discarded on the soil surface. Look for carcasses (corn plant, not bird!) that have roots exposed on the soil surface. Corn is vulnerable from V1 until V6. Scaring off the pest is the best rescue option. Consider using a seed treatment next year on corn if the stand loss is severe.

Look for elliptical feeding damage holes (long, narrow) in leaves. Slugs are sometimes pests of corn and soybeans, more notable in no-till and minimum till situations, and are more problematic in wet springs. Insecticides do not work because the pest metabolically is more of a snail than an insect. Bait is a potential rescue treatment, but to be most effective, it should be applied early in the season though V5 or so.

Asiatic garden beetle white grubs are sporadic, but their range continues expanding. Watch for corn stands that become very uneven in plant height and vigor. Take a shovel and examine roots. They tend to feed on the smaller root tissue, disrupting water and nutrient uptake, affecting top growth. Asiatic garden beetle larvae have white “palps” on their cheeks. They are also much more active than their Japanese beetle cousins, and will rapidly move across your hand. If they bite you, you can be sure it is an Asiatic garden beetle larvae.

No rescue treatments are available, so all we are left to do is muse over the most commonly asked question: Why were there so many of them in this field and hardly any in surrounding fields? I do not have a good answer, except to say they seem to love to party and mate, so if there are large congregations of them in your area in the summer, you may be in for problems next spring. Watch fields that were planted to soybeans or potatoes the previous season. Damage is almost always focused in fields on sandy knolls, but can be fairly widespread throughout the field. Soil insecticide or heavy rates of seed treatment in subsequent years can help.

Due to the sporadic nature of outbreaks, it is tough to “stay the course” in scouting or deciding to treat for these pests. Expect damage in fields now until about the last week in June to early July. You can often find emergence holes in fields in surprising numbers where they pupate. The adults look like Japanese beetles, but are an iridescent cinnamon color. We have had reasonable luck catching Asiatic garden beetles in our western corn rootworm traps. It is not the pheromone that draws them in, but rather the sweet smell of the pink RV anti-freeze (propylene glycol). There is a darker red version of this material that is more effective than the lighter pink. There are no developed thresholds.

Early planted soybeans look good. Early post-herbicide applications are going on in some locations. Beans that were planted later have had varying challenges. Beans planted when fields were wet have had challenges getting through the soil surface in some instances. We have seen some fields where row cleaners have pushed up soil that fell back into the row, some places where clods impacted seed/soil contact, and some that seem to be planted too deep for the conditions. Later planting dates when the soil was drier at the same planter depths setting may have almost perfect stands. In any event, the beans seemed to have responded well to good planting conditions, poorly to those that were more challenging.

Most fields are reasonably clean to date. Be sure to keep an eye out for problematic weed species such as waterhemp, palmer (pigweeds) and marestail as the season progresses. Post-emergence sprays should go on before the competition gets too great from weeds. Competition will include moisture stress this season if we do not receive adequate rainfall soon, so be prepared to move up your spray schedules if dry weather persists.

There are not a lot of problems from insects at this juncture in fields that I have walked. There has been some cutworm clipping in a few places, but not in high enough numbers to worry about. Keep cutworms in mind over the next couple of weeks because of their sporadic nature.

There have been some reports of seedling diseases in a few areas. The major seedling diseases we have here on lighter soils are Pythium, which is a mold favored by prolonged cool, wet soil conditions, and Rhizoctonia, which favors warmer conditions. Both diseases can exhibit dampening off-type of symptoms. Rhizoctonia often shows reddish-brown lesions on the hypocotyl and cotyledons. Pythium is more often seen as seed rots and missing plants. If you had some stand losses due to seedling diseases, jot that down in your field notes and consider using the seed treatment that is active against the disease you had in your field. Consider sending some of the affected seedlings into a lab for identification of the pathogen. This is important because different fungicide active ingredients are optimal at controlling these diseases.

We started off with little stripe rust but ended up having challenges with it in several areas, especially in Kalamazoo, Van Buren and Allegan counties. Caramba and Prosaro were the preferred treatments. Head scab sprays did help control it, but were applied late enough that yellowing and leaf marking appeared on many upper leaves. This was the worst year in Michigan for stripe rust, and unfortunately we are learning about the virulence of this disease on the fly. We may be asking wheat growers in a field survey what wheat variety they raised, what fungicides were sprayed and when, and evaluate the upper leaves for stripe rust to gain more insight as to how this disease responded to our management efforts this year. 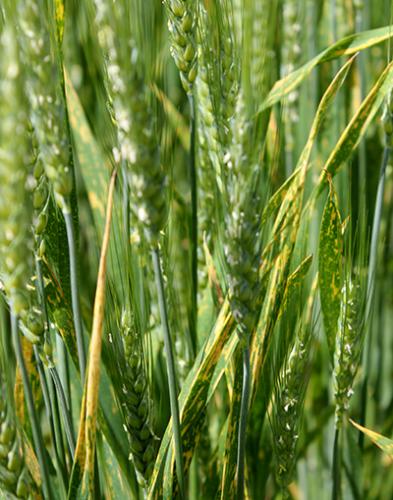 Armyworms. We have been on the lookout for this pest all season and I have yet to see significant armyworms in a wheat field in the southwest region. However, because we found a field in Van Buren County that was infested in a cover crop, it remains important to continue monitoring for the pest. It is by far the most common target crop impacted by the pest, and it can be devastating when it occurs in high numbers in wheat in the grain fill stage. Remain vigilant in monitoring for the pest. Watch for ragged leaf margins, which are the symptoms of armyworm feeding.

Cereal leaf beetles. There has been a resurgence of this seldom-seen pest, close to threshold in some fields (one larvae per leaf). The adults are small, black beetles and the larvae are soft and irregularly-shaped. Feeding symptoms are linear tracks of windowpane-type feeding. 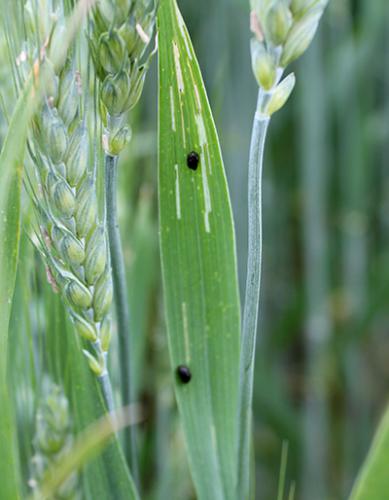