Growers in the southwest region should look for frost-damaged corn to see if areas of the field need to be re-planted. 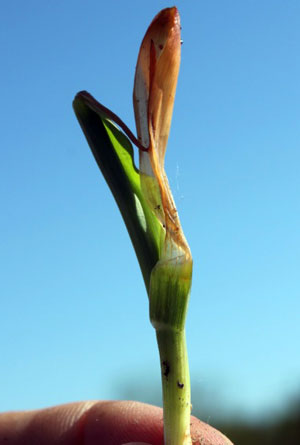 Splash and dash rain showers have not impacted planting and field conditions much, so dust has been flying across the region fairly steadily over the last week. A hard frost on Mother's Day (May 12) overnight did cause damage to early planted corn that was around V1. It remains to be seen if the lower areas will suffer stand loss. Temperatures west of Paw Paw, Mich., dipped to around 23 for a short period at the Tea-Pot Dome Enviro-weather station in the early morning hours. Leaf burn in low spots is pretty severe in some fields. I will re-check for stand loss later this weekend. The good news is that most of the emerged corn and soybeans will most likely recover. If we have to replant areas in fields, it is early enough in the season to do that quite nicely (more in the commodity reports below).

The 6-10 and 8-14 day outlooks are predicting near normal temperatures turning cooler than normal towards the end of the period, with above normal precipitation over the period. Base 50 GDD accumulation in Three Rivers, Mich., since March 1 were 180 to 152 as of May 16, compared to the long-term average of 140. At this time of year, we normally start counting GDDs since May 1 Since May 1, the Enviro-weather stations have accumulated 184 GDDs base 50 (averaged across the region). It normally takes around 115 to 125 for corn to emerge. We normally accumulate 10 GDDs per day next week. 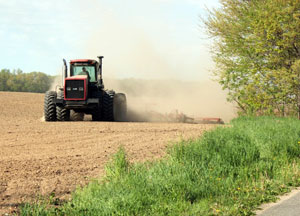 Excellent soil moisture conditions are being seen widely across southwest Michigan. Most producers have been making good progress in planting corn and soybeans. In areas of Cass County, the majority of the corn is planted and soybeans are going in quickly. In areas with heavier soils, we have had good conditions for field work and planting for around a week or more.

Winter annual weeds grew quickly with the warmer and wet conditions. Michigan State University Extension advises growers to continue monitoring fields for black cutworm larval feeding where the green mats were thick before planting. Cutworm numbers in Indiana have been on the upswing for the better part of two weeks now. Annual weeds such as giant ragweed, lambsquarters and the grasses are beginning to emerge in recently planted fields. Remember that most pre-emergent grass weed programs only will control weeds up to 1 inch in height or less. Watch fields carefully for grass seedling emergence in situations where you are planning to use delayed pre-emergence weed control programs. 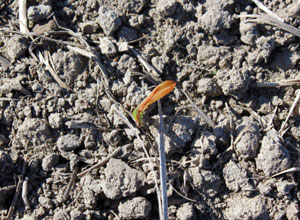 Both early planted corn and soybeans have begun to emerge. In general, stands look good. Growers in the southwest region may particularly be looking at frost-damaged corn to see if areas of the field need to be re-planted. In fields I looked at so far, I think the number of acres that will need attention will be low. Begin checking the plants carefully over the weekend. There is a fair amount of leaf tissue damage that the plants should be able to grow out of. Keep in mind that the seedlings are living off of the energy reserves in the seed right now.

What is more important, however, is the tissue inside of the stem near the ground level. Look for water-soaked, yellowed or brown material as you unroll the stem. Since it is only May 16, you can see how affected portions of the fields grow out of the damage for a few more days. If the plants are not responding by early next week, you can make a better decision about re-planting. Most fields I have walked have severe damage only in the lowest areas of fields, especially where topography may have caused a "cold air dam" to prevent frost drainage. However, temperatures did get pretty cold, as you can see in the table below from the Enviro-weather stations across the southwest region. Purdue's corn agronomist Bob Nielsen has an excellent article on evaluating frost-damaged corn.

Winter wheat has been progressing well. It remains to be seen if the cold conditions will impact the crop. There is some slight powdery mildew in lower canopy in the fields I have walked. 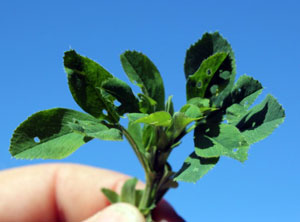 Alfalfa growth has been good recently. Some fields are being treated for alfalfa weevil tip feeding in Van Buren County. Most fields I have walked are just below threshold, but are more than one week away from harvest, so scouting and potentially treatment is warranted. Our cutting model for harvest is at 480 GDD base 41 since March 1. We suggest harvest at 750 GGD's for high quality dairy hay.