Dry conditions this past week provided growers with the best opportunity for planting so far this season.

No locations in southwest or south-central Michigan received rainfall in the past seven days until last night, May 26. High temperatures have been in the 70s to lower 80s, and forecasted highs during the coming week are forecasted to remain in the 80s. Rainfall Monday evening, May 25, brought the dry weather streak to a close for the western portion of the region, but left favorable field work conditions for locations further to the southeast. 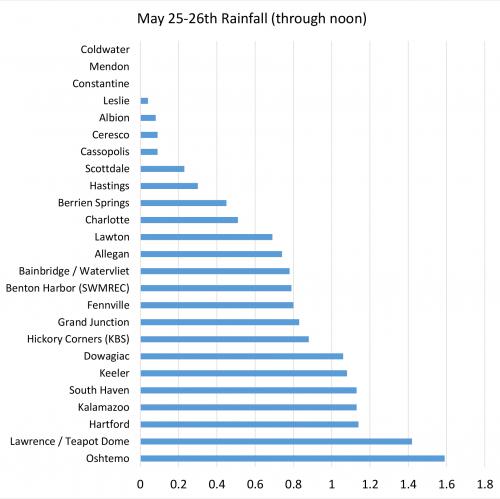 We have not yet reached 300 growing degree-days (GDD), which is generally the time to begin scouting for black cutworm feeding. However, forecasts for all Michigan State University Enviro-weather stations in the southwest and south-central regions show that all locations in this region will have accumulated 300 GDD by the end of next week. We are coming close to matching the six-year average for accumulated GDDs for this time of year. 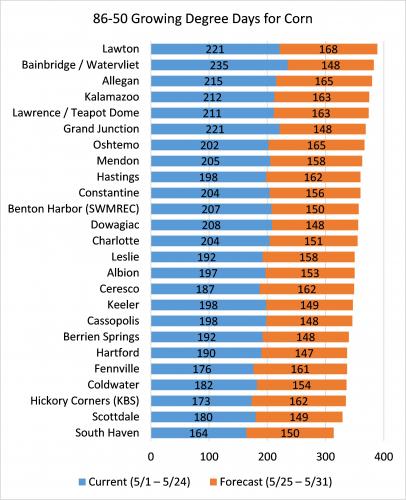 According to NOAA’s 6-10 day outlook, temperatures are expected to be above normal, so we should match or surpass that six-year average in the next one to two weeks. However, with at least a 50 percent chance of rain in the forecast for the next few days, growers may be forced to take a well-deserved break over Memorial Day weekend. 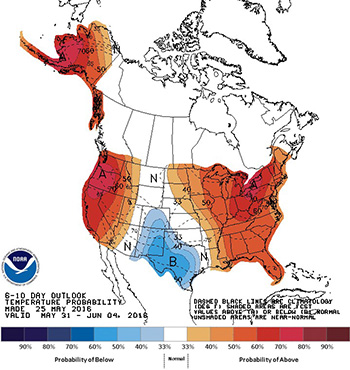 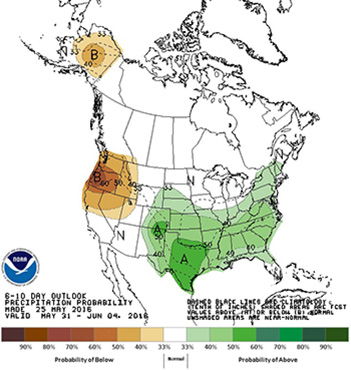 Corn planting progress in Michigan has nearly doubled since last week. Corn was 65 percent planted as of May 22 compared with 34 percent the previous week, according to the USDA National Agricultural Statistics Service Crop Progress Report. However, we are still currently behind the six-year average (72 percent) and the rest of the corn-producing states this year (86 percent). Corn emergence in Michigan is similarly behind schedule for this time of year (17 percent compared with 38 percent on average for the last six years). Most emerged corn is at V2 and looking healthier than last week due to warmer temperatures.

As mentioned above, black cutworm clipping would be expected to start from larvae that have reached the fourth instar stage or larger. Be prepared to scout non-protected fields that were “green” on or around May 1. If there is any damage from these pests, it will likely be highly sporadic in nature and certainly worthy of a look, but not an investment in a preventative insecticide treatment. Also, if you do have to treat fields for armyworms or cutworms, be aware there can be herbicide/insecticide interactions if you use an organophosphate insecticide with some herbicides, especially those with a herbicide site of action Group 27 (HPPD Inhibitors), 14 (PPO inhibitors) and 2 (ALS inhibitors). To help avoid this, you should use pyrethroid-based insecticides to control these pests.

Soybean planting progress has been similar to that for corn with 34 percent of soybean acres planted as of May 22 (compared with 48 percent averaged over the past six years) and only 6 percent emerged. Some growers in southwest Michigan are breaking out the “R” word (rotary hoe) for the first time in a long time in our region because of crusting on beans planted in heavier soils. The expected extended period of rainfall should keep most of the rotary hoes out of the field and back in the fencerows, which is a good thing. Stands on most early planted fields look reasonably good.

Warm conditions mean shorter windows of opportunity for weed control. If you are planning on using a straight delayed pre-emergence program in corn, you will need to carefully watch the size of the emerging grass weed species. About 0.75 inch is all the reachback you will get with some of the more common pre-emergence grass programs. Also, keep in mind that these warm, moist conditions are just about perfect for weed growth. Keep an eye on rapidly changing weed sizes and make sure your program can handle the size of the weeds you are currently or will be seeing in your fields.

Seed corn planting has been progressing very quickly with the warmer temperatures and drier conditions. Hot conditions early in the season can leave short turnarounds in trying to plant male rows with proper delays.

Alfalfa first cutting has begun in the region with many locations reaching 750 GDDs base 41, since March 1, which is generally considered the optimal timing for first cutting. Many growers took advantage of dry weather to put up first cutting hay. Hay volume would look to be down around 20 percent compared to normal yields. Quality should be excellent, however. Keep an eye out for alfalfa weevil, which can impact the regrowth, especially in fields that were harvested earlier than normal. Last night’s wind-driven rainfall lodged some of the un-cut alfalfa in Van Buren County. 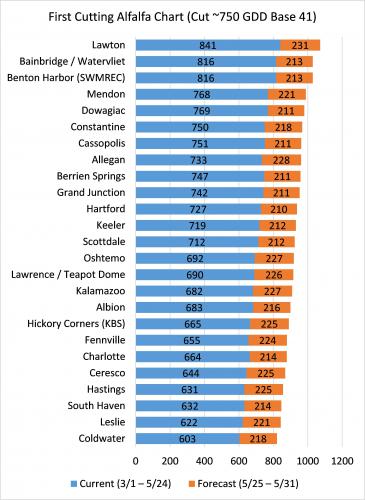 Wheat remains the field crop bright spot in the southwest region. Growers look to have protected the crop from diseases, which may become very important with the expected return to wet weather over the next seven to 10 days. Advanced fields are at Feekes 10.5.1 (flowering). This marks the end of the fungicide application window for many products to control leaf diseases and head scab. Fields that are not flowering yet may be nearing the end of the application window quickly. 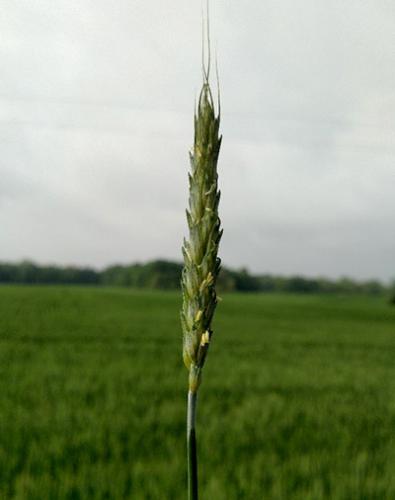 There is powdery mildew and Septoria in the lower canopy that should be monitored as we approach the fungicide cutoff window on later-planted wheat. 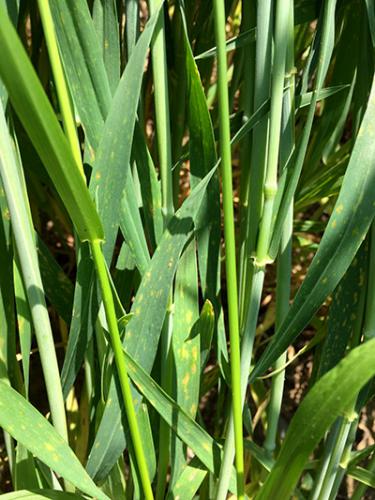