Field conditions across Southwest Michigan have been steadily improving for tillage and planting.

Rainfall skirted to the north of much of the Southwest region on Monday, May 5, which created an opportunity for planting to get into full swing. Rainfall totals since May 1 have averaged about 0.25 inches, and averaged 1.15 inches over the last two weeks. Field conditions across the region have been steadily improving for tillage and planting. Soil temperatures have moved into the mid-60s across several Michigan State University Enviro-weather stations in the Southwest region for highs. We are generally around one to two days behind normal growing degree day (GDD) base 50 accumulations across the region. Base 50 GDDs would normally accumulate at around 7.5 GDDs per day during the next five days, and 8.8 for the next five. Since May 1, we have averaged 33 GDDs at stations across the region. Corn takes approximately 115 GDDs to emerge.

The 6-10 and 8-14 day outlooks show below normal temperatures and near normal levels of precipitation for both periods. Unusually, windy conditions have caused challenges in allowing for applications of burndown herbicides and weed control in wheat.

Corn planting has kicked into high gear across the region. We anticipate that rainfall on Friday, May 9, will slow down progress. Conditions are good for planting with good soil moisture in most cases. Winter annual weed growth has begun to start in earnest in fields that have not been tilled or sprayed.

In the Purdue University Pest and Crop Newsletter, Christian Krupke and John Obermeyer report significant black cutworm moth flight activities in the southern and mid-portions of the state. It is possible that warm, southerly winds may bring moths to our area this weekend. Clean fields that do not have weed growth will not be at risk for egglaying. Growers should keep track of fields that have cover crops or significant annual weed growth from now forward and scout for clipping damage. It takes about 90 GDDs base 50 for egg hatch and 310 GDDs base 50 for clipping to begin after egglaying.

We also have been hearing reports of Asiatic garden beetle larvae white grubs impacting alfalfa seeding fields in sporadic areas across the region. Be on the lookout for white grubs that are being flipped up to the surface as you plant or work fields. Pay particular attention to high sandy knoll portions of fields.

Seed corn planting has begun this week. Growers may want to consider rapid growth of cover crops with the warmer conditions and make sure that herbicide applications are made to control before the growth gets rank. The predicted wide swing in temperatures always makes planting delays between male and female inbred lines a tricky proposition. At least so far, soil conditions have been favorable for timely planting.

Soybean planting is just getting underway. With cooler conditions in the forecast, keep in mind that the temperature of the first soil moisture that is imbibed into the seed can be important. Ideally, you should strive to plant into fields that have warm temperatures, even if temperatures slide back after the seed has taken up water.

Several early planted wheat fields that I watch are really beginning to look good right now. Advanced fields are in Feeke's growth stage 5 right now, rapidly approaching Feeke’s stage 6 when the first node becomes visible on the main plants. Feeke’s stage 6 is important because it is the cutoff for many herbicide programs like 2,4-D and dicamba.

While many fields look good, it is the later planted fields, especially where water stood, that are having real issues. Growers should look over stands, count plants and tillers, and make decisions based on what you think the yield potential is. Conditions range from excellent to poor. We have had some fields that will get taken out for sure. 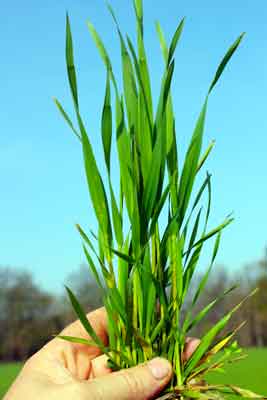 Winter annual weeds are becoming competitive with wheat at this time. Many growers are applying herbicides now before the critical Feeke’s stage 6 period. For information on herbicide programs that are available, see Michigan State University Extension bulletin E-434, “Weed Control Guide in Field and Forage Crops,” to review small grain herbicide options. Be sure to review Figure 1 on page 105 carefully to make sure that your crop has not advanced beyond the safe application window for the herbicide product you are considering applying.

On the pest front, Purdue University is reporting an uptick in armyworm moth catches at the Northeast Purdue Agricultural Center farm near Fort Wayne, Indiana. With the anticipated wind flow from thunderstorms, it is possible that we may have moth activity up into South Central Michigan this weekend. Armyworm moths love to lay eggs on grassy fields, which include cereal grain fields and cereal cover crops. Like with black cutworm, growers should note what fields have grass cover following this next weekend to prioritize scouting for armyworm activity, especially in seed corn.

After an extremely slow start, alfalfa is beginning to grow again quickly. Most stands across the region seem to have overwintered well, with the exception of where water was standing. The MSU Enviro-weather alfalfa weevil model for alfalfa weevil larvae tip feeding predicted activity to begin around May 5. The picture below was taken May 8 and shows that tip feeding is underway in this field located near Marcellus, Michigan. Right now, feeding is light, but fields should begin to be monitored for activity.

Growth is between 8-10 inches in height. We are currently at 351 GDDs base 41 since March 1. High quality first cutting dairy hay is usually targeted at 750 GDDs. 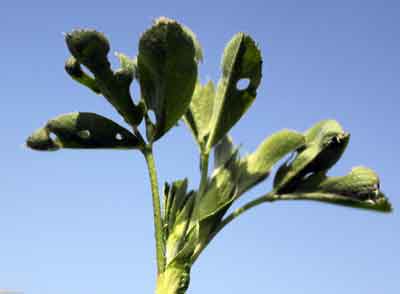 Potato planting continues at a rapid pace. Despite the slow start, dry conditions have been favorable for the planting of chipping varieties. I anticipate that planting is about three-fourths completed if not more by this time.