Dry enough to get back in the field – finally!

Southwest Michigan growers have been chomping at the bit to get field operations underway this spring. With the drier conditions, we have finally been able to get back into fields over the last week, especially on the sandier soils. Soil moisture conditions have dried to allow for tillage operations to resume, which really has set the stage for getting some corn and soybeans into the ground. While the precipitation has been favorable, the temperatures remain a different story. Temperatures have remained below normal for most of the past week with frost seen on the grass the morning of May 5.

The normal heat accumulation (Base 50 GDD’s) is around 9 per day for the next 10 days. Most of this past week, we have been averaging 4 to 5 GDD’s per day. If it takes 100 to 120 GDD’s for corn to emerge, you can see it will take quite a while to get the plants to spike in the current weather regime. While we are expecting a moderation in the cold temperatures in the region this weekend, the longer range forecast suggests the improvement may be short lived.

Precipitation levels over the last seven days range between 0.5 to 1.0 inches of precipitation, which has helped to get field operations underway. The 6 to 10 and 8 to 14 day outlooks still have us solidly in the above normal precipitation zone. For more specific information on the weather, please refer to Jeff Andresen’s article.

Remember, you can check the soil temperatures in your area on the web at Enviro-weather weather stations, and then by clicking on the “Advanced weather” tab along the top of the page.

Alfalfa growth has been slow but steady over the last week. Canopy height is now in the 6 to 8 inch range. We are still behind the expected beginning of alfalfa weevil early instar tip feeding by about 80 GDD’s (Base 48), so it may be another week or so before alfalfa weevil gets seriously underway. Alfalfa stands in our region seem to have avoided winter injury, probably because of the favorable snow pack over most of the coldest part of the winter. I have not seen much disease pressure on stands in Southwest Michigan. 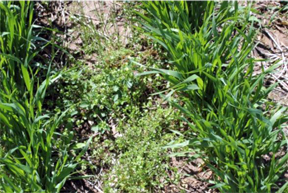 Wheat has also continued the slow but steady development path. Advanced fields are approaching Feekes’ Stage 6 (First Node Visible). This is the point when herbicide options become more limited (closing of the 2,4-D, Banvel window). For more information, read the MSU Herbicide recommendations for wheat. We do have winter annual weeds that are growing and could cause concerns in some fields. We continue to monitor for armyworm moth activity. Night moth flight activity has been on the increase, despite the cool nights. It is probable that last week’s strong push of southern air moved moths into southern Michigan. The drier conditions of late may have reduced the chance for powdery mildew to get established on the lower leaf canopy. The light soil field I scouted this week looked pretty clean to this point.

Corn and soybean planting is getting underway. Planter capacity has continually gone up in this area over the years, so favorable conditions will help producers to catch up relatively quickly. Soil moisture conditions from loamy sands to sand are excellent. Heavier soils are just getting dry enough to prep. Soils generally remain cold. Soil temperatures have been helped somewhat by the sunny weather, with highs at the 2-inch level in the low 60’s, and lows retreating to the upper 40’s to 50 at night. Winter annual weed growth remains rampant. Tillage operations underway now are getting the job done, but it will not take long for the weeds to get ahead of producers. Make sure to maintain adequate seed depth for corn and soybeans. Avoid planting into fields that are too wet, it can cause challenges with root growth and plant development that can last all season long.

There are lots of sandhill cranes out in fields this spring. If you have had problems with cranes pulling up corn as they walk down the row, consider a planter box treatment of Avipel. It really can reduce the size of the skip damage to a couple of feet per bird, which in crane country, can be really a significant improvement.

MSU and the Michigan Soybean Promotion Committee have stepped up research efforts on Sudden Death Syndrome (SDS) in soybeans. Since the disease was seen for the first time in many soybean fields in Michigan last year, a significant effort is being made to understand the disease and to look at a variety of ways to manage around challenges the pathogen poses. A longer term research effort is being conducted on a heavily infected field site near Decatur. Special thanks to Carl and Amy Druskovich for hosting this research project. A field day is being planned for late July, early August to discuss the preliminary results, and provide growers and agri-business professionals an opportunity to learn more about SDS. 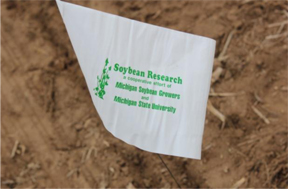 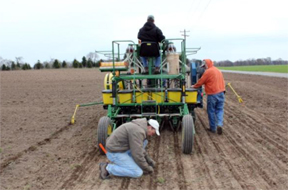