Warm and dry weather mean optimum conditions for planting operations and a time to catch up.

Temperatures are expected to increase according to the National Weather Service 6-10 day outlook (Photo 1) with highs into the lower 80s this week. According to Michigan State University state climatologist Jeff Andresen, the frost potential we saw last week was likely the last one for spring.

Most locations in the region received between 0.25 and 0.75 inch of rain last week—just enough to get seeds out of the ground for those able to plant earlier in the week, or to keep planters out of the field for a day or two. Rainfall totals so far this spring have been near normal for the region, as have heat units (Photo 2). There is little chance of rain in the coming week, although precipitation is expected to return according to the 8-14 day outlook.

It is not too early to start thinking about making sure your crop has sufficient moisture. MSU Extension educator Lyndon Kelley has timely advice on maintaining irrigation equipment and the possible need to irrigate a crop shortly after planting. The MSU irrigation scheduler (Photo 3) is one tool producers can use to help gauge soil moisture deficit (contact Bruce MacKellar for more information). 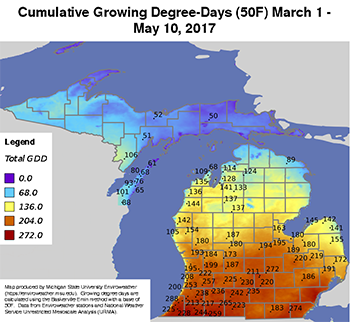 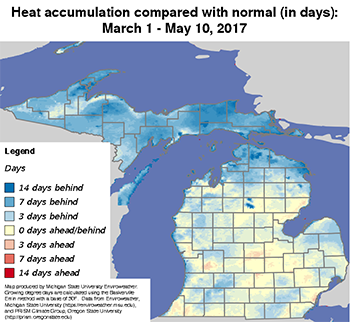 Photo 2. Heat accumulation base 50 F in Michigan in terms of number of GDDs (left/top) and compared with normal (in days, right/bottom) for March 1 through May 10, 2017. 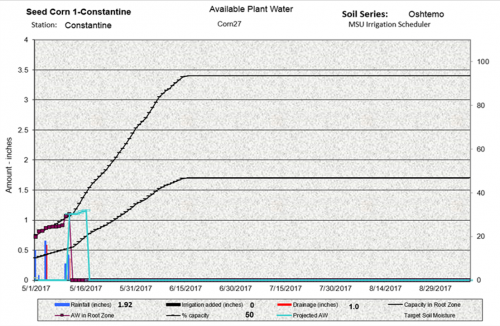 Photo 3. An example of the output from the MSU Irrigation Scheduler for a May 1 planting date for corn.

Growing degree-days (GDD) base 41 degrees Fahrenheit for alfalfa development are shown in Photo 4. Most alfalfa fields we have visited are in mid- or late vegetative development with no buds showing and stands roughly 12–16 inches tall. 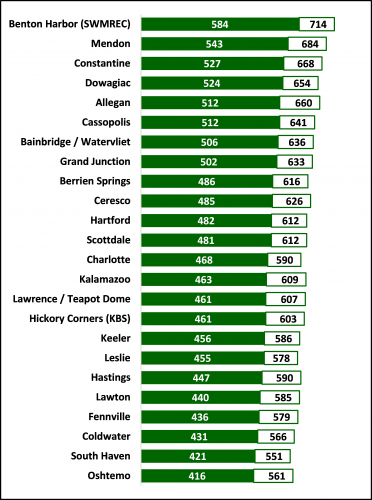 Photo 4. Current (solid bar, as of May 11) and forecasted (outlined bar, as of May 17) cumulative GDD base 41 F since March 1 for several Enviroweather stations in southwest and south-central Michigan.

A few plants were just entering early bud stage. Only minor alfalfa weevil feeding was seen (Photo 5). According to Purdue University’s Christian Krupke and John Obermeyer in the April 14, 2017, Pest & Crop Newsletter, immediate treatment with an insecticide is recommended for alfalfa once 400 GDD base 48 F has been reached and 50 percent tip feeding is observed. MSU Enviroweather data is tracked with base 41 F GDD, so there is not an exact correlation, but with all sites in the region having already surpassed 400 GDD base 41 F, scouting and treatment are recommended if feeding reaches that level. 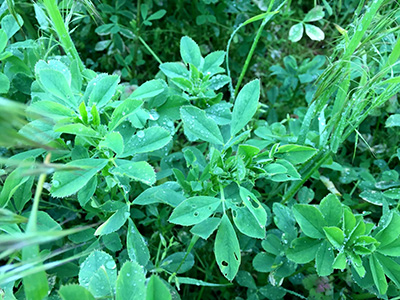 True armyworm and black cutworm trap counts for several locations in St. Joseph and Kalamazoo counties are shown in the table below. Purdue University traps saw an armyworm peak flight in northern Indiana the week of April 13–19 with very high counts the following week as well. Here in southern Michigan, we should consider our peak flight to be fairly close to this even though most of our traps did not necessarily see a peak at that time. According to one phenology model, armyworm eggs hatch after about 115 GDD base 50 F and larvae will feed for about 500 GDD before pupation.

Black cutworm captures in several northern Indiana counties, including Fulton, Elkhart, Kosciusko, Lake, LaPorte, St. Joseph, Starke and Whitley, were intensive the week of April 27–May 3, although some had intensive captures as early as the first week of April. Once eggs hatch after about 94 GDD base 50 F, 300 GDD are required for black cutworm to reach the fourth instar stage when cutting typically begins. Assuming a May 1 egg hatch, scouting for black cutworm feeding should begin in most locations in southern Michigan by late May (see Photo 6). 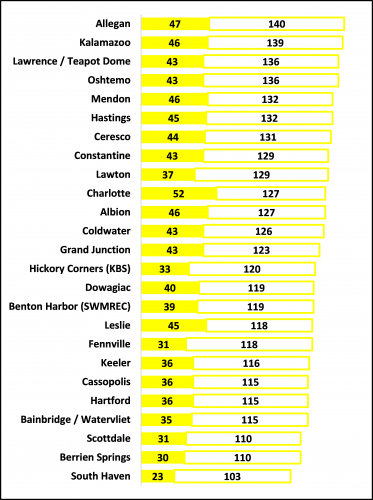 Photo 6. Current (solid bar, as of May 11) and forecasted (outlined bar, as of May 17) cumulative GDD base 50 F since May 1 for several Enviroweather stations in southwest and south-central Michigan.

Wheat fields in the region continue to progress nicely. Awns were just beginning to emerge in a few plants (Feeke’s 10.1) in more advanced fields while flag leaves are still emerging (Feeke’s 8) in slower-developing fields.

According to the USDA Crop Progress Report for May 7, 10 percent of corn was planted in Michigan, which is 17 percent behind the average, although here in the southwest/south central region, that number is likely closer to 30.

Soybean was only 1 percent planted as of May 7, but again that number is much higher in our region and should be approaching 50 percent by the end of this weekend.

Approximately 80 percent of potatoes have been planted, which is a little over a week behind schedule.