Wet conditions plague the 2017 growing season. Despite delays, growers are utilizing the narrow windows of opportunity to plant crops. The warm period following Mother’s Day weekend, May 14, allowed the crops that were planted to emerge quickly.

The MSU irrigation scheduler program set up for a field near Mendon, Michigan, with corn emerging around May 8 on an Oshtemo sandy loam shows that the crop received 210 growing degree-days (GDD) since emergence, and should be between the second and third leaf collar stage.

We received 3.24 inches of rainfall since emergence, with 2 inches of this expected to drain out of the root zone. The soil has been at or near saturation since May 20, which may also have set the stage for a denitrification event. With drier conditions expected over the first part of the holiday weekend, this should reduce this threat for nitrogen loss. 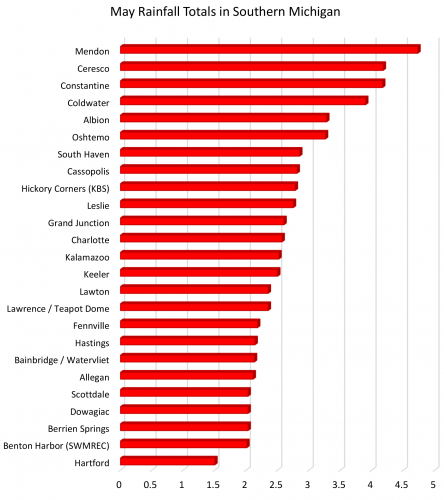 May rainfall totals in southern Michigan.

Pre-emergence sprays that have been able to be applied seem to be working well. Application windows have been limited. Keep an eye out for grass weeds if they are planning on a delayed pre-emergence program. Grasses that exceed 0.75 to an inch in height may not be controlled well by most pre-emergence grass products.

Early post-emergence programs may face rapidly growing weeds. Giant ragweed seems to be the most prevalent and the largest at this time. We continue to see more horseweed (marestail) in fields. A lot of it has been found to be Glyphosate and ALS inhibitor resistant in testing, and it has spread quickly around southwest Michigan over the last two years.

We have seen elevated levels of winter annual weeds in many fields across southwest Michigan this spring. Keep an eye out for black cutworm and armyworm in fields that had winter annuals or grass type covers actively growing in fields in the last week of April to early May.

Cutworm damage appears as plants clipped near the soil surface. Larvae will occasionally pull back these plants in underground channels or near the base of dirt clods. Cutworms, unlike armyworm, usually are nocturnal and are more easily spotted feeding in the early morning hours. The treatment threshold is 5 percent stand feeding. This pest is spotty, so keep an eye out for declining stands.

Armyworm feeding usually occurs along the edges of leaves, leaving a ragged edge appearance on impacted plants. Some herbicide programs (ALS inhibitors, HPPD inhibitors), organophosphate-containing rootworm insecticides and organophosphate-containing foliar insecticides can all utilize the same metabolic pathway for breakdown in your corn crop, allowing combinations of these chemicals to cause crop injury.

If you plan to treat for these insects with a foliar spray, review what chemicals have been applied to the field before you spray an organophosphate-containing product.

The wet weather has set the stage for slug feeding in some areas of southwest Michigan. We placed boards out in several fields and looked at the incidence of slugs underneath these as a way to estimate incidence. Our observations have shown that slugs are prevalent in not only fields that are adjacent to low areas, but also in more upland situations than normal this year.

Keep an eye out for slug feeding damage on emerged corn and soybeans. Damage appears as elongated areas of feeding on leaf surfaces. Remember, slugs do not respond to insecticides, but rather to bait applications. Early detection in fields affected can improve the potential for the treatment to work if damage levels warrant consideration.

We have had a couple of pounding rainfall events in many areas that soybeans have been planted but have not yet emerged. However, it has remained moist during this period, which has limited crusting at this time. Hopefully the beans will emerge before it dries out significantly. Those beans planted early on lighter soils have emerged well and look good.

Advanced fields have reached flowering this week. A good share of the fields have been sprayed with a fungicide. That is good because with this wet season, we probably are at an elevated risk for the development of fusarium head blight, especially on fields that were planted to corn/seed corn last season.

In looking at the Fusarium Head Blight Prediction Center from Pennsylvania State University, our risk as of May 25, 2017, does not look too great. However, it is time to look at wheat yield potential and leaf diseases, and make a final decision if wheat warrants a fungicide application.

Stripe rust has not been significant in fields that we have walked. We will want to keep an eye out for armyworm as grain fill progresses. The upper two leaves remain the most critical for yield protection.