It was getting hot and dry around southwest Michigan before June 25. While the heat continued, the dry conditions were “cured” by a line of severe thunderstorms on the evening of June 24, with heavy precipitation continuing in the area into mid-day on June 26. Locations that received the heaviest precipitation from these storms include portions of Cass, Kalamazoo, St. Joseph and Branch  counties in Southwest Michigan. National Weather Service Doppler radar indicated rainfall totals in excess of 5 to 6 inches in pockets of these counties. The fortunate thing is that many of these counties have coarse-textured soils, which will allow for faster drainage than areas further to the north. Even with sandy soils, many areas of fields have standing water, which combined with warm temperatures, can lead to crop stand losses and de-nitrification losses of fertilizer nitrogen. Hail was reported with some of the developing storms on the evening of June 25, but so far reports of damage from hail have been minimal. 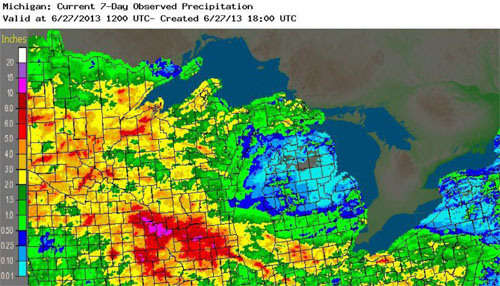 As growers begin to assess potential damage from flooding, some may opt to use pumps to remove standing water. Time is of the essence if this is an option as tissue loss occurs much more quickly when temperatures are warm. When temperatures are greater than 70 degrees Fahrenheit, corn usually can survive submersion for around 24 hours. Temperatures around 80 degrees can cut the period substantially. However, corn plants can survive being completely submerged for several hours without significant damage as long as the flooding conditions subside quickly following the event.

Estimating potential nitrogen losses can be much more challenging, and there is no way to know for sure how much N has been lost from individual fields. There are two different mechanisms at play. Denitrification is a biologically driven process where soil bacteria convert nitrate nitrogen to N2 gas which is lost to the atmosphere. This process takes a while to get ramped up. Soils that have been repeatedly exposed to wet conditions are much more likely to have higher populations of the bacteria, and are more likely to suffer N losses sooner than upland soils that have had little exposure to date. Temperature also plays a significant role. Michigan State University Extension soil fertility specialist Kurt Steinke says that air temperatures above 83 to 84 F can really crank the denitrification process into high gear. If soils remain near saturation for extended periods, denitrification losses could become a factor even on our irrigated sands. It is more likely that it will become a factor on the heavier soils in Kalamazoo and Calhoun counties where soils remained saturated for 48 hours or more.

Leaching losses, the downward movement of the negatively charged nitrate ions below the crop rooting zone, potentially could be a more widespread issue on our sandy soils. The majority of the sidedress N applications have been applied within the last two and half weeks. Potential N loss depends on the form of fertilizer N applied and the time of application. The nitrate portion of 28 percent UAN (25 percent) is available for leaching upon application. Some of the ammonia fraction should also have been converted, which means that 30 to 35 percent or more of the material applied could have been in the nitrate form.

Cation Exchange Capacity (CEC) can also play a role in N losses. Extremely sandy soils with low organic matter levels can potentially allow ammonium to leach through the soil profile. Soils with extremely low CEC values may have lost some of the applied nitrogen in this form through the profile. Soils with higher levels of organic matter, such as areas in the Mendon and Constantine Prairies, may have held more of the total Nitrogen applied than soils with lower organic matter levels. Losses on fields where anhydrous ammonia was applied should have converted less N to the nitrate form, especially if the application was made more recently. Nitrate leaching can be expected to move with the wetting front once the soil is filled to field capacity.

Steinke suggests that the rule of thumb is that each inch of rainfall may move the nitrate nitrogen 2 to 2.5 inches deep in a sandy soil profile. Fields that have low runoff risk, sandy textures and had 5 to 6 inches of rainfall from these events have potential to have moved a significant portion of the applied N towards the bottom of the rooting zone of the crop. This may be particularly true for seed corn production, in which we anticipate overall shallower rooting depths because of the limited plant canopy size.

So how do you know if you lost substantial N from leaching or denitrification? The simple truth is that there is not really going to be a good way to know for sure. Soil nitrate samples would likely have to be collected from 12 inches deep to around 24 to 30 inches to determine the N concentration still available to the corn. In practice, this is not an easy sample to collect. Tissue tests taken right now will reflect the nitrogen availability up until this point in the growing season rather than the nitrogen remaining in the profile. A more practical scenario would be to carefully monitor crop color and be prepared to apply additional N either through a pivot or with a high-boy applicator. Alternatively, you can estimate losses and use your best guess as to how much additional N will be needed by your crop. Remember, corn nitrogen demand closely follows the rapid corn growth phase, with the majority of nitrogen being taken up by the plant from V8-R1.

Additional N may be required:
Consider 30 to 60 pounds of N per acre for fields where urea or 28 percent UAN was applied one to two weeks prior, or anhydrous ammonia was applied three to four weeks prior, to excessive rain, especially if:

Additional N likely NOT required:
Fields where N loss is estimated to be less than 30 pounds of N per acre and the projected optimum N rate or higher was used initially. For example:

Estimating potential nitrogen loss in your fields will not be an easy task and most likely will not be the same for every field in your operation. We hope that this discussion will help you to better understand the processes by which nitrogen can be potentially lost, and provide some guidance as to how make decisions on whether to re-apply nitrogen on your fields, if necessary.

Purdue has an excellent Bulletin title “Response of Corn to Late-season Nitrogen Application,” which highlights research results from late season application of nitrogen on commercial corn.

Getting back on track with irrigation scheduling

While there may not be a lot of upside in getting 5 to 8 inches of rainfall pounding the crop early in the growing season, there may be one small benefit to irrigators. For those who utilize irrigation scheduling, one of the hardest things to know for sure is what the soil moisture level is actually at the start of scheduling. I think it is safe to assume that fields in our area were at field capacity on the morning of June 26.