Last week was cool with highs in the 50s and 60s and lows in the 30s and 40s. Rain Monday and Tuesday, April 28-29, will be followed by warm temperatures on Tuesday, but the rest of the week will be cool with temperatures in the 50s and lows in the 30s. Most fruit plants are past bud break with exposed leaf tissue, so rains can be infection periods for early season diseases. Berrien County, in the extreme southwest, is more advanced in plant development than areas to the north and east.

Rainfall across the region over the last two weeks has been between 0.8 and 1 inch. Soils are drying and a lot of tree planting took place last week. Comparing the growing degree days (GDD) for the last five years at the Southwest Michigan Research and Extension Center shows that we continue to be very similar to last year (2013).

There is a good amount of orchard renewal going on with old orchards removed during last winter and new orchards being planted in the last two weeks. Many fruit crops will be hurt by temperatures in the mid- to upper 20s with severe damage if the temperature drops below 28 degrees Fahrenheit during bloom. We are at least halfway through the normal spring frost freeze season as fruit buds have developed slowly. Michigan State University Extension has developed a picture guide of critical spring temperatures in tree fruit.

Growers have applied copper to stone fruits and apples. Early season oil and insecticide sprays for San Jose scale, mites and aphids are a good option if weather permits. Oil sprays should not be applied if there is a danger of a freeze in the following two days.

Apricots are in bloom. Temperatures have been below the optimum for brown rot infection of blossoms, but infection is still possible with wetting periods over 12 hours.

Peach fruit buds are at red calyx for the non-showy types and first pink for peaches with showy blooms. Most of the fruit buds killed by cold winter temperatures have turned dark and dropped and it is easier to assess the crop potential. Growers are continuing their peach pruning.

Examine last year’s growth for evidence of San Jose scale infestations. Copper applications can suppress bacterial spot by reducing bacterial populations that damage leaves and fruit after bloom. See “Management of bacterial spot on peaches and nectarines” for more details. Be careful to not over-apply copper. Reapplication of copper is not needed until after significant amounts have been removed by rainfall.

In cherries, sweet cherry buds are at tight cluster to first white. We will probably see the first blooms by the weekend or early next week. Many buds have swollen, but do not appear to be opening; these buds do not have viable flowers in them. We have a report of trunk splitting in Southern Berrien County due to winter cold.

Tart cherry buds are at tight cluster in Berrien County, but still at green tip in Van Buren County. Montmorency cherries are behind Balaton, whose flower buds have burst. Many of these Balaton buds have only one or no flowers at all. There is still time to apply copper to reduce bacterial canker in tart cherries. 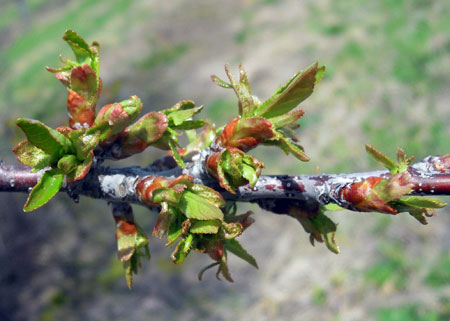 Balaton cherry fruit buds have opened, but there are no developing flower buds inside. The flower buds were killed by winter cold. Photo credit: Mark Longstroth, MSU Extension

Japanese plums are at white bud and will open soon. European plum buds are at tight cluster. Low rate copper sprays now can help suppress bacterial spot symptoms after bloom. Black knot infections occur on the current season’s shoot growth. The control window is from first green buds until active shoot growth slows down in early to mid-summer. The most important fungicide treatment time for this disease is from first color on flower buds until approximately three weeks later. Brown rot treatment is usually aimed at full bloom if a single application is used.

Apples do not show any sign of having suffered from the winter. Bud development ranges from 0.5 inch green to tight cluster. Current forecasts and GDD models indicate apple bloom could start early next week. Apple scab ascospores were caught during rains beginning April 14. Apples were barely at green tip for the rain which was a scab infection period throughout the Southwestern Michigan area. Copper applications should not be used for fresh market apples once the flowers buds are exposed (e.g., tight cluster) to avoid phytotoxicity and russetting of the fruit finish.

The most important period for control of powdery mildew starts at pink and continues until terminal bud set. Scout orchards for infested terminal growth from last year’s powdery mildew infections and cut off these infections when seen. At the same time, look for last year’s fireblight infection and remove affected branches that are greater than 0.5 inch in diameter.

Pears are at tight cluster. Pear scab control is needed as susceptible green tissue emerges. Pear psylla management begins at the white bud stage if it was not done with oil earlier.

We are seeing the impact of winter cold more and more as the season starts and bud growth is slow to start. Much of Southwest Michigan suffered its coldest temperatures in early January with temperatures below -10 F across the region and many lows near -20 F. This is well into the range where we would expect to see damage in small fruit. This was much earlier than other parts of Michigan that saw extreme cold later in the season after much of Lake Michigan was covered with ice (see “Winter weather update for 2013-2014”). Differences in growth between varieties that were able to withstand the cold and those that suffered damage are becoming apparent and will become much more noticeable as growth continues.

Grapes are proceeding slowly. Early bud swell is underway and some vines are still “bleeding” from pruning cuts. In general, ‘Concord’ shows little damage from the winter cold. ‘Niagara’ is much more affected with more damage, especially in poorer sites. Vinifera wine grapes are showing a lot of damage from the winter with the more winter-tender reds showing more damage than white fruited varieties that are generally more winter-hardy (see “Pruning severely winter-damaged grapevines in Michigan”).

Damage will become more apparent as buds break and green shoot growth begins. At the time flower clusters are exposed, it will be easier to estimate crop and loss. Grapes require warmer temperatures than other Michigan fruits. Grapes use a higher base temperature (50 F) than other fruits which use 45 F. GDD accumulation also starts later on April 1.

Given the cool spring that is expected to continue, we expect grape growth to continue to be slow until we get more normal highs in the 60s and lows in the 40s or higher. There is still time for dormant sprays in grapes, an application of lime sulfur, sulfur or copper to reduce inoculum of phomopsis, anthracnose, black rot powdery and downy mildew. As buds develop, climbing cutworms and grape flea beetles will be the insect pests to watch for. Growers have generally finished pruning and tying and have applied preemergence herbicides.

Blueberry flower buds are bursting in early varieties. Southern areas in Berrien County are generally more advanced. In Van Buren County, we are at green tip in the leaf buds and leaf tissue is emerging in early varieties. Green leaf tissue is out in Berrien County. Many fields show poor growth and a light fruit bud set as a result of last year’s heavy crop. In these fields, dead and weak wood on older shoots is common. Fields that were heavily pruned a year ago generally show less of this poor condition.

Winter injury to blueberries is becoming easier to see. In some cases, last year’s vegetative shoot tips are withered and terminal fruit buds are dead and shriveled. In many plantings, damage becomes apparent about 12 inches above the ground where the buds were exposed above the snow during the cold winter. Buds at the base of the bush and at the top are swollen and beginning to burst. Flower buds at the 1- to 2-foot height or higher are swollen, but behind those higher in the bush that are moving normally and have burst. In younger plantings, a significant portion of the bearing surface has been affected.

As leaf tissue emerges, mummy berry infections are possible. Growers should be scouting for mummy berry apothecia, also called mushrooms or trumpets. Mummies have been found in wet sites. Spores are generally released under dry conditions, not during rains. Free water is required for the spores to germinate and begin infection. See the article “Understanding mummy berry shoot strikes” for more information on the infection conditions necessary for mummy berry shoot strike, including temperature and wetness requirements. Freezes increase the susceptibility of tissues to infection, so protectant materials should be applied before freezes while systemic materials should be applied quickly after a freeze.

Brambles are showing more winter injury as growth begins. Early varieties have leaves unfolding while most varieties have about 0.25 inch of the leaves out of the bud. Winter damage to overwintering canes is severe in many plantings. Damage is most severe in thornless blackberries, then red raspberries, with black raspberries the least affected. New primocanes are emerging from the ground. Fall-bearing raspberries have been mowed. Many plantings have been treated with lime sulfur for anthracnose. High-tunnel raspberries are more advanced than raspberries in the field with new growth of 2-6 inches. 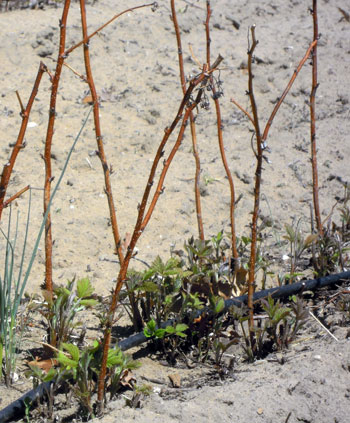 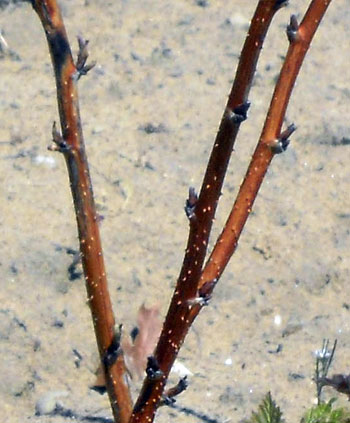 Red raspberry planting. About half the buds on the floricanes are showing movement with about 0.25 inch of new growth. New primocanes are clearly visible with reddish new leaves on the ground in the row. Photo credits: Mark Longstroth, MSU Extension

Our next weekly Monday fruit IPM meeting is May 5 at Fruit Acres Farms, 3452 Friday Rd., Coloma, MI at 5 p.m. Michigan pesticide applicator recertification credits will be given for these meetings.