Strawberry harvest has begun, grapes are blooming, cherries are coloring and birds are feasting.

The weather last week was warm. Highs were near 80 and lows in the 40s and 50s. This was about 10 degrees cooler than the previous week. Showers on Wednesday, June 4, and Sunday, June 8, were widespread, most areas receiving over an inch of rain. A cold front moved across the region Wednesday and brought showers during the day. Another front early Sunday morning brought heavy showers during the early morning.

Soils are generally moist now, but sandy soils will dry out quickly in these long days and many growers are already irrigating. The evapotranspiration (ET) is about 0.18 to 0.2 inches per day and the total ET for the last two weeks is over 2 inches. Soils were warm with temperatures in the 60s.

This week will be cooler. High temperatures will remain in the 70s. Rain is forecast for Wednesday, June 11, with the possibility of rain most of the week. Last week we picked up about 160 growing degree days (GDD) base 42 and 110 base 50. Allegan County in the northern part of the region is still lagging about a week behind Berrien County in the south. GDD accumulation is only a few days behind our long-term average. We are close to last year, 2013, but two weeks behind 2010 and 2012. See the GDDs for the last five years at Bainbridge, Michigan in northern Berrien County. The long-term forecast for the month of June is cooler than normal.

Growers planning significant numbers of tree removal due to cold damage should contact the USDA Farm Service Agency (FSA) office serving their county first for pre-inspection, which is required for the USDA Tree Assistance Program. Poor pollination conditions and the hot weather at the end of May resulted in a significant June drop. Hand-thinning of apples, peaches and pears has begun. There continues to be ongoing, low level reports of brown marmorated stink bug (BMSB), mainly in overwintering sites in buildings. Growers are protecting against direct fruit pests such as plum curculio and codling moth now that fruit are large enough to attract attention.

Apricots are over an inch in diameter with hard pits. Apricot foliage generally looks good.

Peach fruit are 22 to 26 millimeters in diameter with continued fruit drop. Crop potential varies across the region with a good crop in good peach sites close to Lake Michigan. Trunk gumming is noticeable on trees damaged by winter cold. Tip dieback of shoot tips due to oriental fruit moth larvae entries have been reported over the past week in several orchards in the Southwest and West Central region. This is approximately 30 days from the first report of moth catch by the Trevor Nichols Research Center near Fennville, Michigan.

Both greater peach tree borer  and lesser peach tree borer adults have been caught for the last two weeks. Borers require trunk sprays or pheromone disruption. Where peach scab was a problem last year, fungicides such as Captan, sulfur or Ziram can be used to manage the disease. More bacterial spot is showing up on leaves of susceptible cultivars, but not yet on fruit. Peach fruit are most susceptible to bacterial spot infection from shuck split to pit hardening which is still a few weeks off for Berrien County. Peach fruit with susceptibility to rusty spot disease should be protected from shuck split to pit hardening.

In cherries, few fresh plum curculio egglaying scars were found. Growers also need to protect against cherry leaf spot. Birds are congregating in cherry orchards and feeding on the fruit. With a light crop, birds can have a significant impact. With a relatively fixed number of birds per mile, they become more of a nuisance when the crop is light. 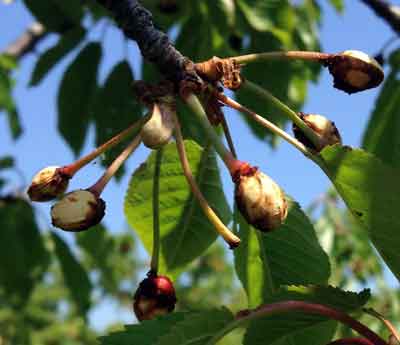 Birds ate the flesh of these cherries and left the pits on the tree at the Southwest Michigan Research and Extension Center. Photo credit: Bill Shane, MSU Extension

Sweet cherries are 16-18 millimeters in diameter. The pits are hard and there is some drop of early coloring fruit. Foliage is relatively free of bacterial canker and cherry leaf spot symptoms. Growers need to protect against cherry leaf spot. Sweet cherry fruit is always susceptible to brown rot and growers are reminded that Michigan State University Extension has found brown rot resistance to FRAC code 11 fungicides (strobilurins) in the area.

Tart cherries are 12-14 millimeters in diameter and the pits are hardening. Fruit damaged earlier by plum curculio are dropping. The crop looks normal to light for Southwest Michigan. Cherry leaf spot lesions are easy to find in some orchards. Growers should be applying sprays to control cherry leaf spot and plum curculio. American plum borer adults have been caught in good numbers over the past three weeks in the Trevor Nichols Research Center trap line. Several orchards in Southwest Michigan were found in 2013 to have poor foliage due to American plum borer burrowing under the bark in the lower trunk.

Japanese plums are 16-20 millimeters in diameter. European plums are 17 millimeters. Fruit drop has been heavy in some varieties. Black knot, plum curculio and American plum borer are the primary pest concerns.

Apple fruit range from 1-1.25 inches in diameter. Crop is generally light with a heavy drop over the last two weeks in some orchards. Oriental fruit moth trap catch has declined and codling moth catches are still relatively high. Apple scab ascospore catch still continues at a low level. Given the rainy forecast for this week, growers should continue to protect their crop and foliage until spore counts drop to zero or near-zero. Ascospore release typically continues into early June. Apple scab symptoms are easily found in abandoned orchards and growers should be scouting their orchards for lesions on the leaves and fruit. If you find scab symptoms, you need to continue with a fungicide program to control secondary apple. Apple fruit are susceptible to scab infection until they form a waxy coat when they are about the size of walnuts.

Fire blight symptoms from blossom infections continue to develop in many Southwest Michigan apple orchards. These infections probably took place on May 11 or 13. Spotted tentiform leafminer numbers are declining. Growers and scouts should have traps out for obliquebanded leafroller.

Pear fruit are 16 millimeters or larger in diameter. Natural fruit drop is continuing. Pear scab and fire blight are ongoing concerns. Pear psylla can be found in all stages of development.

Fruit are moving rapidly in the summer weather.

Grape bloom has begun. Shoots are 12-24 inches. Winter-injured vines have shoots growing from the cordons and the trunk. Minimal pruning should be done on severely damaged vines, allowing the vigor of the plant to be spread over multiple growing points rather than concentrated into one or two very vigorous shoots, which would make poor replacement trunks or arms. Generally, juice grapes and hybrid wine grapes look good, but most vinifera vines were severely impacted by the winter cold.

Southwest Michigan GDD summary for grapes from April 1 to June 8, 2014

The bloom period is critical for disease control in grapes. Sprays to control black rot phomopsis, powdery mildew and downy mildew are applied during bloom. Materials to control black rot are often included in the final pre-bloom spray. Grape berry moth biofix was set at May 29 in Berrien County and June 2 in Van Buren County. The first grape berry moth larvae were found feeding in clusters. Treatment for the first generation of this pest begins after bloom when egglaying begins and insecticides are sometimes included in post-bloom sprays. MSU Extension recommends that grower target the second and third generations of grape berry moth. Rose chafers are out and feeding. Some grower may wish to target this pest which feeds on grape flowers.

Blueberry post-bloom pesticide applications are focused on preventing anthracnose fruit rot and controlling fruitworms in the green fruit. Most growers applied sprays to control cranberry fruitworms, and cherry fruitworm treatment window was the end of bloom. Winter injury has become very apparent in many fields. There is vigorous growth in the lower half of the bush and poor growth in the upper half. In the upper areas of the bush, leaf buds were damaged or killed by the winter. This resulted in many shoots with small fruit and no leaves. This fruit will certainly fall.

In some fields, a second wave of bloom has opened on shoots with delayed growth. We are seeing good vegetative growth from the base and middle of the bush. Higher on the bush, most shoots have only a few small leaves and little shoot growth. Damage is generally more site specific across the region and less focused on specific varieties. In different areas, growers often give different varieties as most affected. The crop is very variable around the state with much less injury in the northern growing area and more injury to the south. 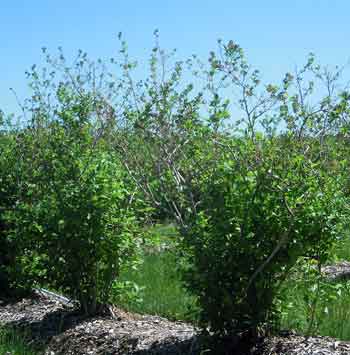 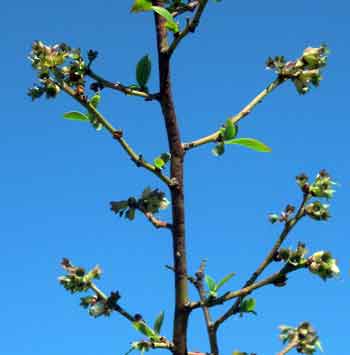 Strawberry harvest began last week in fields manipulated to advance growth such as floating row coverers early in the spring until bloom. Some growers are reporting some damage from winter. General strawberry harvest is just beginning and the cool weather forecast should be good for stretching the harvest.

Bramble bloom is ending and green fruit can be found on floricanes that survived the winter. Primocane growth from the ground is vigorous. Leafroller and sawfly damage can be found.

Cranberries are greening up and shoot growth has begun.

The next weekly Monday fruit IPM meeting is June 16 at Fruit Acres Farms, at 3452 Friday Rd., Coloma, MI at 5 p.m. Two Michigan restricted use pesticide (RUP) applicator recertification credits will be given for these meetings.

A blueberry meeting is scheduled for the evening of Wednesday, June 18, in Van Buren County. Details will be released as soon as we can secure a site.

Growers who wish to get rid of unused pesticides can use the MDARD’s Clean Sweep Program. There is a Clean Sweep collection in Berrien County on June 25, but growers need to register by June 11 to participate.