Plants continued to develop rapidly with last week’s warm, summer-like weather. Rain and cooler weather was the story for the weekend.

Last week began very warm with highs in the 70s and 80s. Strong thunderstorms accompanied the passage of a cold front Wednesday night, May 9, which dropped temperatures 20 degrees Fahrenheit overnight. Highs were only in the 50s and 60s for the rest of the week. A stationary frontal system parked over southern Michigan over the weekend. Storms moved across the region from west to east. Rain showers on Thursday, Friday and Saturday dropped several inches of rain. This was a serious disease infection for many diseases.

Storms moved across the region on Monday, May 14, and dropped several more inches of rain and caused local flooding. The total precipitation for the week was 3 to 4 inches of rain. Soils are saturated.

Warmer, wet weather is forecast for the beginning of the week. Highs will be in the 70s and lows in the 50s. We are about a less than a week behind normal. Soils are wet and soil temperatures are in the 60s. Recent southwest region-wide warm temperatures have helped to equalize the heat unit accumulation south to north.

Stone fruit moved quickly through bloom last week. Rain and warm temperatures in the last half of bloom and early petal fall compelled some growers to apply brown rot fungicides. Use care when applying timing fungicide and bactericide applications during bloom to control disease. To protect foraging bees, apply sprays during the early morning and evening to reduce bee exposure to sprays. Hail was reported from several areas during the weekend storms and Monday morning. There was little reported damage to the crops, but concern about increased risk from bacterial diseases due to leaf tattering. 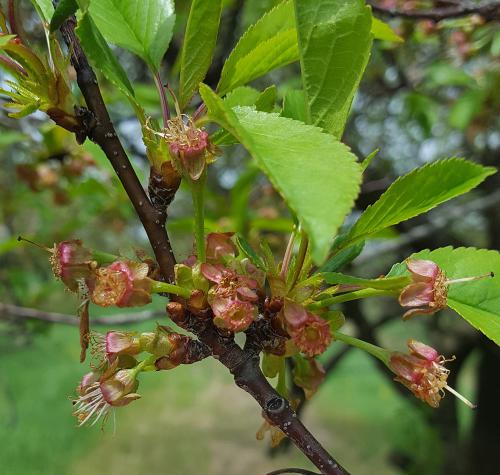 Stone fruit are in the shuck. Flowers that were pollinated and fertilized will grow and non-pollinated flowers will soon fall off. The leaves on this tart cherry tree are susceptible to cherry leaf spot.

Apricot fruit has emerged from the shuck.

Peach and nectarine bloom is ending and fruit is in the shuck. Conditions this year resulted very few peach leaf curl infection periods. The first favorable infection period at the Southwest Michigan Research and Extension Center was May 11. By then, most growers had applied fungicides for brown rot, which also control peach leaf curl. Until recently, temperatures were too cool for significant bacterial spot. Bacterial spot is favored by wet and warm conditions. Low levels of copper can suppress bacterial populations. Leaves should be monitored for copper phytotoxicity symptoms.

We are catching oriental fruit moth. There was a significant jump in trap catch numbers last week. We are using May 4 as the biofix (first sustained catch) for oriental fruit moth based on the Trevor Nichols Research Center trap line. General guidelines call for insecticides with ovicidal action at approximately 100 GDD42 after biofix, and approximately 170 GDD42 for insecticides with larvicidal activity. In Berrien County, both will occur this week.

Plums are in the shuck. Fungicide treatment for black knot should continue.

Apples are blooming. Early varieties (Zestar, Idared, Macs) were at full bloom on May 9. The cool second half of the week slowed down bloom, with the majority of varieties at or nearly at full bloom by Monday, May 14. Late varieties such as Rome are at king bloom now (May 15). The numerous rains late last week were an apple scab infection for most orchards in southwest Michigan. Symptoms from the May 2 infection period should be showing up this week in abandoned apple trees. 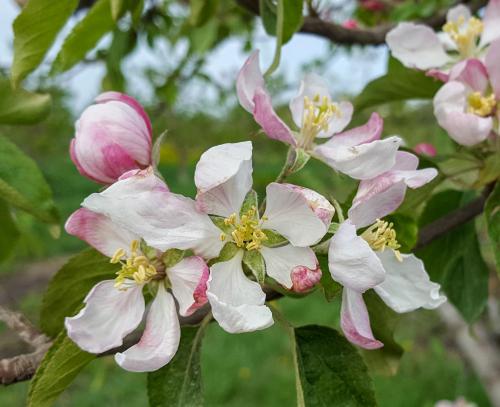 In grapes, Concord and Niagara juice grapes have about 3 inches of shoot growth and two leaves are out. Vinifera and hybrid grapes buds develop more slowly. Many hybrids are past bud burst and vinifera are at late swell or bud burst. We are at the beginning of shoot growth as the flower clusters are first exposed. This early shoot growth (1 to 4 inches) is a critical time for grape disease control (see “Early season vineyard disease management”). This is a critical time for controlling powdery mildew, phomopsis, black rot and other diseases.

Grape flea beetles are out but most grapes are past the susceptible bud swell stage in southwest Michigan. Climbing cutworm risk is low as well. Later growing varieties are still at risk. These pests are a concern mainly during bud swell and when the grapes spend a long time in this phase due to cooler weather. Grape berry moth were trapped last week, but there is no reason to apply controls at this time.

Blueberry bloom has begun. Bluetta, one of the first varieties to bloom, is blooming. Bluecrop is at late pink bud and the first flowers are opening. Most varieties are at late pink bud. With the warm weather forecast this week, bloom should open quickly. Growers are moving bees into their blueberry fields. Shoots and leaves are expanding rapidly.

In bloom, the disease focus shifts to controlling the blossom blight phase of mummy berry. The flower is most susceptible immediately after it opens. Sprays to protect the fruit are targeted for early and mid-bloom.

Many fields are flooded from all the rain in the past few days. Many bloom sprays will need to be applied by air. Use care when applying fungicides during bloom. While fungicides are generally considered safe for bees (they do not kill individual bees), research indicates that fungicides do impact the health of the beehive when fungicides are carried back to the hive. Sprays should be applied at night or in the early morning, or late in the day. Avoid spraying during the middle of the day when bees are actively foraging on the blossoms.

Cranberry and cherry fruitworm flight begins during bloom. Fruitworm traps should be out now to help establish biofix and treatment for these pests. 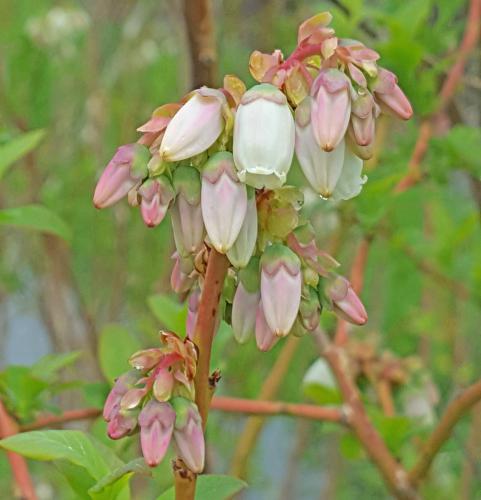 First bloom in Bluecrop. The warm weather this week should have blueberries opening up all across west Michigan.

Strawberries are blooming. This week, conditions should be good for pollination. 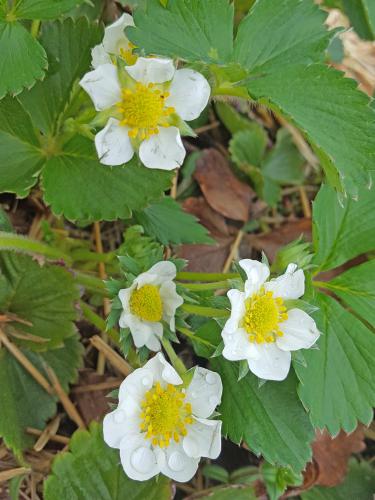 Bramble shoots are expanding. Leaves are out and flower buds are visible. Primocanes are emerging from the soil. Most primocanes are only a couple inches tall.

Cranberries are greening up and terminal bud are swollen. We expect shoot growth to begin this week.

Fields and fruit plantings are soggy due to recent rains. Weed populations are starting to take off.

The next Monday fruit IPM meetings is May 21 at Fruit Acres Farms, 3452 Friday Rd, Coloma, MI at 5 p.m. Two Michigan RUP applicator recertification credits are available at these meetings. There is no meeting scheduled for May 28, Memorial Day.