Why do we still use a 250 soybean aphid threshold?

A recent YouTube video out of the western Corn Belt recommended controlling low populations of aphids because (according to the video) their feeding creates leaky wounds and provides entry points for fungal pathogens. The video says that a 250 threshold for soybean aphids is out of date, and should be lowered because the market price of soybean has increased in the last decade. In their farm operation, the hosts spray “real early” and “every single year” for aphids because at “five or 10 aphids per plant, I’m pulling the trigger.” And “it’s very, very inexpensive to do this” at only “2 bucks” for a full rate of insecticide.

As most of you know, I’ve worked with soybean aphids since Aug. 3, 2000, when I saw my first infested stem in Decatur, Michigan. I’ve spent many hours of my life counting aphids on soybean plants and making spray recommendations. Before that, I spent my graduate career pondering aphids infesting potato in the Red River Valley of Minnesota and North Dakota. Then for my post-doc, I worked on aphid-vectored viruses of vine crops at an ag research facility in Israel. There is a reason I am called the “Aphid Queen” – I really like aphids! I am ignorant about a lot of things in field crops production, but aphids aren’t one of them.

Now let’s explore the soybean aphid threshold. It’s true that after soybean aphids were found in 2000, university entomologists “guestimated” an action threshold of 250 soybean aphids per plant based on preliminary data and experience with aphids in other crops. Eventually, a multi-year, multi-state (including Michigan) study amassed data to relate aphid numbers to actual yield loss. This study was published in 2007. Once the damage-yield relationship equation was known, entomologists could calculate the following:

The bottom line is that it takes hundreds of soybean aphids per plant to do measurable damage, and even more to cause economic damage. The threshold of 250 soybean aphids per plant is stuck in the minds of growers, so entomologists continue to use it. However, it is on the conservative side (erring towards spraying rather than not), and if you have ready access to a sprayer, you can wait until the population is nearly double before spraying.

Why wait? To allow biological control to do its thing. Below is a graph of the soybean aphid population at a Michigan State University research farm in Saginaw County. After 2005, something changed, and aphid populations no longer had a boom and bust cycle. Instead, for those of us on the eastern Fringe, soybean aphids are only a sporadic problem in an occasional field (double-cropped or potassium deficient). What changed? 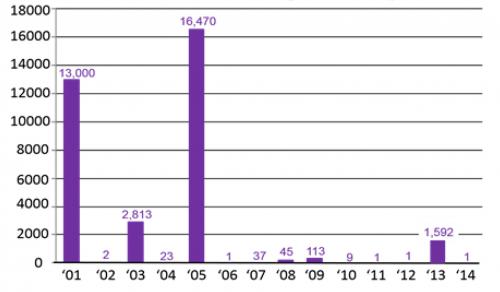 One big change in Michigan soybean fields in the last decade is in the natural enemy community. Fungal pathogens and lady bugs always attacked soybean aphids, but parasitoids – the tiny wasps that specialize in depositing an egg into an aphid host – were noticeably absent. Now soybean aphid parasitism is relatively common in Michigan fields, even early in the season when aphids first colonize soybeans. Parasitoids add an important piece to the biocontrol puzzle; it simply took a few years for native parasitoids to recognize and attack soybean aphids. In contrast, at a meeting a few years ago, a colleague from Iowa State University exclaimed, “You have parasitoids in Michigan?” And Tilmon, who used to work in South Dakota, told me, “We scoured the place every year for natural enemies and always found plenty of predators, but only very rarely a parasitoid mummy.” Higher parasitism rates in the eastern states could be related to greater crop and landscape diversity compared to the western Corn Belt. However, I suspect it could also be related to differing attitudes about threshold and insecticide use, since OPs and pyrethroids sprayed for soybean aphids kill natural enemies and disrupt biocontrol.

What happens when you spray at five to 10 soybean aphids per plant, far below the soybean aphid damage boundary? You probably treat every year, as the video suggests. Unfortunately, the “cheap” cost of spraying early disregards longer-term, region-wide outcomes, case in point the development of resistance. In Minnesota and surrounding states, soybean aphids are now less susceptible to the pyrethroids lambda cyhalothrin (e.g., Warrior) and bifenthrin (Hero, Tundra, many others). In a symposium I attended this winter, an entomologist discussing field failures in Minnesota said that spraying pyrethroids was “like applying water on the aphid population.” Spider mite resistance to chlorpyrifos (e.g., Lorsban) is also showing up in the same region. Entomologists believe this resistance is a by-product of unnecessary aphid sprays, plus the spiking of pyrethroids with chlorpyrifos to improve aphid control.

So it turns out we actually know what happens when aphid management is done using absurdly low guidelines with no basis in biology and economics. Frequent sprays likely reduced the impact of natural enemies, further benefiting aphids. Frequent spraying eventually selected for pyrethroid-resistant soybean aphid and flared spider mite. To improve control, tank-mixes of OPs with pyrethroids then selected for chlorpyrifos-resistant mites. In contrast, in the Great Lakes region, many growers still follow university recommendations and wait for soybean aphid populations to increase above the perfectly-reasonable 250 threshold before pulling the trigger. As a result, the natural enemy population has diversified to include significant rates of parasitism, and the cycle of soybean aphid outbreaks was broken. Thus far, the susceptibility of soybean aphid and spider mite to OPs and pyrethroids has been maintained in this region, so these insecticides will work when actually needed.

If you went through the soybean aphid outbreaks in 2003 and 2005 in Michigan, you had first-hand experience with some of the highest aphid numbers on soybean in the U.S., and more recently some of the “best” aphid years. I leave it to you to decide whether managing populations of five to 10 soybean aphids per plant makes any biological and economic sense.

Dr. DiFonzo’s work is funded in part by MSU’s AgBioResearch.