High seed costs have encouraged Michigan soybean producers to cooperate in on-farm research trials with the goal of identifying the most profitable planting populations.

The STARS (Strip Testing at Regional Sites) project provides Michigan soybean producers with a statistically sound method for evaluating the yield and income benefits of new products and management practices. Michigan soybean producers identified planting populations as one of the management practices they wanted to evaluate in on-farm replicated strip trials in 2009 and 2010. The cooperating producers evaluated three planting populations (120,000, 160,000 and 200,000 seeds per acre) at six sites in 2009 and 10 sites in 2010. Each population was replicated four times. The 2009 and 2010 planting population trial results are summarized and presented in Figure 1. 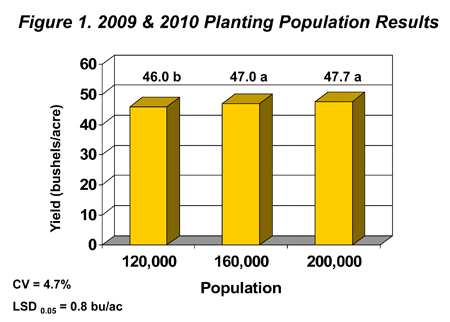 In summary, planting population did significantly affect soybean yields and profitability in 2009 and 2010. It may surprise some that the lowest population was the most profitable when the results from all locations and years were combined. Actually, this is not so surprising considering that half of the trials were planted in 30-inch rows. Several factors (row spacing, planting date and seed treatments) affect planting populations. Of these, row spacing makes the biggest difference (see Table 2).

Producers should increase their planting rates by approximately 10% when planting in April. When planting after mid-June, producers should also increase planting populations and plant in narrow rows to compensate for the small plants associated with later planting dates. Recent research conducted in Ontario showed that plant stand counts were nearly 7% higher when seed treated with Cruiser Maxx was planted suggesting that planting populations could be reduced when using treated seed. However, work conducted in Michigan showed that the seed-applied treatments were effective for early planted soybeans (April), but not for soybeans planted in May or later.

Corn and soybeans will be competing for irrigation this year