Soybean sudden death syndrome continues to spread in Michigan and was confirmed in 2016 for the first time in Livingston County.

Heavy rainfalls in many parts of Michigan this August 2016 led to severe soybean sudden death syndrome (SDS) symptoms developing in many fields. This disease continues to spread in the state and was confirmed this year for the first time in Livingston county.

Soybean sudden death syndrome (SDS) is caused by the soilborne fungus Fusarium virguliforme. Foliar symptoms of the disease initiate as yellow spots which progress to general yellowing and death of leaf material between the veins. Typically, the disease shows up during late soybean reproductive stages in the month of August, but can be seen earlier. Leaves of infected plants can prematurely drop and pods can be aborted. However, the hidden side of this disease is below ground. The SDS fungus infects soybean roots after seed germination and can cause root rot. The fungus never moves above the soil line, but produces a toxin that the plant takes up into the foliage causing leaf symptoms. Foliar symptoms are more likely to express when we receive excess amounts of rainfall, particularly during July and August. Dry conditions, especially in the southern part of Michigan in July, made it more difficult to identify the foliar symptoms of the disease in August than normal. However, SDS was prevalent in many southwest Michigan fields this early fall and continues to spread to previously uninfected fields across this region.

SDS was first discovered in Arkansas in the 1970s and appears to have spread from there to most soybean producing states. We have been mapping the distribution of the disease in Michigan, although it is probably present in most counties at low levels; to date we have confirmed it in 28 counties. Although the disease has been more of an issue for soybean producers in southern Michigan, the disease has been confirmed as far north as Huron and Isabella counties. This disease is likely to become an issue for more farmers as the amount of disease inoculum may build in soil over time. 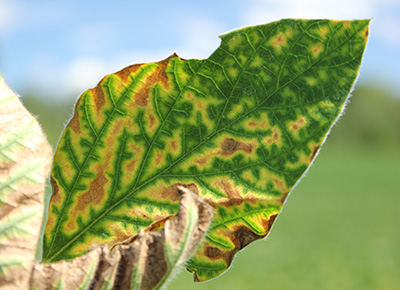 SDS is a difficult disease to manage and management options are relatively limited. If you suspect you have SDS, Michigan State University Extension advises you confirm it by submitting a plant sample, including roots, to MSU Diagnostic Services.

If SDS is a problem in your field, utilize partially resistant varieties. Although no variety is completely resistant, there are many commercially available lines with very good levels of partial resistance. We are also working with the MSU soybean breeder and private companies to identify new sources of resistance for improved plant protection.

Foliar fungicides are not effective against SDS as the fungus remains in the root system. Most fungicide seed treatments are not effective against SDS. However, Bayer CropScience recently registered the seed treatment ILeVO, which we have studied extensively. In our trials, ILeVO reduced the severity of SDS and improved yield compared to a base seed treatment for most varieties. It was also found to reduce soybean cyst nematode (SCN) reproduction. Although SDS can occur without SCN, heavy SCN pressure seems to exacerbate SDS. And, regardless of the interaction, it is always important to stay on top of SCN to minimize loses. 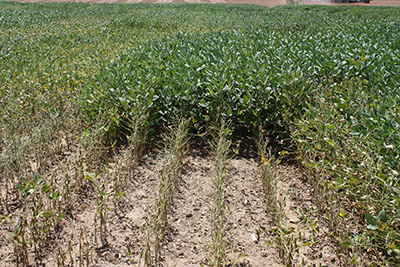 Studies have demonstrated that rotating to corn does not significantly reduce the amount of SDS fungus in the soil. However, a study conducted at Iowa State University has shown that a more diverse rotation can potentially reduce the disease. The researchers found that incorporating a third year into the rotation with either alfalfa or alfalfa and red clover significantly reduced the amount of SDS that developed in the subsequent soybean crop. More research is needed to understand the effect of crop rotation on SDS.

Improving drainage, soil structure and reducing compaction can also help to alleviate SDS severity. Movement of soil should also be minimized. Not only does movement of soil run the risk of introducing SDS to new fields, but also many other fungal and nematode problems. Early planted soybeans tend to develop more SDS. Although growers should not delay planting, infested fields should, if possible, be planted last in the planting sequence.

Fungicide resistance in frogeye leaf spot of soybean in Michigan