Michigan’s small fruit industry includes approximately 20,900 acres of blueberries, 750 acres of strawberries and around 500 acres of brambles, mainly raspberries, according to the Michigan Fruit Inventory 2011-2012. According to the USDA National Agricultural Statistics Service, in 2012 Michigan’s blueberry production was 87 million pounds, approximately 18 percent of the U.S. total and the farm level value was $122.7 million. On the other hand, strawberry production was 3.3 million pounds on 650 harvested acres with a farm level value of $4.8 million. For raspberries, there are not statistics available for production and farm value of production; however, there is an increased interest in raspberry production thanks to the “Buy Local” promotion. More people are buying fresh berries at local farms, increasing the importance of U-pick operations for the local economy.

Michigan State University Extension is serving this continually growing small fruit industry with technical assistance, training and educational programs to maintain this industry as an important source of income and employment. Pest problems and restrictions imposed by environmental concerns are among the multiple challenges small fruit growers need to overcome every year to maintain their competitiveness.

Since 2008, growers of berry crops in the West Coast states have reported higher costs of production due to spotted wing Drosophila (SWD), and there is also greater risk of having fruit rejected due to contamination.

Since its arrival in the eastern United States, growers of many berry crops have had significant challenges to manage SWD, but there are effective pest control tools that growers can use to meet the market demands for insect-free berries.

In 2012, Michigan’s berry growers (mainly blueberry and raspberry growers) reported similar challenges. In addition to fruit losses, the cost of combating this pest impacted substantially the growers’ economy since they had to invest an extra $100 to $200 per acre in pest control.

In response, the MSU Extension small fruit program offered small fruit growers a series of meetings and workshops to help them monitor, identify and manage the spotted wing Drosophila threat. From April 25 to November 2012, MSU Extension offered four classroom and hands-on workshops. During those events, growers received training materials with training notes for further review and were given the opportunity to handle fresh SWD specimens for identification and familiarization with the pest using dissection microscopes and hand lenses (see pictures at the end of this article).

In 2013, we are offering similar training. So far we have successfully concluded two out of three workshops programmed for this berry season. Training has been conducted at the MSU Trevor Nichols Research Center in Fennville, Mich., and at the Ottawa County Fillmore Complex in West Olive, Mich. The next training session will be offered on May 2 at the Lake Michigan College, South Haven Campus in South Haven, Mich. In order to provide maximum personal attention to trainees, the number of participants has been limited to 30 per session. For more information, please call or email Judy Hanson at 616-994-4580 or hanson26@anr.msu.edu.

We believe that combination of classroom and hands-on training of commercial growers, including underserved and minority growers, private consultants and IPM practitioners will make the difference in limiting the extent of the SWD threat in 2013. 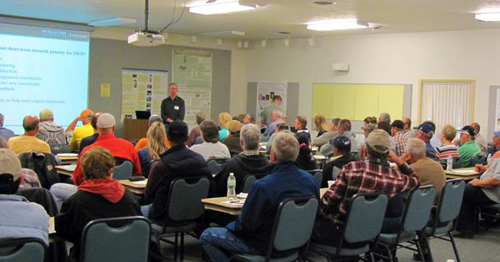 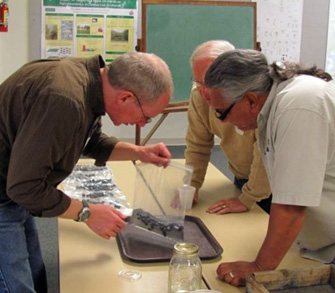 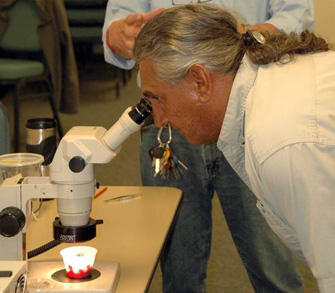 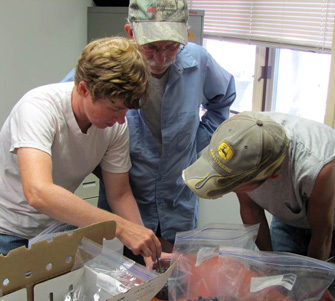 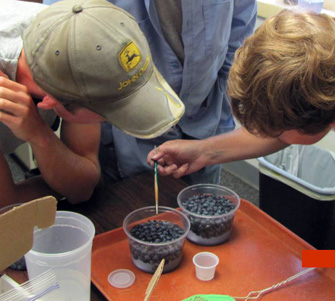