As part of Michigan State University Extension’s ongoing effort to increase efficiency and success in controlling spotted wing Drosophila (SWD) in tart cherries, SWD population patterns, anecdotal insecticide efficacy and the diversity of insecticide products used for SWD control were evaluated in the west central region of Michigan during the 2017 growing season in order to:

The work discussed below was conducted in northwest and southwest Michigan during the 2017 growing season in collaboration with Nikki Rothwell and Emily Pochubay at the Northwest Michigan Horticulture Research Center in Traverse City, Michigan.

We monitored 10 tart cherry sites in west central Michigan for SWD from May 15 through Sept. 15, 2017. Five deli cup traps per site baited with Scentry SWD lures were placed at each site. The first trap was placed at the block edge (0 meters) and each subsequent trap was placed every 25 meters, moving towards the center of the block. Both male and female traps were counted weekly.

Spray records for all 10 sites were collected at the end of the growing season and the product selection, interval between sprays and success or failure of the program was recorded. Programs were determined to be successful if the two-week pre-harvest, one-week pre-harvest and harvest fruit tests did not contain SWD larvae. The post-harvest fruit tests were not factored in to the determination of program success or failure; however, these numbers do remind growers of the potential for SWD to quickly build populations, particularly when insecticide use ends.

The first catch in the region occurred May 22 and we caught adult SWD in all 10 sites by June 19. After initial catches, traps generally caught flies each week through the post-harvest timing. We collected flies at all 10 sites and sustained catches were evident at least one full month before harvest. This information is a reminder to be diligent about SWD control in west central Michigan. In past seasons, adult trap catch increased later in the season, most often post-harvest, but more recently the potential for an orchard to be infested prior to harvest is much higher.

Make management decisions for this pest based on regional trap counts. After this season, SWD appears to be well-established, and all fruit that is susceptible to SWD (fruit that has lost its green color) should be actively managed. Adult fly catch over time in west central Michigan can be seen in Figure 1. 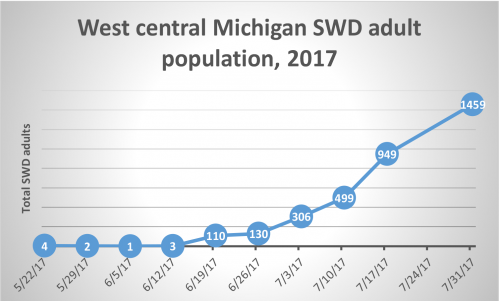 Growers in west central Michigan who began applications for SWD control approximately three weeks before their predicted harvest dates and made an application of an “excellent” material at least every seven to eight days were successful in managing SWD in 2017. Several growers used the same number of applications or programs, but differences between success and failure were contingent on how far intervals were stretched and when the SWD program was initiated.

An example of an unsuccessful program is shown in Figure 2. This table indicates all sprays made within five weeks of harvest, which is shown at the bottom right corner of both tables. The error made in this program was not product selection, but the timing of product. The 10 days on either side of the final application of Imidan was stretched too far, and fruits were contaminated one week before harvest. This result was typical when growers stretched insecticide intervals to nine to 10 days, especially within two weeks of harvest.

Figure 3 shows an example of a successful program that used the same number of sprays as the unsuccessful program (Fig. 2), but applications were not stretched and keeping tight intervals resulted in controlling SWD more effectively (Fig. 3). Three weeks prior to harvest, this grower used products rated excellent every six to eight days and had no contamination at harvest. This successful result using tight intervals was typical in the sites surveyed in west central Michigan this season.

Larvae were detected in the fruits in the one-week post-harvest check at all but one site. Growers did not manage SWD after harvest. MSU Extension is currently recommending no post-harvest sprays for SWD as this pest has many wild hosts in the environment and applying chemicals after harvest in commercial blocks would not reduce overall populations. Additionally, fewer insecticide applications minimize the potential for SWD to develop resistance to the classes of chemicals labeled for this pest.

West central Michigan tart cherry growers used pyrethroids and organophosphates to control SWD. We found only three sprays of the 10 farms and total number of SWD applications were products containing modes of action outside of the pyrethroid (Mustang Maxx, Warrior II, Perm-up) or organophosphate (Imidan) classes of insecticides. Delegate was downgraded from excellent to “good” following the 2016 growing season, and as a result, this product was not used in 2017. Likely based on economics, Exirel (diamide) was not used by west central Michigan tart cherry growers.

Because the number of insecticide applications for SWD control have increased, costs to managing tart cherries have also gone up. As a result, growers are trying to mitigate costs by using cheaper insecticides, such as the pyrethroids. However, lack of diversity in the chemical classes of insecticides for SWD control increases the potential for the development of SWD resistance. Ninety-five percent of SWD sprays used at these 10 west central Michigan sites were in two classes of insecticides: pyrethroids and organophosphates. 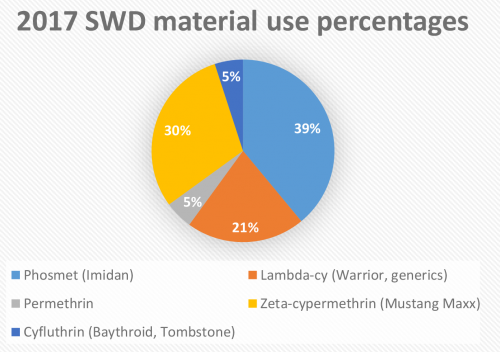 Comparison of number of SWD applications to growers in Northwest Michigan

Growers in west central Michigan added an average of 3.6 sprays to their programs to combat SWD in 2017. This difference is almost one full cover less than the northwest Michigan average of 4.38. This highlights the challenge that growers further north face due to a later harvest.

Our consistent early trapping of this pest this season in west central Michigan demonstrates that trap catch data, while useful to observe populations, should not be used to determine whether or not a spray in a block “worth it” once fruits are yellow. After this season, we think SWD is well-established in west central Michigan by the time tart cherries are physiologically susceptible and applications should be made based on regional trap catch data.

Growers in west central Michigan should not stretch any product, even those rated excellent, nine or more days, even if they started a program early to “get a jump” on the pest. This practice consistently resulted in larval contamination of fruit, particularly within two weeks of harvest.

In 2017, growers in west central Michigan had more success with starting their SWD sprays about three weeks before predicted harvest and keeping tight intervals (six to eight days) than they did with starting four weeks from harvest and trying to stretch the same number of sprays.

Additional data from MSU Extension from 2017 has shed light on additional important practices, such as row mowing and reducing canopy density that also significantly reduce risk of SWD infestation. The way forward for growers is going to transition into a systems approach that includes applying “excellent” products every seven to eight days while maintaining mowed row middles and actively pruning tart cherry trees with large canopies.

Good coverage is particularly important with this pest due to population size and density in fields. Growers should be re-calibrating spray equipment annually and making sure to slow down on sprays. Older air-blast sprayers should be recently calibrated.

This work was funded by the Michigan Cherry Committee and MSU Project GREEEN, and was done in close cooperation with the teams at the Northwest Michigan Horticultural Research Center and the Southwest Michigan Research and Extension Center. A special thanks also goes out to all ten farmers in Oceana and Mason Counties who participated in this work, and to my research technician, Sarah Springer.