Spring black stem is a fungal disease that can cause significant damage to alfalfa yield and quality. 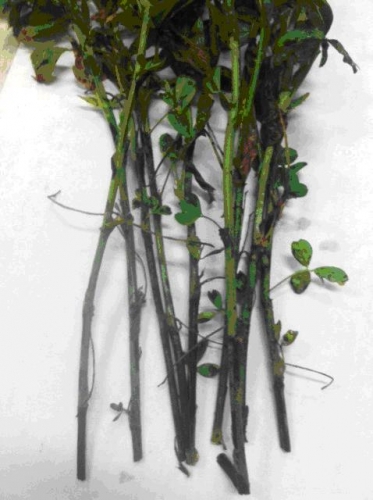 In checking spring growth of alfalfa fields this spring, it was noted that there were many established stands with extreme weed pressure. Upon further examination, the alfalfa plant itself was observed to have black spots on the stems and lower leaves. Alfalfa samples were taken to Michigan State University Diagnostic Services and were determined to be infected with ‘spring black stem’, a disease caused by a fungal pathogen, Phoma medicaginis var. medicaginis. This fungus survives on crop residue, stems and crown through the winter and summer in alfalfa stands and ooze spores during cool, wet weather – which occurred in Michigan in late fall 2011 and April 2012. The spores are splashed onto young leaves and stems during periods of rain.

Spring black stem is found early in the season and can reduce first cutting yields 40-60 percent in moderate to severely infected fields. Symptoms include black areas on the lower sections of the stem and foliar lesions appear as small black spots. Leaves become infected by spores splashed by the rain. Heavily infected leaves turn yellow and drop. It is recommended to harvest heavily infected fields early to prevent both yield and quality losses from leaf drop. Scout fields weekly to determine the extent of the disease and make cutting decisions.

Spring black stem is rarely a significant problem in new seedlings. Yield loss is due to stunted growth of infected plants and from stem death. The loss is likely only temporary as the alfalfa crown will put out new shoots. However, the dying alfalfa stem will allow weeks to grow and replace the alfalfa reducing quality. The fungus may spread to the crown and cause crown rot, death of emerging seedlings, and root rot of mature plants if weather conditions are favorable (60-75 degrees Fahrenheit and damp). After first cutting, the disease is rarely of significance, although the crown rot phase of the disease may continue to develop.

The effects can be minimized by managing alfalfa for optimal plant vigor – maintaining soil pH, harvesting regularly, and maintaining soil fertility. No cultivars with high level of resistance are available (University of Illinois). Commercial fungicide became available for use in alfalfa in 2010, however university trials in 2011 were limited and results were inconclusive (University of Wisconsin).