In many cities in southern Michigan and a few in the northern Lower Peninsula (like Traverse City and Alpena), bare spots are showing in golf course roughs and home lawns due to European chafer grubs consuming turf roots. The grubs tend to be concentrated in the driest areas: sunny areas, sandy areas, slopes and hilltops. It is unusual to see any grub damage in irrigated lawns or irrigated rough, but it can happen with a heavy grub infestation if the irrigation is infrequent or on the dry side. It is more likely that you will see turf damage from skunks, raccoons, or crows that tear or pull-back turf to eat grubs. You can confirm grubs as the cause of the problem by pulling up some turf around the dead patch and looking for C-shaped white grubs in the root zone.

European chafer grub damage will continue for another two weeks in southern Michigan and possible for another three to four weeks in the northern Lower Peninsula. Damage can be stopped and the grubs controlled by applying Dylox or Sevin to the affected area. Allow these products about one week to work before re-seeding the bare patches. There is no point in treating lawns in southern Michigan with insecticide after May 14, because the damage will be over for this spring.

The best way to prevent grub damage is to raise the mowing height, fertilize and irrigate lawns or rough. Healthy turf with a dense root system is unlikely to be damaged from grubs. However, for low-maintenance turf or for fairways, tees and greens, it may be necessary to apply an insecticide to prevent grub damage. The most effective products are the nicotinoid insecticides: Allectus, Aloft, Arena, Meridian, and Merit. These insecticides are very effective against grubs when applied between May 15 and August 15. For European chafer in the rough or in home lawns, the optimum time to treat is in the month of July. Mach 2, an insect growth regulator, can also be used in July. 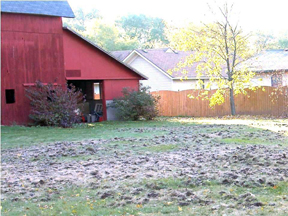 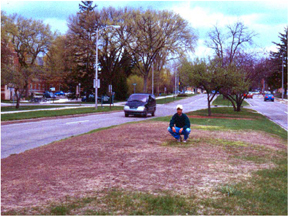